Mercedes needs to be "smarter" and "perfect" if it wants to beat Red Bull across the 2021 Formula 1 season, according to drivers Lewis Hamilton and Valtteri Bottas.

Mercedes endured a difficult pre-season test programme as the team struggled with rear-end instability on its new W12 car following the downforce cuts introduced for 2021.

Although Mercedes remained on the back foot over one lap in Bahrain, losing out to Red Bull's Max Verstappen in the fight for pole position, it fared much better over the long stints in the race.

Hamilton was able to defeat Verstappen in a close battle for victory, settled after Verstappen was forced to hand the lead back after overtaking his rival off track with four laps to go.

But the race came as a reminder to Mercedes of the stern challenge it faces from Red Bull in 2021 as the German team goes in search of an eighth consecutive set of world championships. 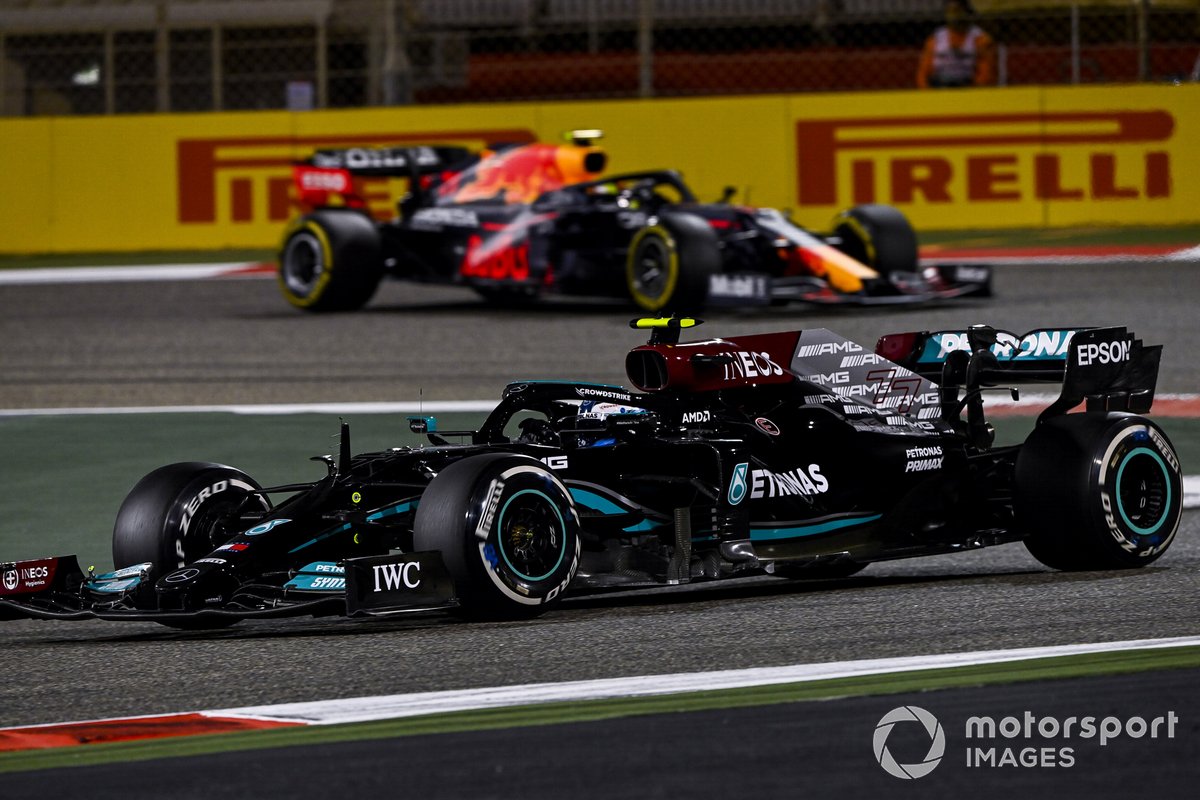 Reflecting on his race win in Bahrain, Hamilton conceded that Mercedes was "fortunate" to beat Red Bull thanks to Verstappen's off-track move, and that it had to perform better at upcoming races.

"I'm pretty sure we've got to do better," Hamilton said. "We've got to be smarter, and how we navigate through our weekends with the fact that we don't have the fastest car at
the moment.

"But that's all good for me. I don't mind having to pull out extra in order to make the difference."

Mercedes has won every world title since the start of the V6 hybrid era in 2014, with its most significant challenges coming from Ferrari across 2017 and 2018.

Hamilton and teammate Bottas have finished first and second respectively in the drivers' championship in the past two years, acting as a sign of Mercedes' advantage over the rest of the grid.

But the downforce cuts introduced for 2021 have hurt teams running a low-rake car concept - such as Mercedes and Aston Martin - more than those with high-rake cars.

Bottas finished third in Bahrain, 37 seconds behind Hamilton and Verstappen after a late pit stop, but struggled to contend with the leading duo throughout the race.

The Finn agreed with Hamilton's assessment that Mercedes currently trailed Red Bull for pure performance, saying the pace of the W12 car "still needs to be better".

"Red Bull seemed really quick, and I look forward to see on replay the closing lap between Max and Lewis," Bottas said.

"We don't have the fastest car at the moment, we need to be perfect in every other area.

"But we obviously want to have the fastest car as well, so we need to keep working."