The papaya orange and blue livery on McLaren's 2018 Formula 1 car was inspired by fans and not just "an emotional decision", according to executive director Zak Brown

McLaren's new MCL33, launched on Friday, has a mostly-orange design punctuated by blue on the front-wing elements, engine cover fin and rear wing, similar to colours used on its early F1, Can-Am and Indycars in the early 1970s.

Last year's switch to an orange-and-black livery, which did not use the papaya colour, was met with criticism that McLaren had not gone far enough in referencing its history.

"Our return to a papaya orange livery for this year wasn't simply an emotional decision," said Brown.

"It demonstrates that we are listening to our fans, building deeper engagement with them and the Formula 1 community as a whole.

"We want McLaren to earn respect on and off the track, and this felt like a good starting point.

"We want to show everyone what makes this team special, whether that's our fans or our partners - there's room for more on our journey."

McLaren developed the colours, which it is calling "Papaya Spark" and "Burton and Cerulean Blue", for the livery itself in conjunction with chemicals company AkzoNobel.

It claims to have "significantly" reduced the weight of paint and "decreased paint processing time by more than 50%". 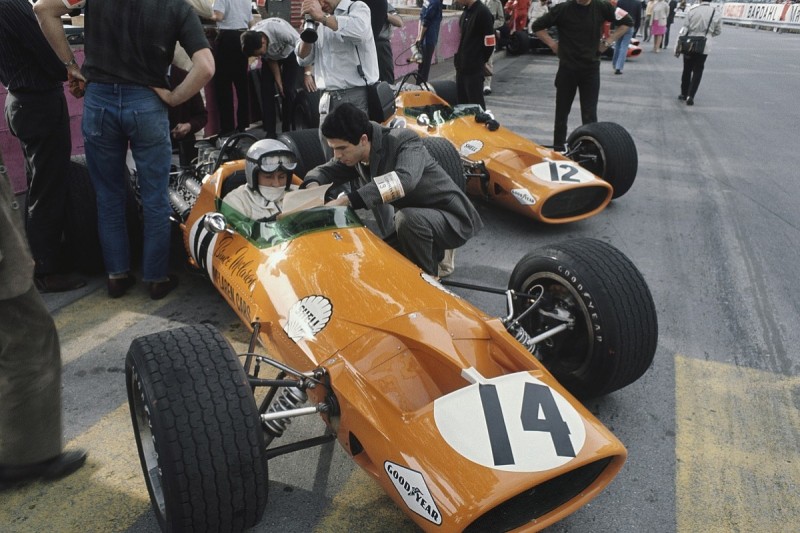 Papaya orange first featured on McLaren's F1 cars in 1968, and McLaren shareholder Mansor Ojjeh said it was "fantastic" to go back to the "classic" colour ahead of an important season, for which McLaren has switched engine supplier from Honda to Renault.

"It's imperative that McLaren looks to re-establish itself on the track this year," he added.

"Off-track, we have been working as strongly as ever.

"This year's car is the result of a fantastic amount of teamwork and effort, of which we can be hugely proud.

"It's fantastic to be able to return McLaren's grand prix cars to the classic papaya orange livery they once sported in the 1960s.

"They look incredible, and really underline the fearless spirit with which we attack the new season."

McLaren F1 launch: No 'shortcuts' in swap from Honda to Renault