Marussia insists its bid to get back on the Formula 1 grid for 2015 is viable, and that it will satisfy all the required conditions to return

Force India voted against a proposal to allow the revived Marussia team - which went into administration after last year's Russian Grand Prix - to begin the 2015 season with its '14 cars.

Marussia has now issued a statement saying that last month the F1 Strategy Group indicated that it would allow the use of 2014 cars if modified to meet this year's rules, with exceptions allowed for articles 3.7.9, 15.4.3, 15.4.4 and 16.2, which relate to frontal bodywork and the front impact test.

Force India deputy team principal Bob Fernley told AUTOSPORT that his squad was not opposed to Marussia's return, but felt the information it had supplied to the Strategy Group was inadequate.

Graeme Lowdon (pictured below with Bernie Ecclestone), who had been sporting director of Marussia, rejected Fernley's criticisms and said every effort was being made to ensure the team could race.

"I was surprised to hear some of the comments made today, particularly regarding an application we were said to have made to yesterday's meeting, which I can confirm was not the case," he said in a statement issued under the Manor GP name.

"We did make a request on 17 December last year and we have been working since to satisfy the requirements subsequently communicated to us, specifically complying with all the regulations, aside from the exempted articles. 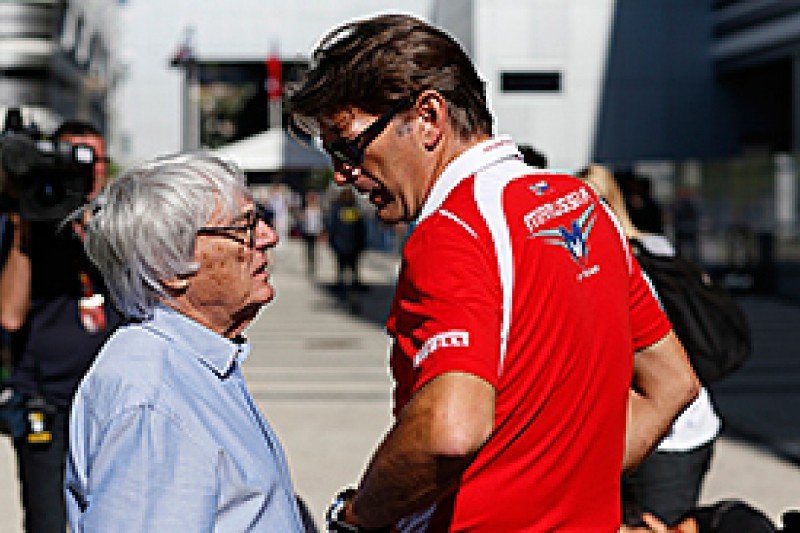 "The comments also mentioned that issues of compliance were raised, that it was felt that our application lacked substance and contained no supporting documentation to reinforce the case for offering special dispensation.

"Again, we did not make any application to yesterday's Strategy Group meeting and nor were we asked to.

"Instead, we are proceeding with our clear process regarding compliance and building our operation.

"We are doing everything possible to adhere to the process set out for us to return to the 2015 grid."

One of Fernley's concerns had been the anonymity of Marussia's new investors, but the team's statement said that revealing full details would be inappropriate at present.

"Given the confidential nature of the negotiations under way, neither they nor the team are able to provide further details regarding the team's new investors, however those investors have either met with or spoken to the key F1 bodies," it read.

The statement added that work was in progress to both modify the 2014 Marussia and to prepare a'15 car "to ensure it can supersede the 2014 car as soon as possible".

It said Marussia had "a significant number of staff" at work on both projects.

"It also has the benefit of being able to recruit further staff very quickly from the rich pool of experienced and talented F1 personnel who were left unemployed following the closure of Marussia and Caterham and due to job cuts made by other teams in the sport," said the statement.

Why F1 testing isn't on TV