A slow start off the line for both front row-starting Mercedes was compounded on lap one when Hamilton went off at the chicane and ran through the gravel trap, dropping him to 11th.

Hamilton then fought his way back through the field to fourth, with a safety car later appearing to aid his cause by bunching up the field.

The championship leader, though, collided with Daniel Ricciardo at the restart, requiring not only a new front wing, but also earning a drive-through penalty for the incident.

Despite his issues, Hamilton still managed to finish sixth, opening up a 21-point cushion over Rosberg who came home eighth due to tyre problems and his own clash with Ricciardo late on that resulted in a puncture.

"What a day, that was a hard afternoon," said Hamilton. "I definitely had a bad day at the office.

"It was one of the worst races I think I've had, and all I can do is apologise to the team and work hard to make amends at the next race.

"A day like today, when you make mistakes and it affects the team, it hurts."

Rosberg was running second on lap 64 of the 69-lap race, with eventual winner Sebastian Vettel in his sights, when Ricciardo overcooked an overtaking move into Turn 1.

As the duo emerged out of the turn, Ricciardo caught the right-rear tyre on Rosberg's car with his front wing, causing a puncture and a time-consuming run back to the pits for the German for a change of rubber.

Assessing his race, Rosberg said: "I was very pleased with it until lap 64, and after that, just nowhere. 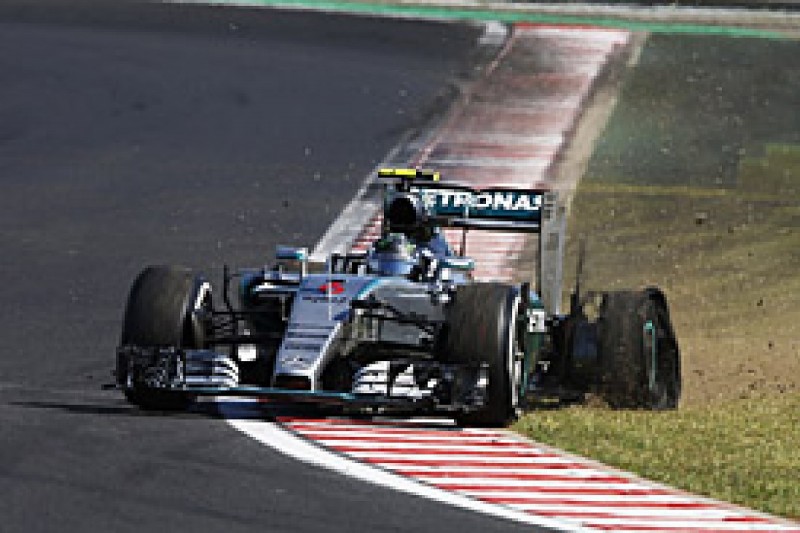 "That's a real pity. Sport is real tough sometimes, to lose all those points, but that's the way it is.

"With Ricciardo, I assumed it was my corner because I took the ideal line and he just went straight on because he braked very late, or too late.

"He still had his front wing there and didn't back out of it, but the FIA decided no action, so nobody has fault then I guess."

Mercedes motorsport boss Wolff felt Ricciardo's move was "questionable" and it was "more of a mistake" of the Australian, but like Rosberg he accepted the stewards' decision.

As for the race overall, Wolff added: "For us, it was incident packed. We had more incidents in this one race than we did throughout the season.

"We knew that day would come, and it was today. It was a nightmare for all of us."