Ferrari Formula 1 driver Charles Leclerc has explained why he did not pass Max Verstappen during the Emilia Romagna Grand Prix winner's brief off at the race's safety car restart.

Verstappen was leading the pack around for a rolling start following the race's suspension after the massive accident that eliminated Valtteri Bottas and George Russell, but lost control of his Red Bull at the first Rivazza turn just before he was due to resume racing speed.

The Red Bull speared left over the kerbs on the corner's inside, but critically appeared to keep at least some part of one of his right side wheels on the track throughout the incident – his right front being back on the track when his right rear briefly came off.

When asked by Autosport if he had considered passing Verstappen or simply chose to back off, Leclerc replied "I did both" before explaining he was right not to try passing because of Verstappen just being still on the road ahead.

In any case, if Leclerc had gone by, Verstappen would have been allowed to try and get back past so long as he did so before the first safety car line, as rolling start restarts are considered to be the same conditions as a race formation lap - something Leclerc had benefitted from when he spun off at Acque Minerali ahead of the initial start.

Leclerc would likely have not been penalised for overtaking Verstappen had he done so as a result of the rules distinction for rolling starts, unlike the race's earlier safety car overtaking incident involving Sergio Perez, who “upon rejoining the track [after going off at Piratella under the Nicholas Latifi/Mick Schumacher safety car], he then passed the two cars that had proceeded on the track past the point of his incident, which he was not entitled to do”, per the Imola event stewards.

"I considered it," Leclerc continued, "at one point, but I at the same time backed off. I think looking back at it, it was the right choice because I think he always had one wheel on the track.

"And so, I backed off and because he didn't completely spin, obviously, as we've seen. So, I thought about it but it was too late and he was already back in front. 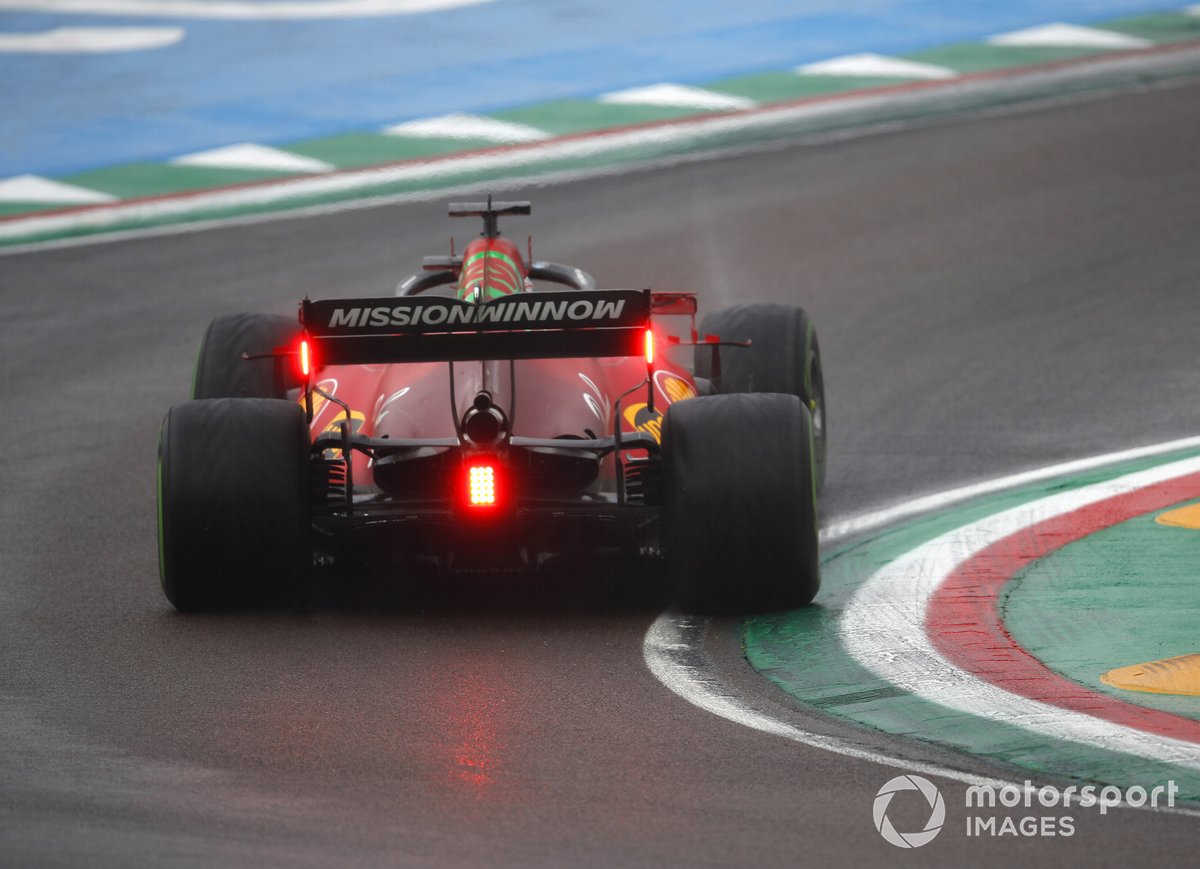 Verstappen described his "moment in the restart" as "a big one", before joking that "there was some secret tyre warming going on!"

McLaren's Lando Norris, who was following the pair and overtook Leclerc when he lost ground to Verstappen when the leader finally took the pack back to racing speed just before the finish line a few seconds after the Rivazza incident, disagreed with Leclerc's decision.

"I had a great view of it – it's quite funny," he said. "I think Charles could've gone past, in my opinion.

"At that stage, Max was out of control and going left and Charles can't just hit the brakes and slow down and stop, at some point he has to go past Max because he was facing the barrier for a lot of the corner.

"I dunno – we have to maybe ask the guys in charge what the exact ruling is.

"But going off track, then it's all four wheels off track and the example of yesterday [where Norris lost his best Q3 time for fractionally running too wide at Piratella].

"But at the same time, Max was going very slow so it's like Leclerc could've driven past him at that point.