Hamilton's effort was still good enough to finish the day second overall, with Valtteri Bottas taking over driving duties for Mercedes for the afternoon.

The Finnish driver's prime focus was on completing a race simulation, his best lap of 1m22.986s only ending up seventh on the leaderboard.

Despite a lurid sideways moment at Turn 9, Bottas managed to rack up 102 laps in the W08, running with the double T-wing trialled this morning by Hamilton for much of the afternoon.

That left Mercedes with a combined total of 168 laps for the day.

Max Verstappen gave Red Bull the third best time of the day, a 1m22.600s, on soft tyres, four thousandths ahead of the Haas of Kevin Magnussen, running on super-softs.

On his second full day of running, Magnussen completed a total of 119 laps, with Raikkonen the only other man to break into three figures with 108 laps on the board. 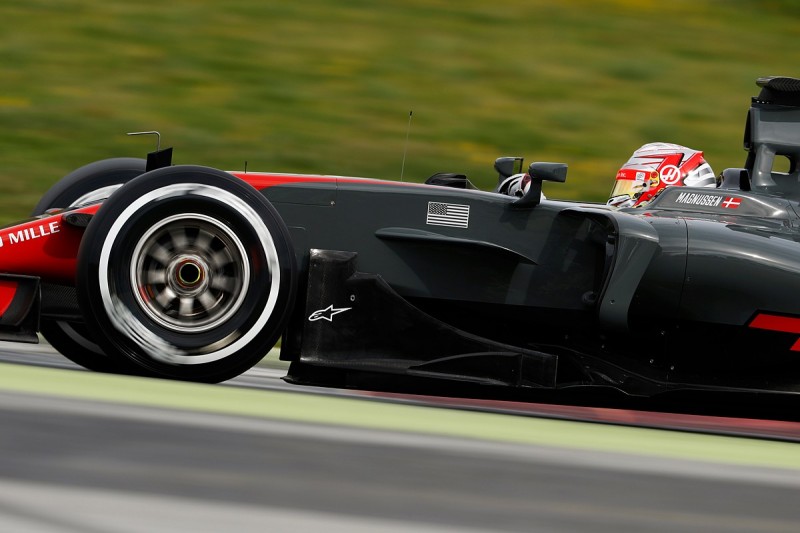 Esteban Ocon was fifth for Force India on super-softs, ahead of Daniil Kvyat's Toro Rosso on softs, Bottas and the Renault of Jolyon Palmer, which completed 53 laps after managing just an installation lap in the morning.

Antonio Giovinazzi, who was ninth fastest, also managed to log 67 laps in the Sauber after an engine problem robbed him of much of the morning session.

Besides Lance Stroll, who sat out the afternoon after his spin during the morning session caused damage Williams needed extra parts to repair, the slowest man of the day was McLaren's Stoffel Vandoorne.

The Belgian made his first on-track appearance of the afternoon with just over two hours to go, after McLaren spent the best part of five hours replacing the MCL32's power unit, but only managed a further 11 laps on top of the 29 he did in the morning.