The Polish driver crashed out in the early stages of Q1 at Suzuka after dropping a wheel on to the grass on the run down to the start-finish straight.

His Williams car ran off into the barriers and was too badly damaged to get fixed in time for the start of the race.

Williams confirmed immediately after qualifying that it was attempting to build up a new chassis for him, but was facing a tight schedule to do so because of the condensed programme.

A Williams spokesperson said: "We have parts but it's a chassis change so huge amount of work. It will be tight but they are doing everything they can and I'm confident they can do it."

Speaking to Sky after the session, Kubica suggested that a number of factors had contributed to the crash.

"It was a high price for a relatively small off," he said. 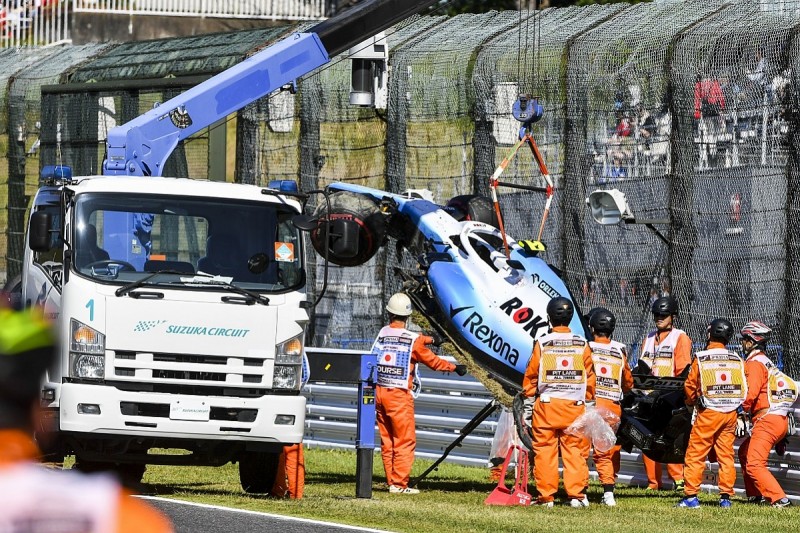 "I just accelerated opening the lap and probably there were a few factors that contributed to this.

"I put the rear wheel slightly off the track and missed the space and that was over.

"I was on the grass and the wall came quite quickly.

"I think there were a few factors which was contributing - I don't want to go into the details, but all stories started before qualifying."

Kubica will start from the pitlane if Williams is able to prepare his car in time for the race.

In addition to Williams's efforts to put a car together for Kubica, Renault's engineers are in the process of replacing the parts on Nico Hulkenberg's hydraulic system, which contrived to put him out of the second part of qualifying.

Hulkenberg was instructed not to change gears part-way through Q2, as race engineer Mark Slade cited "a major problem" over the radio.

Meanwhile, Kevin Magnussen receives a five-place penalty as Haas has changed his gearbox following his accident in Q1, but his grid position remains unchanged thanks to Kubica's pitlane start.