Mercedes Formula 1 boss Toto Wolff believes his team will face a dogfight with Red Bull at this weekend's Bahrain Grand Prix, as the W12 car was "inconsistent" in practice

But beyond single lap pace, of which Friday practice painted an opaque picture, a bigger concern for Mercedes is the W12's recurring rear instability.

Hamilton and Bottas already struggled with stability issues across the three-day Bahrain pre-season test, exacerbated by the gusty conditions at Sakhir.

While the Brackley team made inroads during Friday's pair of one-hour practice sessions, Mercedes' long runs indicated it will face a fierce battle against Red Bull, which team boss Wolff dubbed as a "dogfight".

"The conditions haven't come towards us. It's just a real dogfight," Wolff told Sky Sports F1. "When you overlay the fastest laps and even the long runs, it's just so very close that every kilogram in fuel load can make quite a big swing. So we don't really know.

"I think we are definitely closer here than we have been in testing. But I wouldn't know what the position is versus Red Bull."

During second practice Bottas was the most vocal about his car's ill-handling, at one point calling the W12 undrivable.

Afterwards, the Finn believed his car "felt better than in testing" and added the 'undriveable' call was partly down to how his tyres behaved on a long run. 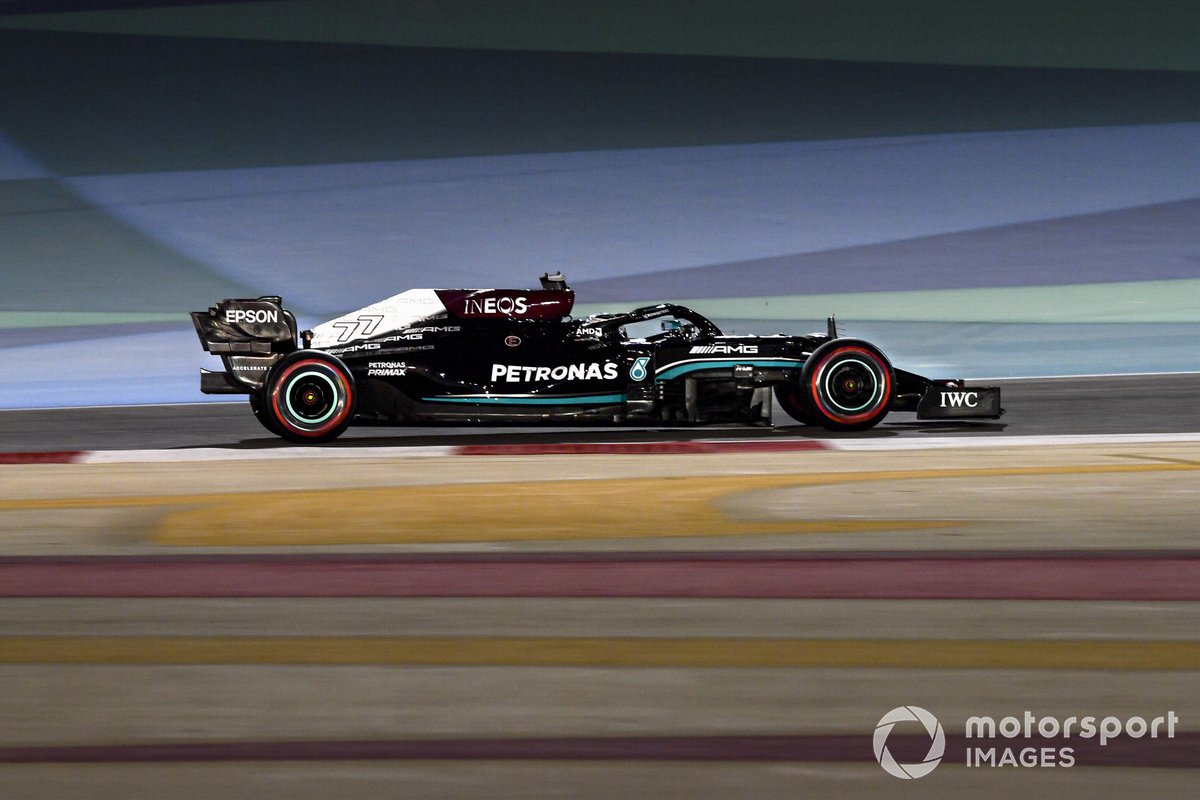 "It felt better than it did in testing in terms of how the car was feeling - so that's good - but also it felt like we're not yet there in terms of car balance," Bottas explained.

"The inconsistency in the balance and especially in the rear of the car was one big highlight.

"The last long run we did was pretty inconsistent and didn't really put any laps together. The car as I said was undriveable at times. So a big hassle, but it's Friday and that's why we practice.

Bottas doesn't rule out being able to challenge Red Bull for the win but says his team will have its work cut out to get there.

"I think the main thing in my mind is we have plenty of work to do if we want to fight for the pole and the win," he said.

"We are definitely in the mix. McLaren looked strong today, Red Bull as expected. I think we are there, I don't think we're the fastest at the moment but we're not far off and we have a clear target where we want to be."

On Saturday conditions are expected to worsen with even higher wind speeds, which Hamilton fears could make it harder for Mercedes to get on top of its stability issues.

"That's not great for us, the rear being unstable as it is," Hamilton said when asked about the gusty winds. "But everyone I'm sure will be in the same boat; some more, some less.

"For the people watching and trying to understand, it is when you approach a corner and the rear moves, and you're trying to find that tipping point. But the tipping point is further away with more downforce on the car and now it falls away much quicker than normal.

"It's about having a stable car and how to make the tyres last. That's going to be key in this climate and with the wind that we have here.

"Naturally, the performance we've lost on tyres this year doesn't help, but we'll work away at night trying to find a way."