Hamilton was outqualified by Bottas at the Hungaroring, but was allowed to overtake in the race to try to attack the leading Ferraris.

Unable to make progress, Hamilton handed third back to Bottas at the finish. Hamilton said that was a turning point partly for helping Mercedes' harmony, but also because it made him determined to prevent further team orders dilemmas.

"We did a great thing for the team that had a positive ripple effect," said Hamilton during Friday's FIA prizegiving.

"It was a really positive thing that I let Valtteri back past and finished fourth.

"I went into that break and mentally I was like 'I don't ever want to be in a position, or even put the team in a position where they have to decide whether we're first or second'.

"I was like 'from now on, I need to be ahead every single time' and then there'll never, ever be the question or whether Valtteri should let Lewis past and those kind of things.

"I made sure that I studied what I'd done at the beginning of the year and applied everything I'd learned to the second part."

The Hungary result left Hamilton 14 points behind Vettel, but he then won five of the next six races and ultimately claimed the title.

Hamilton also outqualified Bottas at every race after Hungary until his Brazilian GP qualifying crash.

At the 2016 FIA gala, Hamilton's previous team-mate Nico Rosberg had announced his shock retirement days after securing the title.

Hamilton said he had used that as a spur to be more "positive" in 2017.

"We lost a member of the team last year, obviously retiring, and I really wanted to make sure I brought a new positive, restructured me to the team and into this season and to really lead the team to the world championship, which I did," he said. 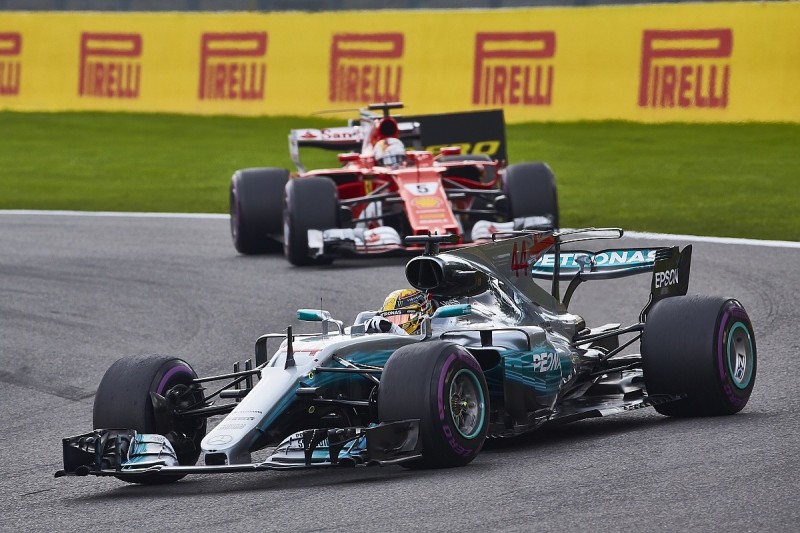 He reiterated that having an external title rival in Ferrari after three years of intra-team championship fights with Rosberg had been good for him and for Mercedes.

"It was just a much more enjoyable battle," said Hamilton.

"When you're fighting against another team, the energy within the team is so much different.

"When you meet all the engineers and you go round and see what they're working on and how they're doing, they ask you questions and they're like 'we want to beat Ferrari, we want to be the best we can be'.

"It's different to the previous year when you may have had an advantage and it was just between the drivers. Then it was like 'we don't really care who wins'.

"It's a different vibe. When their confidence is in you that you can potentially drive them to beat the other team, there's a different engagement from everyone.

"There was just a unified powerful force towards one goal."