Lewis Hamilton believes Mercedes had no choice but to stick to a one-stop strategy to try and beat Formula 1 title rival Max Verstappen in Sunday's French Grand Prix.

Hamilton fell to a late defeat to Verstappen at Paul Ricard after an aggressive switch to a two-stop strategy paid off for Red Bull.

Hamilton took the lead from Verstappen on the opening lap after the Red Bull driver ran wide at Turn 2, only to drop behind again at the first round of pit stops.

Verstappen ran less than a second clear of Hamilton in the Mercedes behind shortly into the second stint, only for Red Bull to bring him again at the end of Lap 32.

Mercedes stuck to its plan and kept Hamilton on a one-stop strategy, but the seven-time world champion was unable to keep Verstappen back as he reclaimed the lead on the penultimate lap. 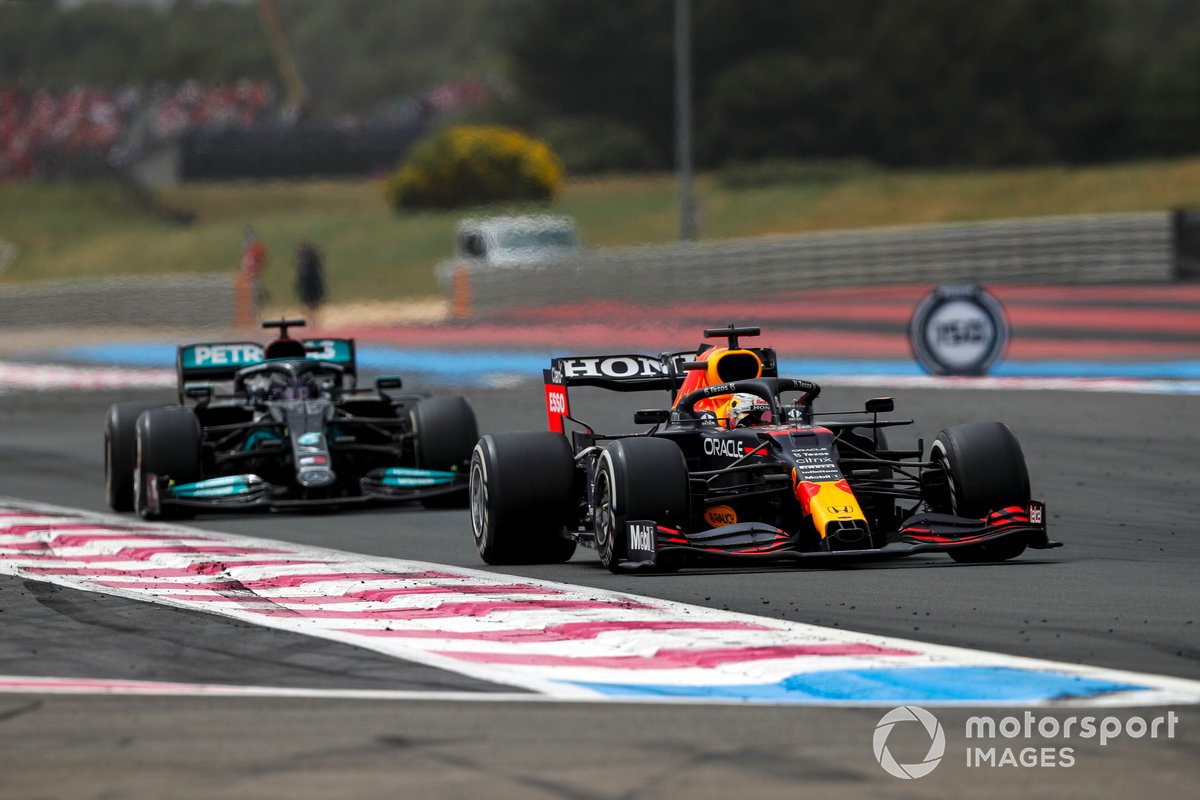 "Congrats to Max, he did a great job today," Hamilton said after the race.

"They just had the better straight [line speed] all weekend, and I think just considering that we had such a difficult Friday, I'm really happy with today's result.

"Of course we didn't win, and we were in the lead, but I had no tyres left at the end, so yeah unfortunately lost the position. But still it was a good race."

Hamilton was heard regularly discussing the condition of his tyres throughout the race. After Verstappen pitted, Mercedes radioed Hamilton and said, "let us know what you think", but did not bring him in again.

But Hamilton felt Mercedes had to stay out as pitting in response to Verstappen would only have brought him out behind once again.

"He was already quite far ahead, so the only option I really had was to stay out," Hamilton said.

"Otherwise again, he was undercutting me , so he would just come out ahead and I wouldn't be able to pace as they are too quick on the straights.

"So, the only option was to stay out as long as possible and hope that the tyres held together."

The result marked Red Bull's third win in a row and saw Verstappen extend his lead at the top of the drivers' championship to 12 points over Hamilton.

"We've got to find some pace, that's for sure," Hamilton said.

"You can see most of the time we lost today was just on the straights, so we've got to definitely dig deep, try to figure out why that is, whether it's power or drag.

"But we've still got a good package."

Hamilton said that he was "not really sure" how he had dropped behind Verstappen in the first round of pit stops, only to be informed that the powerful undercut meant the extra lap he stayed out had cost him.

"We didn't know how strong that was going to be or not," Hamilton said.

"But what was really surprising was to run out of that front tyre early on, but obviously they had a good strategy and it worked really well today."