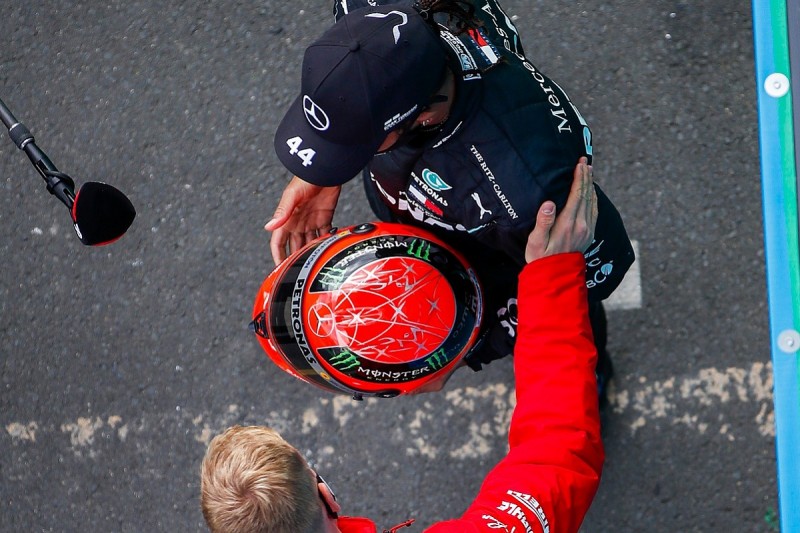 Hamilton recovered from qualifying second and trailing Mercedes team-mate Valtteri Bottas to win the Eifel Grand Prix after taking the lead shortly before the first round of pit stops.

A late safety car gave Red Bull's Max Verstappen a chance to try and catch Hamilton, but the Mercedes driver never looked at risk of losing the race, going on to record his seventh win of the season.

The result saw Hamilton draw level with Schumacher's record of 91 race wins that has stood since his final victory at the 2006 Chinese Grand Prix.

To mark the achievement, Schumacher's son, Formula 2 driver Mick Schumacher, presented Hamilton with one of his 2012 Mercedes F1 race helmets.

"I'm honoured, I don't even know what to say," Hamilton said.

"When you grow up watching someone and you generally idolise them, really just in terms of the quality of the driver they are, but what they're able to continuously do year on year, race on race and week on week with their team.

"Just seeing his dominance for so long, I don't think anyone, and especially me, didn't imagine that I'd be anywhere near Michael in terms of records.

"So it's an incredible honour, and it's going to take some time to get used to it."

Hamilton had regularly batted away questions about the significance of the record in the build-up to the weekend, and conceded he only realised he had matched Schumacher when he entered the pit lane and saw the light hoarding.

"Honestly, as I came into the pit lane, that's when I realised that I'd equalled." Hamilton said. 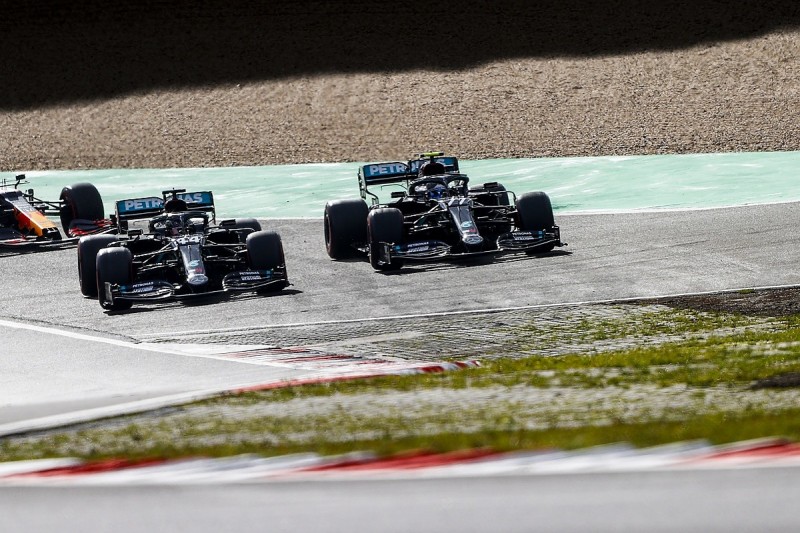 "I hadn't even computed it once I crossed the line, so I couldn't have done it without this incredible team.

"Everyone, continuing to push behind me, and given it their everything. So a very big thank you and huge, huge respect."

Hamilton made a good start and went wheel-to-wheel with Bottas at the first corner, with both Mercedes drivers running wide before Bottas got the cut back at Turn 2.

"We had a good start, going up alongside Valtteri, and we both understeered at the first corner so I tried obviously to give him as much room as possible," Hamilton explained.

"Then he was in my blind spot, so I didn't know where he was after that. I moved as wide to the outside he came back, he did an amazing job.

"I remember coming out of that corner thinking, 'good on you man. I'm impressed, that was good.'"

Hamilton then took the lead on lap 13 when Bottas locked up at Turn 1 and ran wide, and would remain at the head of the field until the end of the race.

"I just had to make sure that I tried to hang on to him for as long as possible," Hamilton said.

"I managed to look after my tyres really well, where I could see he was graining his front tyre, so I knew the next couple of laps was the time for me to push, and then he had the lock up.

"But it was not an easy race at all. The Red Bulls are so fast. Max drove extremely well. I think the one place and chance he had was at the restart, but I managed to pull away, pull a nice gap.

"But you can see their pace at the end. We've got a serious fight on our hands."