Lewis Hamilton believes it would have been “tough” to beat McLaren’s Lando Norris in Sochi before a late rain shower helped the Mercedes driver score his 100th Formula 1 win.

Hamilton dropped to seventh on the opening lap of the race, but recovered to sit second behind Norris after the pit stop cycle was completed, trailing the McLaren by nine seconds.

But Hamilton was able to make significant gains with clear air ahead of him, whittling the gap down to just over one second with 10 laps to go before telling his Mercedes team that it was hard to get any closer.

Incoming rain prompted a number of drivers to dive into the pits for intermediates, with Hamilton eventually coming in at the end of Lap 49 to make the change.

Norris stayed out, only for the rain to grow heavier and leave him tiptoeing around the track as well as spinning, causing him to drop all the way back to eighth following a pit stop.

It meant Hamilton was able to cross the line to score his 100th grand prix victory, becoming the first driver in F1 history to reach the landmark, as well as reclaiming the championship lead.

Speaking after the race, Hamilton heaped praise on Norris after the McLaren driver came to hug him during the parc ferme interview.

“Lando does such an amazing job, he had incredible pace, he's doing such a great job for McLaren and it's very bittersweet obviously to see my old team ahead,” Hamilton said.

“They're doing so well, they won the last race so, you know, they're doing fantastic obviously powered by Mercedes, so it's good to see them united again, and obviously the team made a great call right at the end.

“I didn't want to let Lando go, and of course I didn't know what the weather was doing, but I'm incredibly grateful to all these men and women that are here and back to the factory.” 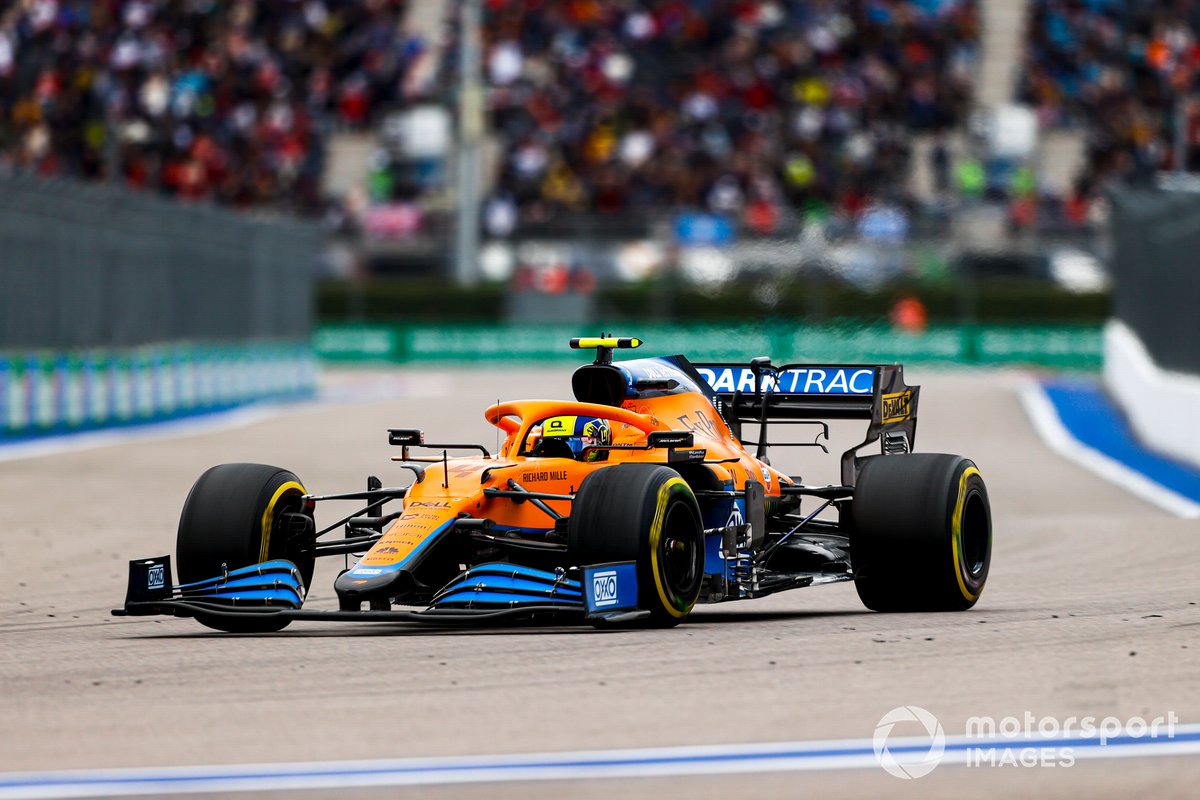 Hamilton doubted he would have been able to get past Norris had the rain not come and shaken up proceedings late on.

"It would have been tough to have got past Lando, he had great pace and had the fastest lap,” Hamilton said.

“It would have been tough to pass unless we caught some traffic or something, or he made a mistake which he's not been doing at all.

“Then the rain came and it was very opportunistic. As I said, the team did an amazing job, so a big thank you to them.”

Hamilton’s hopes of pulling out a big lead in the drivers’ championship were ultimately dashed as title rival Max Verstappen recovered from P20 on the grid to finish second thanks to the late rain.

It means Hamilton only sits five points clear at the top of the standings with seven races to go this year.

“There's nothing I can do about who's behind me,” Hamilton said.

“That’s the dream result for Max, naturally, but I'm grateful for the points.”