Lewis Hamilton says agreeing his new Mercedes Formula 1 contract is "probably" a formality, but that sitting down for talks is "not a priority right now"

Six-time F1 world champion Hamilton is currently in the final year of his contract with Mercedes, but has said for many months that he has no intention to leave the team.

Hamilton is one of the few drivers on the 2020 grid yet to formally confirm his plans for next year, but previously spoke about not wishing to rush contract talks amid the ongoing global pandemic.

Asked on Thursday for an update on where talks stood, Hamilton said he and Mercedes "haven't really spoken much about it".

"At some stage I guess we have to sit down and have the conversation. But it's not a priority right now.

"Getting the job done this year, for me personally, is the priority. So that's what I'm solely focused on right now."

Hamilton is on course to win a record-equalling seventh F1 world title this year. He currently leads the F1 drivers' championship by 69 points with six races remaining in the season.

He now sits joint-top of the all-time F1 win table after scoring his 91st victory at the Nurburgring two weeks ago, matching Michael Schumacher, putting him in a strong position in contract talks. 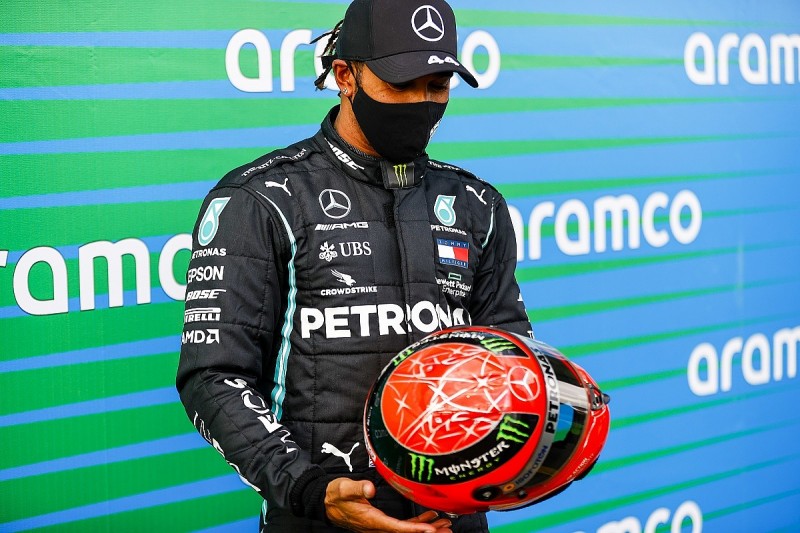 Hamilton has previously always signed three-year contracts with Mercedes, but said there were a number of factors to consider when it came to defining how long he wanted his next deal to be, including the pandemic and the financial pressures currently being placed on companies.

"As I said, I haven't made any decisions," Hamilton said when asked by Autosport about the conditions for contract talks.

"I do want to stay, and I think when we do sit down, normally [when] we plan, it's been three-year periods, but of course, we're in a different time.

"Do I want to continue for three years is also a question - there are many, many questions still to be answered, and we're also going into a new era of car in 2022. It kind of excites me what could happen in 2022 in terms of what the cars are like.

"I think if you look short term, you could say there are going to be companies and businesses that are going under during this time. Mercedes are, I would say, on the climb back. They're now in a much better place, but everyone has had a big hit this year.

"But if you look at the future, the future's bright. I think there's going to be some changes.

"You see I think Ola [Kallenius] came out with a new plan that Mercedes has moving forward in terms of sustainability, in terms of pushing their cars more to electric, and the same with AMG. I think the future is bright.

"These are all things we will naturally speak about, but I think I've earned the right or the position so far to be able to stay for a decent amount of time.

"Time will tell. I can't really say too much more. Hopefully you'll hear something in the next couple of months."