Grosjean was seventh quickest in qualifying and will start Sunday's race sixth, best of those behind Mercedes, Ferrari and Red Bull, as Haas continues to excel at the Red Bull Ring.

The Frenchman ended up half a second slower than Max Verstappen in the nearest Red Bull, but felt he would have been closer if he had not stopped on track with an electronics problem.

"At one point I thought maybe we could try to get a Red Bull but it was a bit too optimistic, so very happy with what we have," said Grosjean.

"In Q3 I only did my lap on scrubbed tyres, because we had only one [fresh] set of tyres and when we went out with the issue I stopped the car.

"But I'm very proud of my last sector, which is already more than the car can do - two hundredths from the best here.

"I'll try to keep P6 as much as I can, or get a good start, then I won't lose time just battling for 71 laps trying to close the door."

Grosjean admitted he was surprised by Haas's upturn in form in Austria, having struggled for pace in the previous races in Azerbaijan and Canada.

"I was coming here not expecting much," he said.

"We've been working hard and sorting out problems back home.

"We got here and the car actually worked better, I guess, with more of a conventional set-up than we were [using] recently.

"I think the fact that we were not fast in the straight line in the last two races, we had to take so much downforce out that the car became very, very tricky to drive, and of course problems are more obvious when you've got low grip." 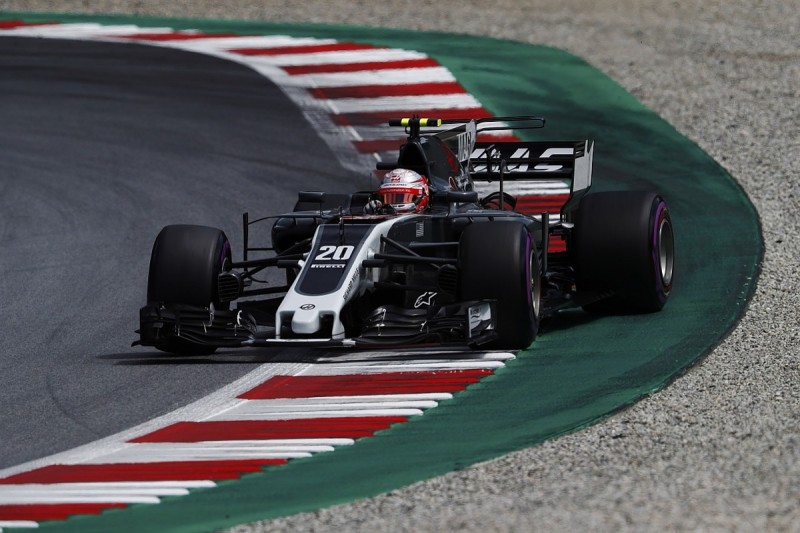 Team-mate Kevin Magnussen will only start 15th after an upper wishbone broke on his rear suspension at the end of Q1, preventing him from taking part in the rest of qualifying.

Haas will evaluate the gearbox to see if it was damaged as a result of the failure, and may have to change it and take a grid penalty.

Magnussen had no doubts he would have been able to challenge Grosjean for a row-three start, which the Frenchman gains by Lewis Hamilton's five-place grid penalty.

"I've been in front of him all weekend," said Magnussen. "It's very annoying and frustrating.

"Although we were competitive the field is very close, we won't be a second faster than the guys around.

"You need that to be able to overtake.

"It's going to be difficult if it's just a normal dry race."