Romain Grosjean says he will never drive a racing car that doesn't have a halo, as he admits he is now a bit more reluctant about a move to IndyCar

The French driver is still recovering from burns and bruising that he suffered in an horrendous crash at last weekend's Formula 1 Bahrain Grand Prix.

With his escape from the burning wreckage of his Haas being testament to modern safety standards in F1, he says he feels a "duty" to help drive forward further improvements in the future.

And he confesses that having once been sceptical about the halo becoming mandatory in F1, he has changed his mind completely and now would not race without one.

"When you go through what I went through on Sunday, it's not involvement that you have, it's a duty to help," he said.

"So I've already spoken with [FIA president] Jean Todt at the hospital. He told me, 'you remember when you say that it was a sad day for Formula 1 when we introduced the halo?'

"I said, 'yes, sure. I remember, and it's only stupid people that don't change their mind.' The halo is the best thing. I wouldn't race any car without a halo." 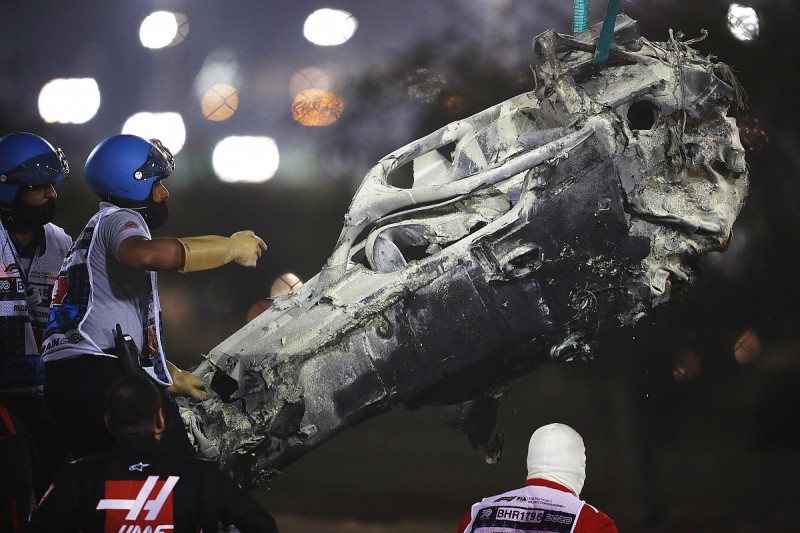 Grosjean had been evaluating a potential move to IndyCar for next year, but now admits that his risk appetite has changed after coming through his Bahrain experience.

Asked about what he felt he would now do after F1, Grosjean said: "Not yet. The first and only target at the minute is to try to get back to Abu Dhabi and understand how it works for me.

"Obviously we were talking about IndyCar at one point, but I'm having the thought now that to add the risk of ovals, where you can have big shunts and having my family far away and seeing on TV, it's hard. And I don't know if I could make it.

"But I've decided not to take any decision for now, until I maybe get either to race in Abu Dhabi or get some more time.

"Last week the priority was to sign a contract and find a way to go racing in 2021. The priority now is a bit different and, if I don't race in 2021, I'll be cycling, kitesurfing, spending time with my kids, enjoying life and having time off which I didn't have since I was 17."