In a Red Bull column, Horner explained that Verstappen had been pushing on his way to the grid in order to synchronise eighth gear when he misjudged the level of grip available at Turn 12.

After swift repairs from his mechanics, Verstappen would go on to finish second, to turn around what had been a "depressing" weekend for the team in which it had been "a little bit at sea" on Friday.

"I was watching the out lap on the monitor and saw Max run wide at turn six/seven," Horner said.

"He was pushing to find out where the grip was and trying to synchronise eighth gear on the run down to turn 12, which means you have to be flat-out to get that synchronisation.

"The circuit was more slippery than he thought, and the tyres were pretty cold. Nobody could quite believe their eyes when he went off into the barrier."

After deciding to send the car to the grid, Horner said his mechanics demonstrated "the absolute epitome of teamwork".

"The funny thing is, I wasn't stressed about it," he said.

"I felt that if anyone could do the repairs then our mechanics could. 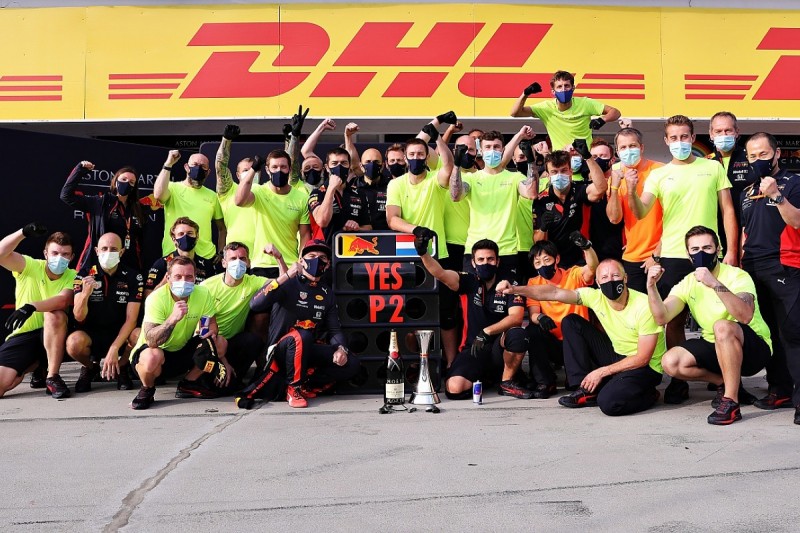 "You'd need to be a sensational piano player to be able to work your fingers within the space they had, such is the tight design of these cars.

"They were properly buzzed in the garage and then, of course, they had to calm themselves down because it is the same mechanics doing the pit stops.

"They smashed in a sub two second pit stop as well - the quickest during the race - for the third race in a row. It was a phenomenal team performance."

Horner conceded that prior to the race it had been a poor weekend for the team, which is struggling to find consistency with the new RB16 car.

It broke curfew on Friday night, but both Verstappen and Alex Albon "were struggling with the unpredictable characteristics" which left them down in seventh and 13th on the grid.

"If I'm honest it was a pretty depressing evening," Horner said of Saturday.

"It felt like one those weekends where nothing was going our way despite everyone working their arses off.

"One thing you can be sure of about our team is that we never give up and we all have a massive amount of fight in us."

Horner added that the RB16 "has the makings of a very good car" and that the team had not yet given up in its pursuit of the dominant Mercedes.

"We just have to make sure we extract the full performance and fix the handling issues," he said.

The F1 driver who didn’t want to be champion