Thanks to the impact of the COVID-19 pandemic, the 2021 Formula 1 regulations will remain largely the same from 2020 - with a few key changes over the off-season

Although an entirely new ruleset had been agreed upon for 2021, the financial problems levelled on F1 by the pandemic forced a delay to the sweeping technical changes, meaning 2021 will carry over much in the way of progress between seasons.

Here are the key changes to the technical regulations for the 2021 F1 season, and what we can expect to see.

Why were the original 2021 regulations delayed?

F1 had settled upon a new aerodynamic formula, complete with a reduced reliance on overbody aerodynamics - such as wings and bargeboards - and replaced them with a ground effect formula, not seen since 1982.

However, the severely reduced income for teams over 2020 meant that those changes had to be moved back to 2022.

Teams rely on income from attending races, from sponsorships and partnerships with other companies, and from prize money. With no racing at all throughout the first half of 2020, teams were operating at a considerable loss.

To ease those financial concerns and any hangover into the new year, the decision was made to carry over the majority of the key structural components into 2021, rather than demand that teams had to design an entirely new car within a difficult financial period. 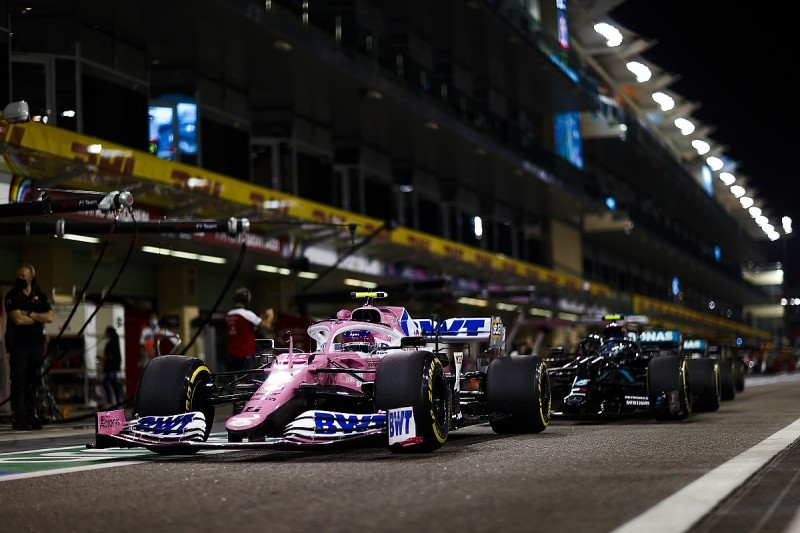 Which parts are carried over into 2021?

Predominantly, the chassis (denoted as the survival cell and roll structures), suspension components and crash structures should be carried over into 2021, essentially making this year's F1 grid a collection of B-spec cars.

Each team has two tokens that they are able to use to make changes, and the FIA technical regulations detail which parts require tokens to change and how many teams must exchange to develop that area.

For example, the survival cell is split into two parts, with each half requiring two tokens to develop. Teams may decide that either the front or the rear section of it needs further development.

There are situations where the tokens need not apply, and changes can be made to the front crash structure if those modifications only affect the nose fairings.

If teams spend both tokens in a certain area, then all other parts of the car that require tokens to develop must be carried forward into 2021.

Teams using customer 2019 parts, such as Racing Point or AlphaTauri, will be allowed to upgrade to a 2020 specification without expending any tokens. 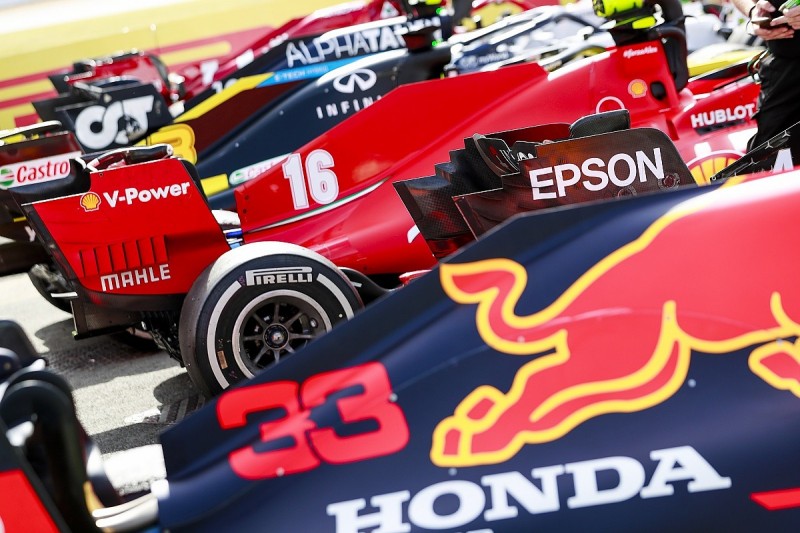 Which areas are free to develop?

The aerodynamics and power unit are the key areas that may be developed - although the power unit must be frozen in its current specification once it has been homologated.

This means that the usual aerodynamic changes throughout the season will remain in place, if the team's budget allows it to develop those areas.

There are also some required aerodynamic changes for 2021 to reduce the overall downforce output, which was to assist Pirelli as the Italian tyre manufacturer had to run essentially the same tyre specification for a third consecutive year.

Although Pirelli has made some structural changes to the tyres for this year to avoid a similar raft of blow-outs that they sustained during last year's British GP, reducing the aero loads of each car means that Pirelli can opt to run lower pressures.

Otherwise, the only counter towards the increased off-season development was to increase pressures further, bringing the Pirelli tyres into a range that they were not designed for. 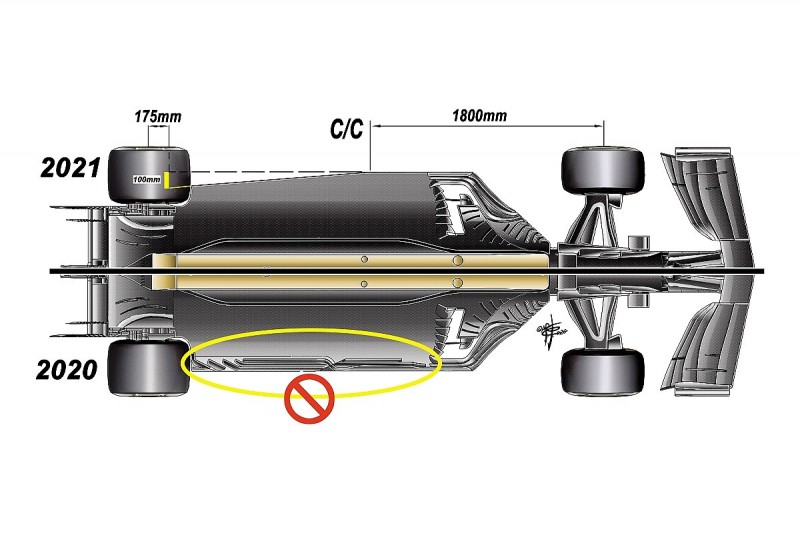 What are the new aerodynamic rules for 2021?

The rear corner of the floor, between the back of the survival cell and the rear axle, will be cut off to limit the overall downforce.

This also purges the floor of the multitude of slots and cuts that are used to allow airflow to drift outwards and create a seal to protect the diffuser.

Losing those pumps more turbulent air into the diffuser, which also loses 50mm from the internal fences that break up the diffuser and control the airflow.

As a result, the diffuser will be less effective and produce less downforce, reducing the overall load on the tyres.

The changes to the aero package are expected to yield a reduction in downforce of 10%, although it is expected that the brainpower of F1's collective engineering personnel will be able to reclaim this in other areas. 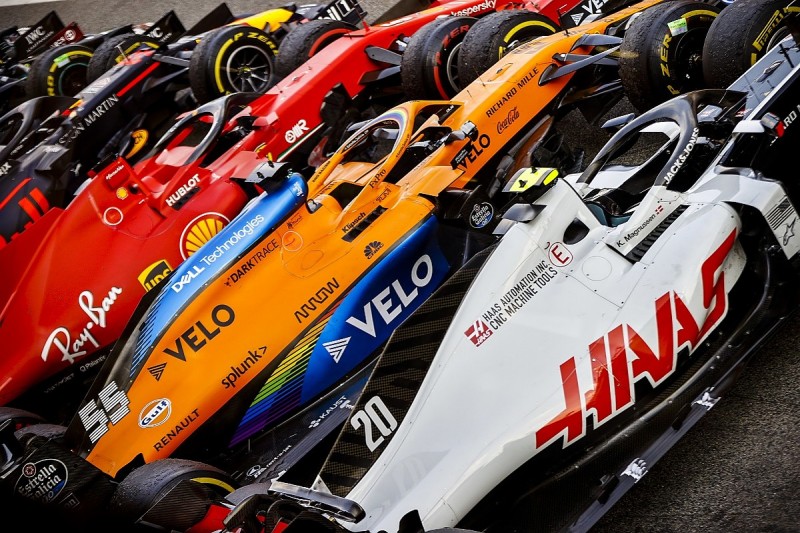 Which teams are expected to make changes?

Ferrari will introduce a new engine for 2021, and is expected to also make changes to the rear end of the car in order to accommodate this.

McLaren will also have to rework the rear end of its MCL35, as it switches to a Mercedes power unit for 2021.

It has also considered a switch to a lower-rake car, which will bring the diffuser closer to the ground and theoretically overcome some of the deficit produced by the reduction in size of diffuser elements.

Renault technical chief Pat Fry explained that the 2021 technical changes were bigger than many anticipated.

"The floor change, although it looks quite a small and insignificant change, how it actually changes the aerodynamics at the back of the car is quite dramatic really," said Fry.

Numerous teams have explored the impact of the 2021 floors in practice; Renault, Red Bull, Haas, McLaren and Ferrari have all trialled the reduced-size bodywork during the season.

Ferrari, Renault and Haas have all tried small curls on the trailing edge of the floor to bring airflow inwards, and the former had also investigated the effect of a floor featuring inwashing fins. 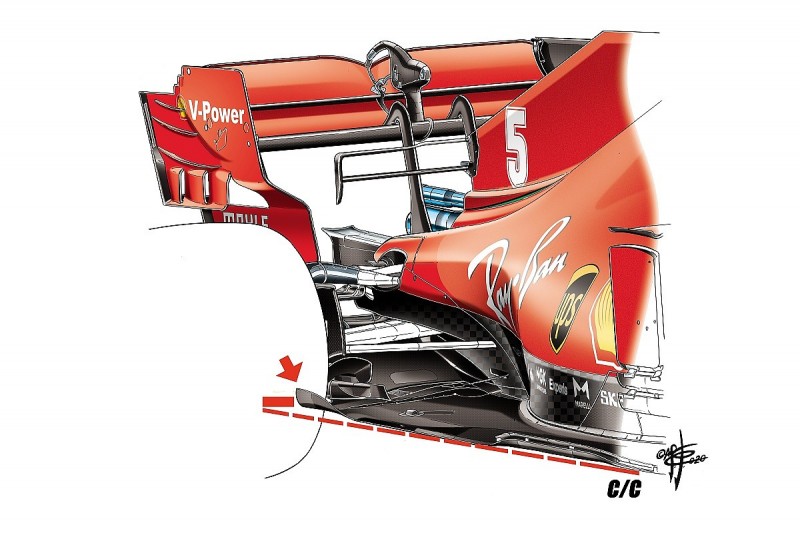