Ferrari: Leclerc's driveshaft would have failed with new gearbox

Ferrari wants answers in the next few days as to why it failed to spot the driveshaft problem that derailed Charles Leclerc's victory hopes in Formula 1's Monaco Grand Prix.

Leclerc had qualified on pole position for the Monte Carlo event, but had faced an anxious wait to find out if he could start from the top spot amid concerns that he could need a replacement gearbox after a qualifying crash.

Final pre-race inspections confirmed that the gearbox was all good, but Leclerc suffered heartbreak during an installation lap when a left rear driveshaft hub broke on his car.

With no time to replace the part, Leclerc was unable to start the race and had to watch the event from the garage.

Ferrari does not believe that the driveshaft failure was related to any issue with the gearbox, but it does not yet have any answers as to why the problem was not spotted before the car left the pits.

Team principal Mattia Binotto said analysis of both car data and the actual parts in Maranello this week should deliver the answer as to whether or not Ferrari could have taken action earlier.

"On our side we need to understand what happened really, and why it happened," said Binotto. "And more than that, if we could have detected it in parc ferme from Saturday afternoon and race morning.

"It's more important really to understand why we didn't detect a problem on the car. The problem was not there when he left the garage, so the problem started to appear in turn six. 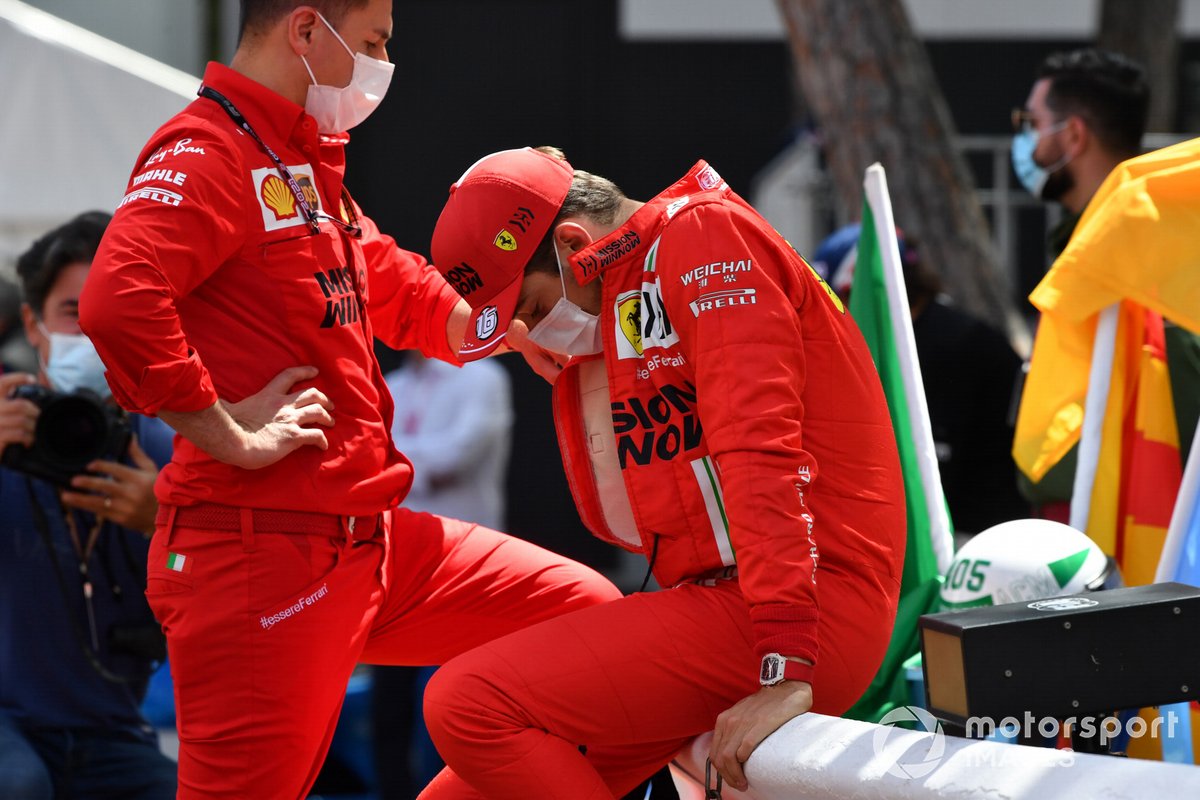 Binotto is adamant that the driveshaft failure was fully independent of the team's decision on the gearbox, and reckons it would have broken anyway even if Ferrari had fitted a replacement.

"It's not gearbox related," he said. "If we would have changed the gearbox, still those parts would still have been on the car because they were not damaged from the accident.

"The failure would still have happened, so it's not a matter of gambling with the gearbox at all."

F1's parc ferme rules allow teams to replace any parts that have been damaged during qualifying.

Ferrari's inspection of the car did not suspect any problems with the driveshaft components so it kept those parts on the car.

Binotto added: "There is a clear regulation saying you can only change parts which were damaged. So the parts we changed were really the ones damaged: the front wing, the front right suspension, and the rear right corner. They were clearly damaged, and we got permission to do it, so that's it."

But while the driveshaft failure was not linked to the gearbox, Binotto has not ruled out the failure being a consequence of Leclerc's qualifying crash.

"Eventually it could be related to the accident," he said. "It's something which we need to analyse and eventually find the final answer. But it was on completely the opposite side, the other corner. But again, maybe not related or maybe yes."