Vettel secured his third pole position of the 2017 F1 season by outpacing the Red Bulls of Max Verstappen and Daniel Ricciardo - which had dominated practice - by over three tenths of a second.

During his final run, Vettel brushed the wall at Turn 19, the right-hander coming out from under the grandstand, and admitted he felt a big vibration towards the end of the lap.

"I was lucky on the final lap," said Vettel.

"I kept going until I approached the last corner and had huge vibrations, but luckily there was only one corner left.

"I pushed as hard as I could. I felt these guys [Red Bull] would have something in their pockets, then I was very relieved when I crossed the line. I looked at screens and waited for the call." 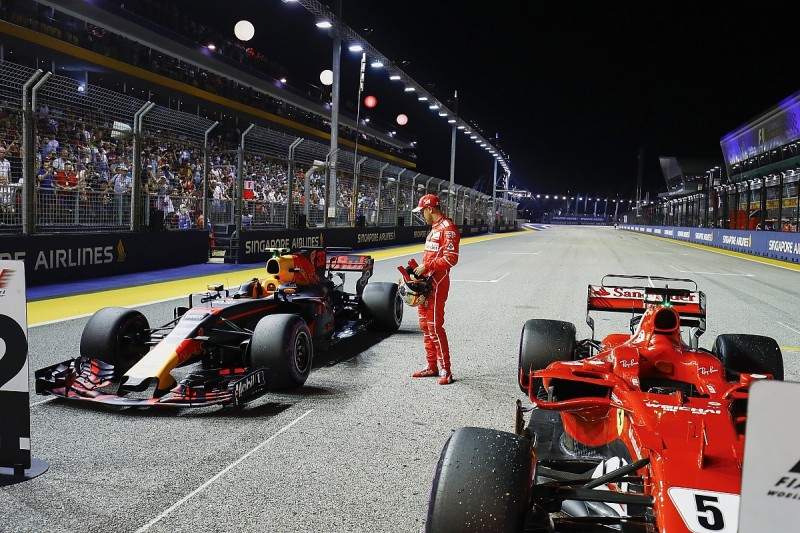 His pole came despite Ferrari having been off the pace in practice.

"The weekend so far has been a bit up and down, yesterday was difficult, this afternoon was difficult but tonight it came alive," Vettel added.

"It has been phenomenal," Vettel said. "The car wasn't behaving the way we wanted it to, but it has been pretty special, the amount of effort overnight, the support from Maranello.

"Charles has been in the simulator - it swaps between Antonio and Charles - they answered a lot of questions as we didn't have time remaining.

"The guys here, I don't know when they went to bed."

Although championship rival Lewis Hamilton qualified down in fifth, Vettel was staying cautious about the prospects for the race.

"We have a long race," he said. "There are a lot of things that can happen.

"Grid position here is crucial but still it is a long race.

"The fact that our car was good this evening is promising for tomorrow.

"I'm not bothered where others are. There are a lot of things we need to get right."