Fernando Alonso says that he has returned to McLaren to finish the job he started in 2007, having described that year as the lowest point of his Formula 1 career

The two-time world champion has rejoined the team he left in acrimonious circumstances seven years ago, and he says that the disappointment of that campaign is part of the reason behind him wanting to return for 2015.

"It was not the best feeling in 2007," Alonso said at the McLaren Technology Centre on Thursday.

"But in all the years since, inside I only had one thing remaining in Formula 1 to do.

"I was happy with everything I have done apart from 2007. I didn't achieve or deliver the best of myself.

"So now, some years later, you are more mature, you learn things, you understand things you didn't know at 25 years old.

"Now I arrive to finish the job that I started in 2007. This was the first and the main priority to come back."

McLaren boss Ron Dennis, who was at the centre of the storm with Alonso and Lewis Hamilton in 2007, said that the passing of time had relieved any tension from that year.

"In Formula 1 seven weeks is a lifetime - seven years is a huge amount of time," he said.

"I know the media will be looking for any kind of fracture in any part of the team's relationship, and especially Fernando and I.

"But I can tell you you'll be wasting your time. It isn't an issue.

"You always have challenges between drivers - I had them with Alain Prost and Ayrton Senna several times - but this one [2007] got away from us.

"I look back on my contribution to that with exactly the same emotion that Fernando expressed.

"You regret the mistakes you make in your life and sometimes you can't change what's happened. 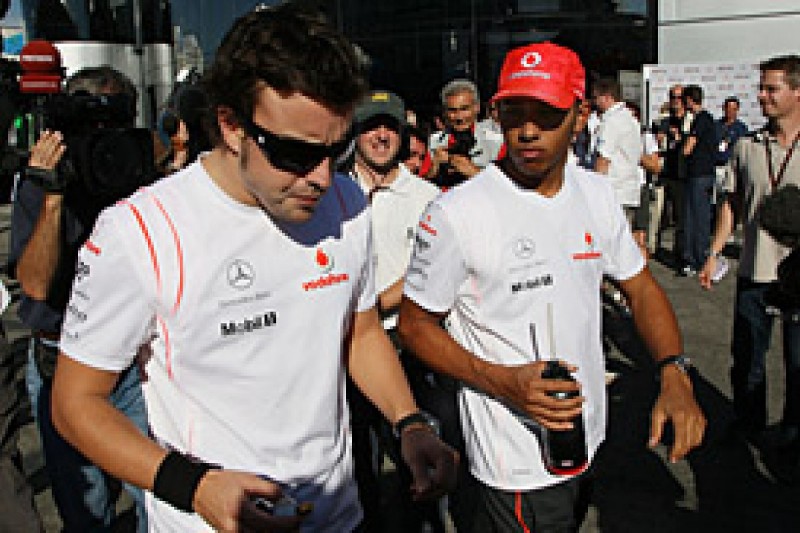 "So could I have engineered a way out of it? I probably could have dealt with it better."

Dennis added that he believes Hamilton was a key player in the problems at McLaren escalating in 2007, rather than Alonso being solely to blame.

"To go back to that period, you look at this young guy, understandably perceived by many people as the chosen one," he said.

"But [he was] also someone who had immaturity, and really, who struck the first blow?

"I would say Lewis had his role to play in starting this process which escalated."

Alonso added: "As long as you are honest with yourself and you learn from the things you did, it's time to think of the future.

"This is not any more 2007 McLaren-Mercedes, this is McLaren-Honda which is a completely different thing in my opinion.

"I am sitting here ready for this challenge because I see no problems at all and I see this as a winning project."