Bottas set the initial place at an unusually early point in FP3, as he quickly headed out to further explore the Mugello track on the soft tyres.

His 1m17.437s came in well before 10 minutes had been completed, which was followed by a lengthy lull in action.

After 10 more minutes had passed, the pack emerged, with Hamilton finally appearing for the first time - immediately on the softs.

He used them to take the top spot from his team-mate with a 1m17.415s, trailing Bottas only in the opening sector.

Just before the halfway point, Bottas hit back using the same set of softs he had run at the beginning of the session with a 1m17.239s to retake first place at that stage, with Verstappen following a few corners behind for his first run on the mediums.

Verstappen's first lap put him 0.059s adrift, with the fastest final sector, but after a cooldown lap he pushed again and claimed P1 with a 1m17.116s - adding the quickest first sector at that point.

Heading into the final quarter of the session, Bottas reappeared on new softs and shot back to first place with a 1m16.530s - despite running slightly wide mid-way through the Bucine final corner. 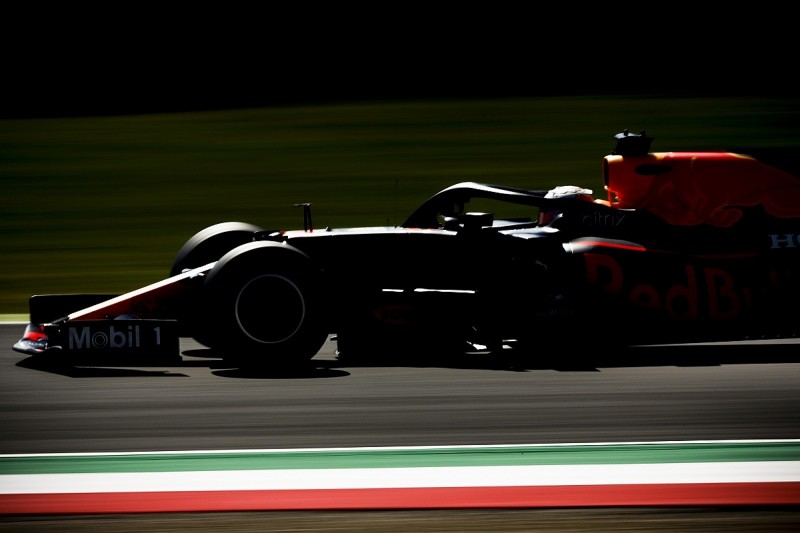 Hamilton stole back the fastest time in sector one on his next run, but wound up 0.083s behind Bottas, to push Verstappen's medium tyre lap to third.

Verstappen finally fitted the softs in the final minutes and used the red-walled rubber to blast his way to a personal best time - with another new fastest time in the final sector - to slot in between the Mercedes, just 0.017s behind Bottas.

Lance Stroll put his Racing Point fourth, while Monza winner Pierre Gasly, who had a trip through the gravel after catching a snap of oversteer through the Scarperia/Palagio chicane in the third sector, was fifth for AlphaTauri.

Sergio Perez took sixth ahead of Ferrari's Charles Leclerc, while Alex Albon moved from 18th to eighth with the final flying lap of the session.

Albon ran very wide through the exit of the Correntaio hairpin, kicking up dust and grass on the exit, but still managed to improve.

Daniil Kvyat was ninth in the second AlphaTauri, while Romain Grosjean recovered from missing much of FP2 to an electrical issue to round out the top 10.

Both Renaults and both McLarens finished outside the first 10 positions, with Esteban Ocon and Daniel Ricciardo 11th and 17th, while Carlos Sainz Jr and Lando Norris were P12 and P19 respectively.

Sebastian Vettel finished ahead of Norris in the second Ferrari in 18th, while George Russell brought up the rear of the field with no time set as he suffered a suspected brake-by-wire failure - reporting his pedal went "completely to the floor" - on his installation lap, which was the only tour he managed in the session as a result of the issue.