Kimi Raikkonen and Ferrari ended Formula 1 pre-season testing at Barcelona fastest, despite causing a red flag during the final afternoon

Following the pattern of the first three days of the second test, the morning's best times were not beaten in the afternoon session, as the majority of F1 teams turned their focus towards longer runs.

That meant Raikkonen's morning effort of 1m18.634s, set on super-soft tyres, stood as the best time of the day, as well as overall after eight days of winter testing.

It wasn't all smooth sailing for Ferrari however, as Raikkonen caused the first red flag of the afternoon - and the fifth of the day - when he stopped pointing the wrong way on the disused section of track by the chicane complex at the end of the lap.

The SF70H had suffered a problem earlier in the lap, with Raikkonen using the old circuit layout as he cruised back to the pits, only to lock the rears and spin to a halt.

The Finn returned to the track for the final 15 minutes, and completed 111 laps in total.

Max Verstappen stayed second for Red Bull, 0.804 seconds behind Raikkonen on the same tyre, followed by Carlos Sainz Jr, who put Toro Rosso third with a late-morning run on ultra-softs.

The Spaniard was responsible for the sixth and final red flag of the day when the STR12 eased to a stop along the start/finish straight at the start of the last hour.

Valtteri Bottas stayed fourth, a mere 0.005s ahead of Mercedes team-mate Lewis Hamilton, who took over the W08 for the afternoon and posted a best of 1m19.850s using ultra-softs. 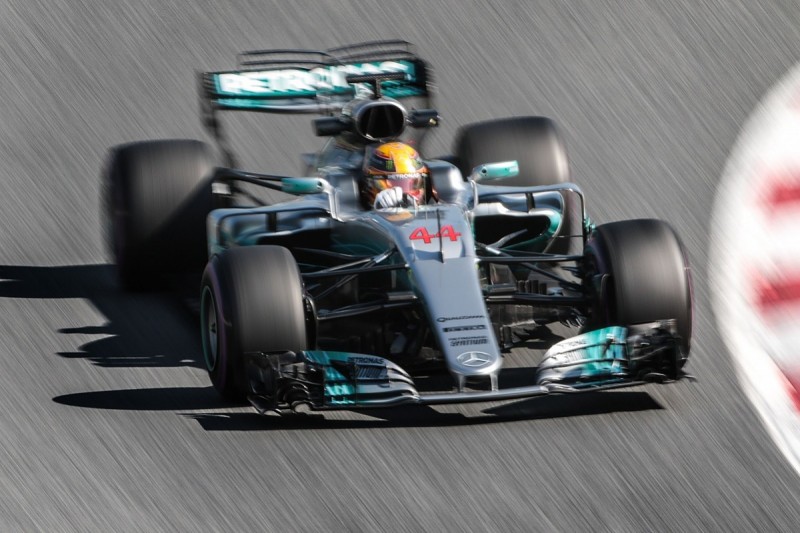 Morning times were enough to put Nico Hulkenberg and Force India's Sergio Perez sixth and seventh, while Hulkenberg's Renault team-mate Jolyon Palmer slotted into eighth on ultra-softs with a time set in the afternoon

Lance Stroll was ninth for Williams on his final test day before his grand prix debut in Melbourne, topping the lap count with a total of 132 laps.

Romain Grosjean completed the top 10 for Haas, enjoying a smoother afternoon after causing two red flags in the morning, just ahead of McLaren's Fernando Alonso.

After a morning disrupted by a pair of electrical problems that also caused red flags, Alonso improved on his best time from the morning with a 1m21.389s on ultra-softs, although he was baulked by Stroll on that particular lap.

The two-time champion ended up with a total of 43 laps to his name, with McLaren again completing fewest laps of any outfit.

Sauber team-mates Marcus Ericsson and Pascal Wehrlein completed the times, the latter taking over the C36 for the afternoon and ending up just under five seconds off the pace on softs.