Formula 1's bigger teams admit that there is no easy way to cure the sport's financial woes, as smaller outfits spoke out on Friday about the need for action

The collapse of the Caterham and Marussia teams has highlighted how big F1's cost problems are, and has prompted fresh calls for action to be taken before other outfits fall off the grid.

But despite an acceptance that the costs issue needs addressing, it became clear during a lengthy press conference on Friday that teams remain at odds over what needs to happen.

Smaller teams are pushing for a fairer distribution of revenues, cost cuts and a budget cap, while their larger rivals believe that such changes will not solve the problems, and could actually cause further trouble like mass redundancies.

Mercedes motorsport boss Toto Wolff said: "The teams in F1 today should stay in F1 and they should all look at the situation and come up with a short-term plan, how to have a healthy grid, and a long-term plan.

"We are talking about money distribution which is an issue for the commercial rights holder, and I don't have a solution.

"I can come up with many ideas which can be short term solutions but it comes back to the principle that whatever you give to the teams they are going to spend."

McLaren racing director Eric Boullier added: "There is a wake-up call maybe for everybody to make sure we can act altogether and we will try."

Lotus owner Gerard Lopez believes that there were aspects of F1 that he found unacceptable, as he singled out the bonuses that Ferrari gets for competing.

"Now is the time to say things as they are," said Lopez. "Number one: the distribution model of revenues is completely wrong.

"When you've got teams showing up to the championship that get more money just for showing up than teams spending a whole season then something is entirely wrong with the whole system, and so that cannot be allowed to happen."

Lopez also singled out the dramatic jump in engine costs this year - which had forced budgets higher - as a key factor in hurting smaller teams.

The anger of the smaller teams at the situation is clear, especially with Force India's deputy team principal Bob Fernley hinting at hidden agendas from the big teams.

And although suggestions of a potential United States Grand Prix boycott by Sauber, Lotus and Force India have been played down, those three teams are likely to do all they can to try to force change.

Speaking about if there was a serious threat to not race, Lopez said: "I've just found out about the story now, so my answer is no.

"I've had a meeting with them about the cash distribution and so on, and that's it.

"I'm not aware of this. I don't even know where this comes from, and that's the whole point."

But he did admit that things had to change quickly, and action had to be forthcoming. 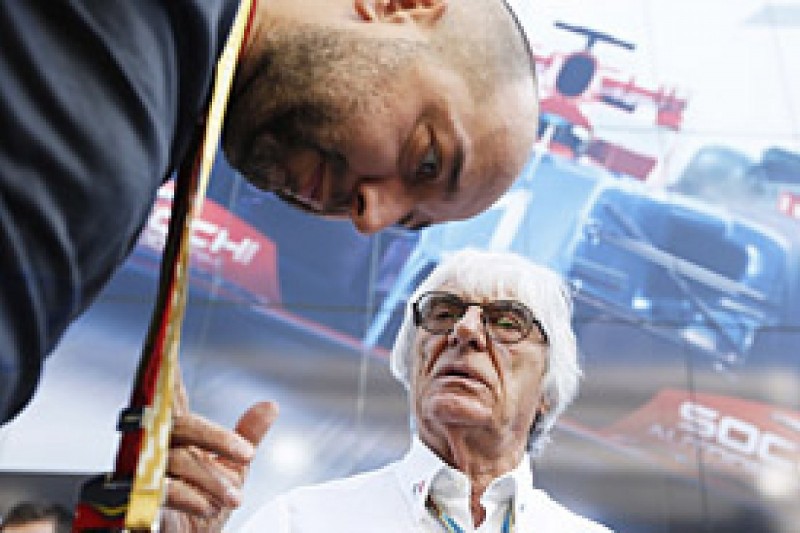 "I don't think there is an agenda - I sure hope there is none - but things have to drastically change in the next couple of weeks," he said.

"Not because teams are going to be driven away, but because if you don't take a situation like this one seriously, to change something, then you are never going to do it."

F1 supremo Bernie Ecclestone spoke briefly on Friday about the costs crisis, but reckoned a bigger issue for him was not the potential demise of other teams but changing the engine rules.

"We need to get rid of these engine regulations because they don't anything for anybody - they are not F1," he told Sky, while not ruling out the grid shrinking to 14 cars. "We are going to try for sure."