Despite a few drops of rain falling early on, the predicted rain for the one-hour FP3 session stayed away, with Bottas returning Mercedes to the top spot after yesterday's wet second practice, while Red Bull again struggled.

But, as the traffic levels built up as the teams looked to make up for their lost running on Friday, Max Verstappen was able to take first with a 1m17.033s on the medium tyres.

Just after the Mercedes cars, with Hamilton quicker at this stage, lowered P1 to a 1m16.472s on the softs, Verstappen spun at Turn 12 - the 90-degree right at the start of the final sector.

He was able to quickly leave the scene, which was where the two works Mercedes were also smoking heavily early-on as the accelerated away from the corner.

Bottas and Hamilton continued to improve during the busy early running, with the latter losing a slow cool-down lap time for running wide at the exit of Turn 12 - on of several areas where the FIA is hotly policing track limits.

The teams switched to final qualifying simulation runs heading into the final quarter of the session, with the Ferrari drivers leading the pack out after a brief lull in action.

Although Vettel ran ahead on the track, Leclerc moved into first with a 1m15.781s - setting the best time in the final sector that stood to the end of the session. 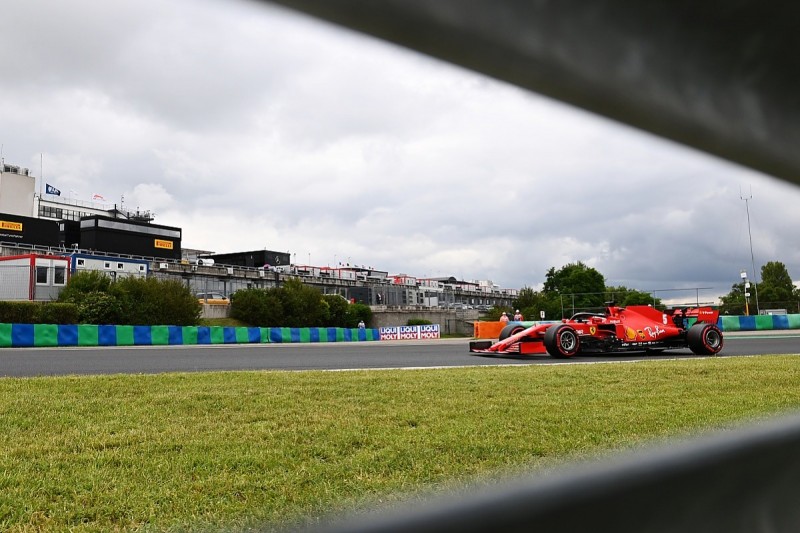 When the Mercedes cars reappeared with 15 minutes to go, Bottas retook first with a 1m15.437s, while Hamilton abandoned his first flying lap on fresh rubber after a slow middle sector.

Hamilton, with the fastest time in the middle sector, was able to improve his session's best a short time later but he wound up 0.042s slower than his team-mate.

Sergio Perez put his RP20 third with his best effort in the closing stages, demoting Leclerc to fourth and taking the best first sector time of the session.

Lance Stroll was fifth in the second Racing Point, ahead of Verstappen, who looked to be rapid in the opening sector - twice setting the fastest time there before Perez took that mantle later on - before fading as the lap went on.

The Red Bull driver finished the session 0.647s slower than Bottas and at one stage in the final laps complained he could not synch eighth gear satisfactorily.

Lando Norris was seventh for McLaren ahead of Vettel and Pierre Gasly, while Daniel Ricciardo rounded out the top 10.

Ricciardo's 1m16.508s was a late improvement after he had lost his previous best time on the softs for running wide at Turn 4 - the rapid left kink at the start of the second sector.

Carlos Sainz Jr finished 11th in the second McLaren, with Albon ending up in P12 after complaining about vibrations on his car.

Raikkonen and Nicholas Latifi brought up the rear of the field - the pair having off-track excursions at opposite ends of the session.

The Alfa Romeo driver went wide at Turn 1 early after running over the cement dust laid down to cover oil dropped in a fiery engine failure during the day's earlier Formula 3 race, while Latifi also spun at Turn 3.