Formula 1 cars should lose around one third less downforce when following each other next year, according to the latest predictions from the FIA

In the wake of difficulties cars have had overtaking since revised aerodynamic rules were introduced last year, teams and the governing body agreed a raft of aerodynamic changes for 2019 to improve the situation.

A series of tweaks, including modifications to front and rear wings, are aimed at helping cars follow each other more closely.

Although how big a benefit the changes will make will be unclear until cars actually hit the track, the FIA's single-seater head Nikolas Tombazis said the change will be especially noticeable in medium speed corners.

Speaking in the latest issue of the FIA's Auto magazine, Tombazis said: "We consider the critical position to be around 15 to 20 metres between the cars.

"That's the distance we'd expect to see between cars running half a second apart approaching a medium-speed corner.

"With the current generation, the following car loses about 30% of its downforce in this scenario. We hope to reduce that by 10%." 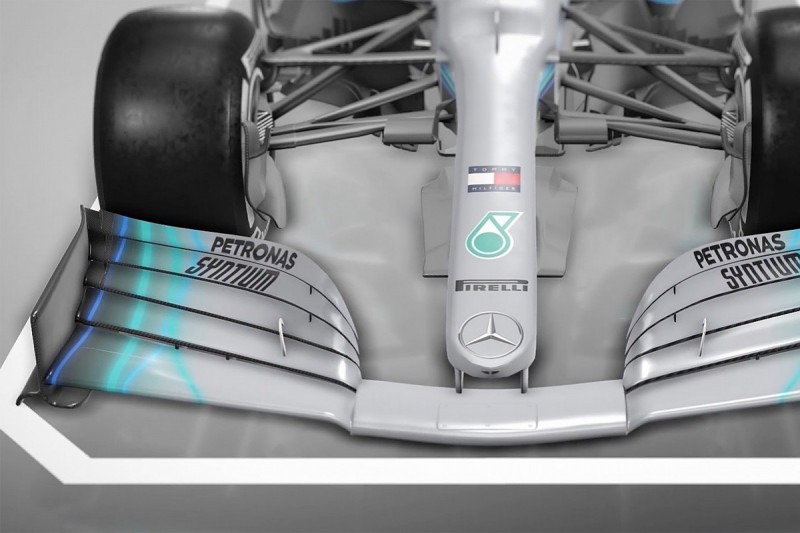 Although some teams are sceptical that the changes will make much difference, Tombazis said overtaking would have been even worse for the next two years had nothing been done before a major technical overhaul planned for 2021.

"What I would say is that there is a general trend for teams to develop more downforce, which would exacerbate the problem," added Tombazis.

"We now believe that 2019 will be better than '18, but no one is expecting F1 cars to be fighting like touring cars."

The FIA's intervention has been backed by Williams chief technical officer Paddy Lowe, who said he had long-held concerns about the negative impact of the aero rules introduced for 2017.

"I was not a fan of the 2017 regulations which, I thought, were a backwards step for overtaking," said Lowe.

"I feel that not doing anything now would mean we'd have several years of a worsening situation, as the teams develop more downforce.

"The FIA and FOM were correct to act at this point and do something different for 2019 and '20.

"I've got quite a high confidence in the technical aspects of what's been done, that it will take us back in the right direction."

Why Raikkonen refuses to quit F1