Keeping a close eye on what rival teams are up to is part of the game in Formula 1.

It’s why teams spend money on spy photographers to capture close-ups of other cars, and why there are rules limiting what techniques and technology – like 3D camera scans – are actually allowed.

While teams try their best to keep their own designs secret – which is why you often see mechanics blocking off sections of the cars from rival teams on the grid or in the garages – there is one part of the race weekend where things are more open.

In parc ferme after the race, the cars are held in an open space prior to post-event inspections, and there is little teams can do to keep prying eyes away.

For although there is a gentleman’s agreement that teams do not take close up spy shots of cars there, there is nothing stopping drivers walking right up to the cars to take a peek themselves.

Several times Sebastian Vettel has been witnessed checking out the fine details of a Mercedes, even pushing down on car parts on occasions, and Lewis Hamilton also is known to have a good eye for spotting things. 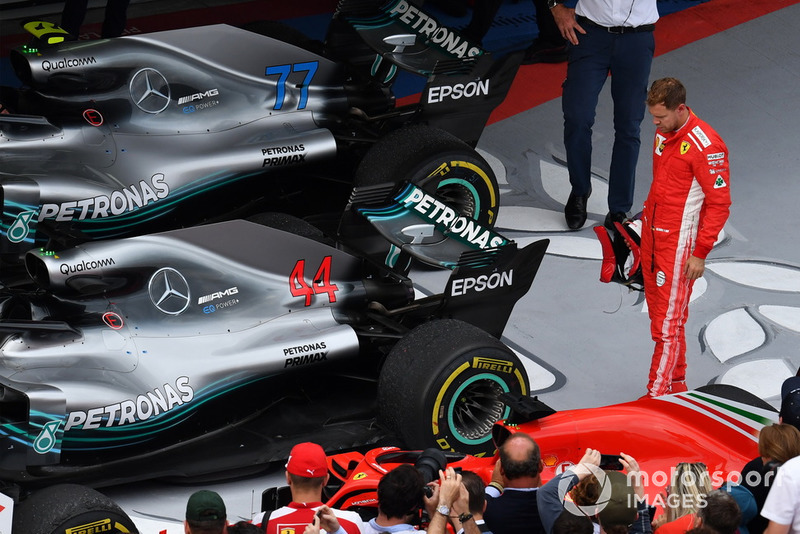 While you would think that any information a driver gives back to his team from this moment is of minimal use, actually there can sometimes be priceless details that can push a team to work on something better for their own car.

One of Mercedes’ former engineers has now lifted the lid on what type of feedback a driver like Hamilton can give – and offered a fascinating example that highlights the world champion’s attention to the smallest of details.

Philipp Brändle worked on Hamilton's car until the end of 2019 and, during a recent appearance on ServusTV over the Bahrain Grand Prix weekend, he was full of praise for the insight that Hamilton often gave the team.

"Lewis is a super spy", said Brändle: "He looks at everything very closely.

“For example, there was once a moment prior to the podium room where the drivers were having a drink. He noticed that another racing suit had fewer cables. The point was that you can save weight, because really every detail counts in Formula 1.

"So he gave us the feedback that the other team had a shorter wiring harness, and a smaller plug.

“And really everything, how you can somehow save just one gram, is important. He looks at details like that, and that's what we implemented.”

Former F1 driver Nico Hulkenberg said that drivers felt a responsibility to keep an eye on anything of interest they spotted on rival cars in those parc ferme moments.

"You gather information," he told ServusTV. "You look at how it's solved on the car and then you pass that on to your engineers. And of course you hope that they can do something with it and make your car faster."