Mercedes driver Valtteri Bottas set a 1m27.629s to head the times for the vast majority of the session, although light rain limited running in the final half an hour and distorted the order.

Lewis Hamilton completed an early Mercedes one-two, but was displaced by the Red Bulls of Gasly and Max Verstappen late on.

Gasly then improved again on his very last run to set a 1m27.173s and go almost half a second clear at the front.

The start of the session featured a series of spins as drivers got to grips with the newly-resurfaced Silverstone circuit, beginning with Romain Grosjean crashing his Haas while exiting the pitlane.

Grosjean lost the rear of his car where the pitlane exit jinks right and he broke his front wing against the barrier before briefly driving the wrong way down the pits to find space to turn around. 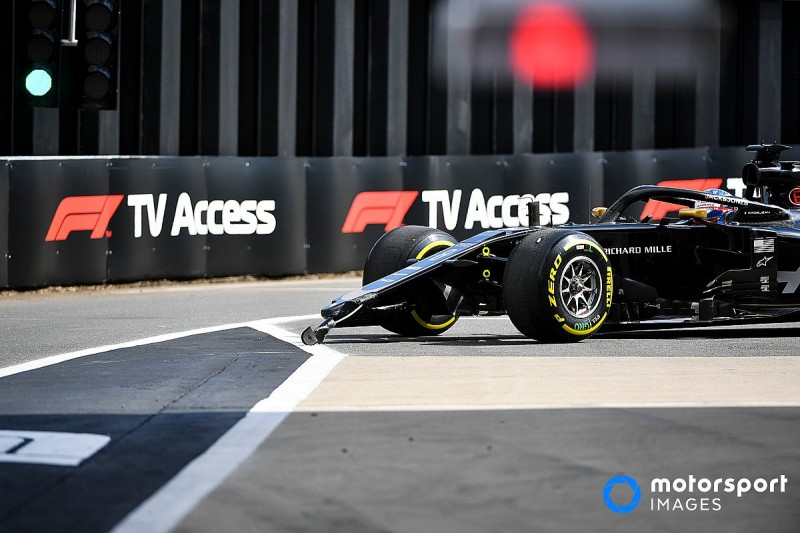 After that, British GP rookies George Russell and Lando Norris had spins of their own.

Williams driver Russell ended up on the grass after catching a wobble through the Brooklands left-hander and being spat off in the opposite direction.

Norris was left facing the wrong way on the run-off onto the start/finish straight in his McLaren, after losing the rear exiting the final corner.

The session was then halted as Raikkonen's Alfa Romeo was recovered after grinding to a halt on the entry to Luffield.

Replays showed a puff of smoke emerging from the rear of Raikkonen's Alfa as he rounded Brooklands slowly, with the car appearing to have stuttered and then cut out down the Wellington Straight.

Once the session resumed, Hamilton, Bottas and Alex Albon had moments of varying severity through Brooklands, and at the same corner Grosjean compounded a difficult session by having another spin.

Light rain began to fall approaching the final half hour, sending most cars to the pitlane - although McLaren's Carlos Sainz Jr remained on track.

The drizzle never turned into heavy rain and stopped early enough for some drivers to squeeze in improvements in the dying minutes of the session.

Nobody lapped quickly enough to depose Bottas initially, but Gasly got close on a 1m27.715s that launched him to second.

As the chequered flag fell, Gasly completed another flying lap on soft tyres that put him well ahead.

Verstappen ended up third-fastest, 0.8s slower than his under-pressure team-mate, with Hamilton fourth.

A late improvement from Charles Leclerc was only good enough for fifth-fastest, a second off the pace and just ahead of team-mate Sebastian Vettel.

Nico Hulkenberg and Daniel Ricciardo gave Renault a shot in the arm after the team's poor Austrian GP by ending FP1 seventh and eighth.

Albon and Sainz completed the top 10.