Vettel was rushing back to the pits before setting a lap time during the second qualifying segment in changeable conditions at Interlagos, as Ferrari sent him out on supersoft tyres but wanted him to come in to switch to softs.

Upon entering the pitlane Vettel was called into the weighbridge but the scales were coned off.

Vettel hit the cone immediately blocking the entry and gesticulated at officials to clear a path.

After keeping the car running, he edged forward while an official was standing directly in front of the car.

FIA technical delegate Jo Bauer said Vettel "refused to turn off the engine" and the car was pushed onto the scales but he left the engine running, which Bauer said "makes it difficult to get a stable result". 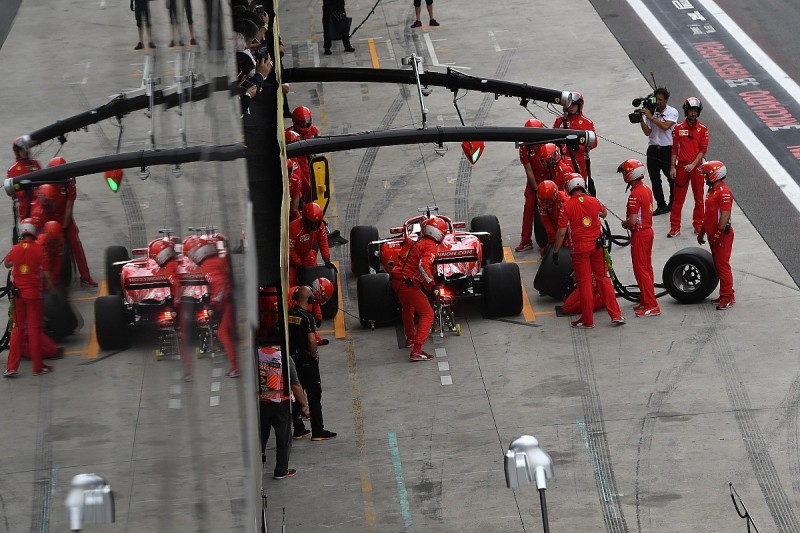 Vettel continued to gesticulate and applauded as his path remained blocked by another official.

Once the weighing was complete, Vettel drove off the scales under the car's own power - which Bauer said "destroyed" them.

"As the driver was not following the instructions and further compromised the continuation of the weighing procedure, I am referring this matter to the stewards for their consideration," Bauer stated.

Vettel has been summoned to the stewards for allegedly breaching Article 29.1.a.i, which tells drivers to stop their engines when being weighed "and/or" Article 12.1.1.i of the FIA's International Sporting Code, which refers to the "failure to follow the instructions of the relevant officials for the safe and orderly conduct of the event".

Vettel, who was able to set a time and progress to Q3 and qualify second after the incident, was knocked out of title contention at the previous grand prix in Mexico.

When asked about the incident following qualifying, Vettel said: "I think it is better if I don't say anything!

"They shouldn't call us because when the conditions are changing like that, I think it is unfair if somebody gets called in. I wanted them to hurry up."

Ferrari is still trying to prevent Mercedes from clinching the constructors' championship.