Hamilton impressively broke through the 1m43s barrier for the first time in Q2 at Spa, and repeated the feat on his first run in Q3, leading Ferrari's Kimi Raikkonen and Mercedes team-mate Valtteri Bottas by more than three tenths of a second.

Vettel's Ferrari languished in fourth after the first runs in Q3, but the world championship leader pulled things together on his second run, taking a tow from team-mate Raikkonen in the final sector to beat Bottas to the front row.

Vettel's 1m42.795s lap made him the only driver other than Hamilton to lap below 1m43s.

Bottas improved to a 1m43.094s best on his own final run, but struggled in the middle sector compared to Hamilton and ended up relegated to the second row.

Raikkonen held a provisional front row spot after the first runs in Q3, despite suffering unexplained vibrations from the rear of his Ferrari throughout qualifying, but "fucked it up" on his final Q3 run so aborted the lap and dropped to fourth. 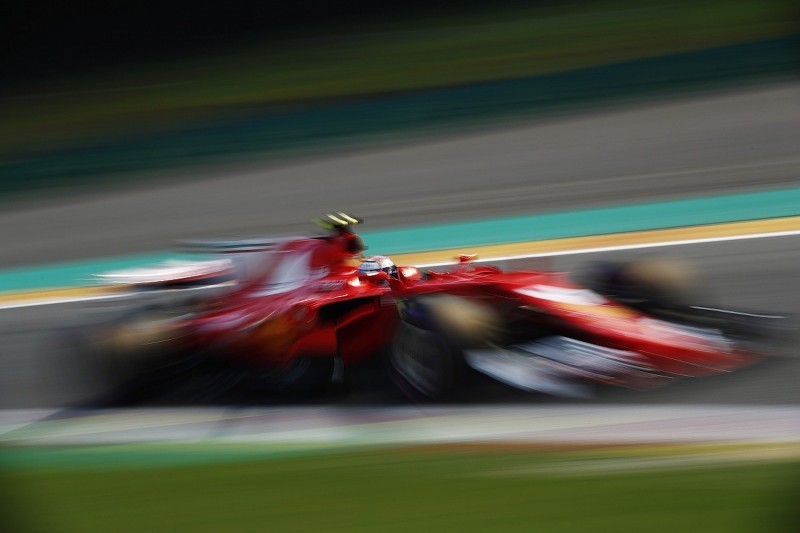 Max Verstappen was best of the Red Bulls in fifth, almost half a second clear of team-mate Daniel Ricciardo, while Nico Hulkenberg's Renault comfortably beat the Force Indias of Sergio Perez - who complained of a loss of grip in Q3 - and Esteban Ocon to seventh.

The second Renault of Jolyon Palmer looked set to qualify best of the rest behind the top three teams after setting the seventh quickest time in Q2, but he broke down at the exit of Stavelot on his out-lap in Q3, after losing gearbox oil pressure, so wound up 10th.

Fernando Alonso missed out on the final Q3 spot by 0.084s, despite the efforts of team-mate Stoffel Vandoorne to give Alonso a tow along the Kemmel Straight on Alonso's final flying lap.

Alonso then aborted the attempt, complaining of "no power" from his Honda engine at the exit of Pouhon over team radio.

Romain Grosjean found more than three tenths on his second Q2 run, but that was only good enough for 12th, ahead of Haas team-mate Kevin Magnussen - who went slower on his second attempt - and the Toro Rosso of Carlos Sainz Jr.

Grosjean felt he lost downforce behind Vandoorne's pitting McLaren in the final sector, without which he felt he might have made the top 10.

Vandoorne was 15th, but didn't set a time in Q2 and will drop to the back of the grid in any case thanks to a 65-place penalty for two illegal engine changes earlier in the weekend.

Williams's disastrous Spa weekend continued with both cars dropping out in Q1. Felipe Massa fell less than a tenth short of making the cut after a late improvement, knocked out by a better one from Sainz's Toro Rosso.

Massa ended up 16th quickest, but will drop back thanks to a five-place grid penalty for ignoring double waved yellow flags in final practice.

Daniil Kvyat was 17th in the second Toro Rosso, almost seven tenths adrift of Sainz, complaining he had "no reference" after breaking down with an engine problem in the morning session. Kvyat will take a 20-place grid penalty for requiring an engine, turbo and MGU-H change before qualifying.

Massa's Williams team-mate Lance Stroll was 18th quickest, but didn't venture out for a second run in Q1 due to a rear wing problem.

Marcus Ericsson won the private battle of the Saubers to avoid being slowest of all in qualifying, beating team-mate Pascal Wehrlein to the 19th quickest time by 0.465s. Both will take grid penalties for gearbox changes.

Fernando Alonso: McLaren easily fastest at Spa if it had more power