The German led the early stages in Bahrain but he was focused on a two-stopper when he moved to the soft compound at the first round of tyre changes.

Behind him, Mercedes chose to put Valtteri Bottas on to the medium compound with the aim of going for a one-stop.

With Vettel not opening out enough of an advantage early in the stint, he thought the race was lost, before his team elected to gamble on getting to the end without another stop.

In the end, he held off a late charge from Bottas to win by just 0.7 seconds.

"I came on the radio with 10 laps to go and said I had everything under control - and that was a lie," said Vettel.

"There was nothing under control. When they told me the pace of Valtteri at that time, I said no way I can do that.

"I did the maths in the car and thought he was going to catch me.

"I tried to keep it as clean as possible. Both Mercedes at the end of the stint were very strong, especially the first one, and by going onto the prime [medium] they saw what we did [as Ferrari pitted first]. 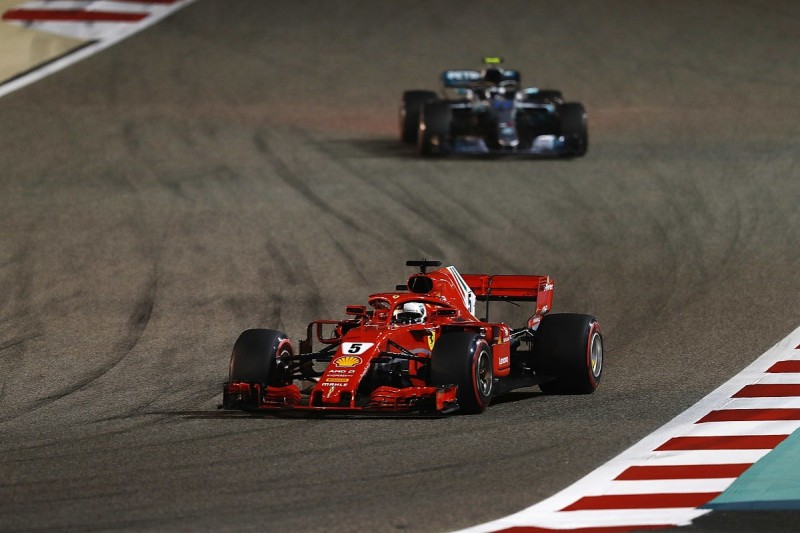 "Going onto the medium tyre I thought that was checkmate as we had to come in again.

"That was the original plan but we diverted again and tried to make them last and nurse them as much as I could. And it worked but only just.

"There wasn't much - Valtteri had a bit of a sniff but fortunately he ran out of laps so I am really happy."

Although Raikkonen stuck to a two-stop plan, before a botched pitstop put him out of the race, Vettel said that he had nothing to lose by trying to hold on to his tyres until the end.

"It put us under a lot of stress and pressure, but we had nothing to lose trying at that point to stay out and try to win or finish third," he said.

"I am really pleased, if you manage to get the win under these conditions it tastes even better."

Bottas had a brief look to pass Vettel under braking at Turn 1 on the final lap, but the Finn admitted he simply ran out of time.

"I knew because we were on the harder compound that there was a chance they would struggle in the end, and he was starting to struggle," said the Mercedes driver.

"I was trying to get every lap and every corner perfect to catch him, but it was not enough.

"Being second with such close margin in the end is extremely disappointing."