Hamilton did not improve on his first-practice benchmark significantly but a 1m23.931s was good enough to keep Mercedes ahead of Red Bull around Melbourne's Albert Park circuit.

The teams were more lethargic hitting the track in second practice, with Kevin Magnussen the first to venture out four minutes in, but flying laps kicked in almost immediately afterwards.

Verstappen fired the first real statement of intent after 10 minutes with a 1m25.063s on soft tyres, which Valtteri Bottas beat by three tenths of a second in his soft-shod Mercedes.

Hamilton usurped top spot soon after on a 1m24.569s and went quicker on his second run on a set of supersofts to get down to a 1m24.385s.

Verstappen then lapped only 0.016 seconds slower, still on softs, while it took a set of ultrasoft tyres for Kimi Raikkonen to vault Ferrari ahead of both on a 1m24.214s after 35 minutes of running.

Hamilton moved back in front within a matter of seconds as he switched to the softest-compound Pirellis and broke the 1m24s barrier with a 1m23.931s.

Bottas then briefly made it a Mercedes one-two, but Red Bull then gave Verstappen a set of ultrasofts and he stole into the 0.228s gap between the W09s.

Raikkonen was shuffled back to fourth, 0.283s off the pace and a couple of tenths clear of Sebastian Vettel.

Daniel Ricciardo was poised to emphasise Red Bull's position as Mercedes' closest challenger until a red flag halfway through the session ruined a hot lap.

Ricciardo was just 0.110s slower than Verstappen after the first two sectors before loose wire on the start-finish straight triggered a brief stoppage.

The session resumed swiftly but by this point the frontrunners had completed their qualifying simulations, which meant attention turned to long runs and there were no more changes at the top. 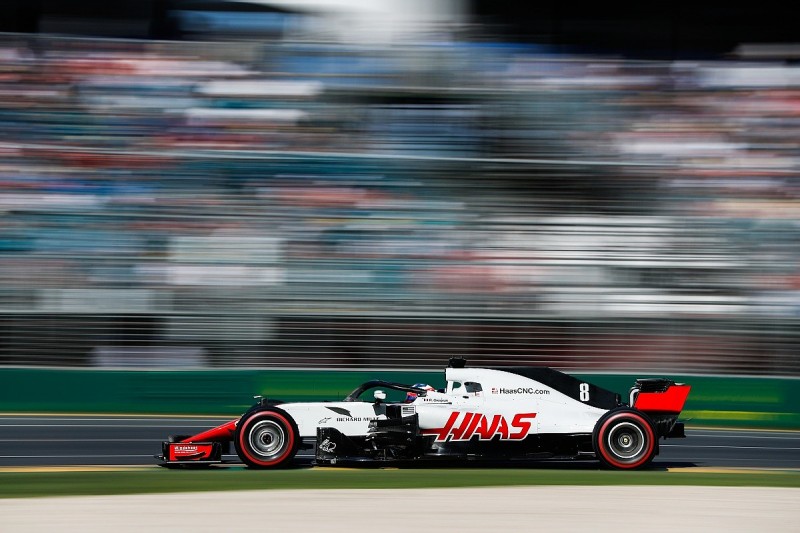 Haas was one of the understated stars of pre-season testing and Grosjean's 1m24.648s, just 0.717s slower than Hamilton, put the American team comfortably clear of its midfield rivals.

McLaren was next in the best-of-the-rest scrap, with Fernando Alonso eighth-fastest ahead of the second Haas of Kevin Magnussen and second McLaren of Stoffel Vandoorne.

Haas's half-second advantage over the midfield was at odds with an otherwise ultra-close fight contested by McLaren, Renault, Force India, Williams and Toro Rosso.

Less than a second covered from Alonso in eighth to Sergey Sirotkin in 18th, while Sauber ended the day adrift at the foot of the times.

Williams's Lance Stroll, who had been 14th fastest, had to pull over on-track after the end of session practice starts with concerns about his car overheating.