After days of speculation over potential innovations, Mercedes' definitive 2016 Formula 1 nose finally made its debut at the Barcelona test on Thursday morning

It follows the current trend of an S-duct fitted internally and also exhibits many unique features, but perhaps falls short of the radical expectations around its design.

Since the first changes to the nose regulations in 2011, teams have sought to clean up the airflow over and under increasingly complex and stepped nose shapes.

Following 2015's change to the nose tip, most teams have also chosen to run a short nose to improve airflow around the car. As a result, this year's cars are nearly all fitted with noses that are short and have an S-duct inside them.

This duct picks up airflow from under the nose and feeds it in a 'S'-shaped channel to exit back over the top of the car.

The process cleans up the airflow over the transition between the nose and chassis. It's not a huge aero gain, but was described as "well worth it" by one team's technical director.

In length the Mercedes nose is similar to the launch specification - as short as allowed by the regulations - but the shape is more rounded at the tip and straighter.

Also like last year's nose the actual structure is only the upper part of the shape, then the lower half is a bonded-on panel. This allows the shape to be both adaptable and hollow.

The lower panel forms the inlet and channel for the S-duct. The inlet is a 'U'-shape near the nose's tip, rather than further back as seen on rivals' ducts. From there the air flows back out over the top of the chassis from a slot formed in the nose cover panel.

Overall this makes the shape of the 'S' in side profile far longer than most teams' versions, which tend to contort the 'S'-shaped duct into just 10-20cm. So losses inside the duct should be less, resulting in a better blown effect over the top of the car.

As well as the new nose and the cover panel, Mercedes has bonded on small panels to the side of the S-duct outlet, making the height of the bodywork the maximum allowed.

Other aero differences around the front of the car include new front wing mounts, which are very narrowly spaced, with probably half the gap between them of the old nose.

Although narrower they are slightly more twisted, but it appears the aim is to move them out of the way of the side of nose, to allow uninhibited airflow to the new turning vanes under the nose.

These turning vanes follow a similar four-element shape to last year's design, but have received more of Mercedes' favoured slot treatment on the lower edges - which now feature six slots to further tune the airflow.

So while not as extreme as predicted, the new front end is still a deviation from the normal practice and exhibits Mercedes' increasingly complex aero detailing.

With the team eschewing runs on softer tyres for fast laps in favour on long runs on the medium tyre, it will be hard to assess the performance gain with the nose. But on paper the idea should offer a reasonable step over a standard design. 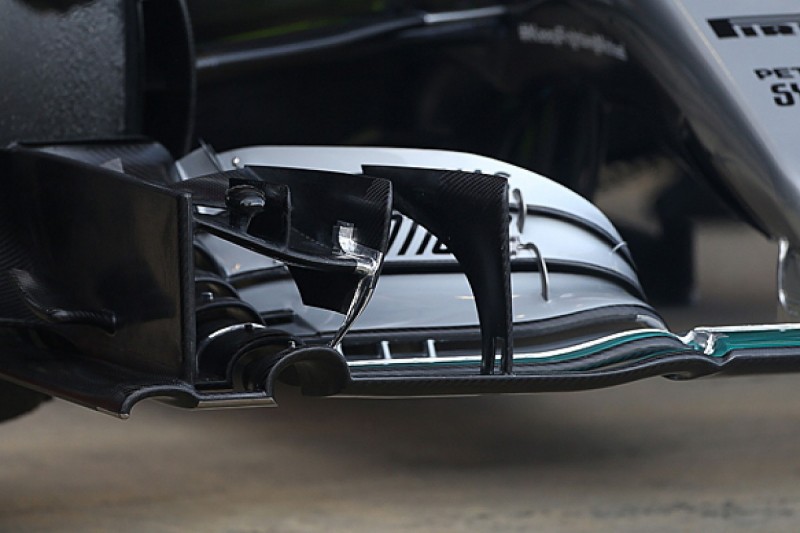 Pirelli set for breakthrough in battle over 2017 Formula 1 testing