Fernando Alonso said his Dutch Grand Prix felt like "70 laps of qualifying" as he fought from 13th to sixth, boosting Alpine’s bid for fourth in the Formula 1 constructors’ championship.

Alonso dropped out in Q2 on Saturday at Zandvoort after being hindered by traffic, but managed to battle his way up the order through the opening stint of the race.

Alpine was one of the first teams to switch to the hard compound tyre, helping Alonso move up the order before planning a return to softs for the final stint.

The Spaniard managed to keep McLaren’s Lando Norris at bay after the late safety car to cross the line seventh, moving up to sixth after Carlos Sainz’s five-second penalty had been applied.

“It was good, it was 70 laps of qualifying today because we could not relax at any point,” Alonso explained after the race.

“The start was good, but I lost places on the outside of Turn 1, so I had to fight very hard to recover some, then we put the hard and we had to push very hard to make that middle stint work.

“And then when we thought that it was a more relaxed part of the race at the end with a good freshness of tyre, it came to safety car and we have to fight again all the last 12 laps.

“It was a very demanding race for sure.” 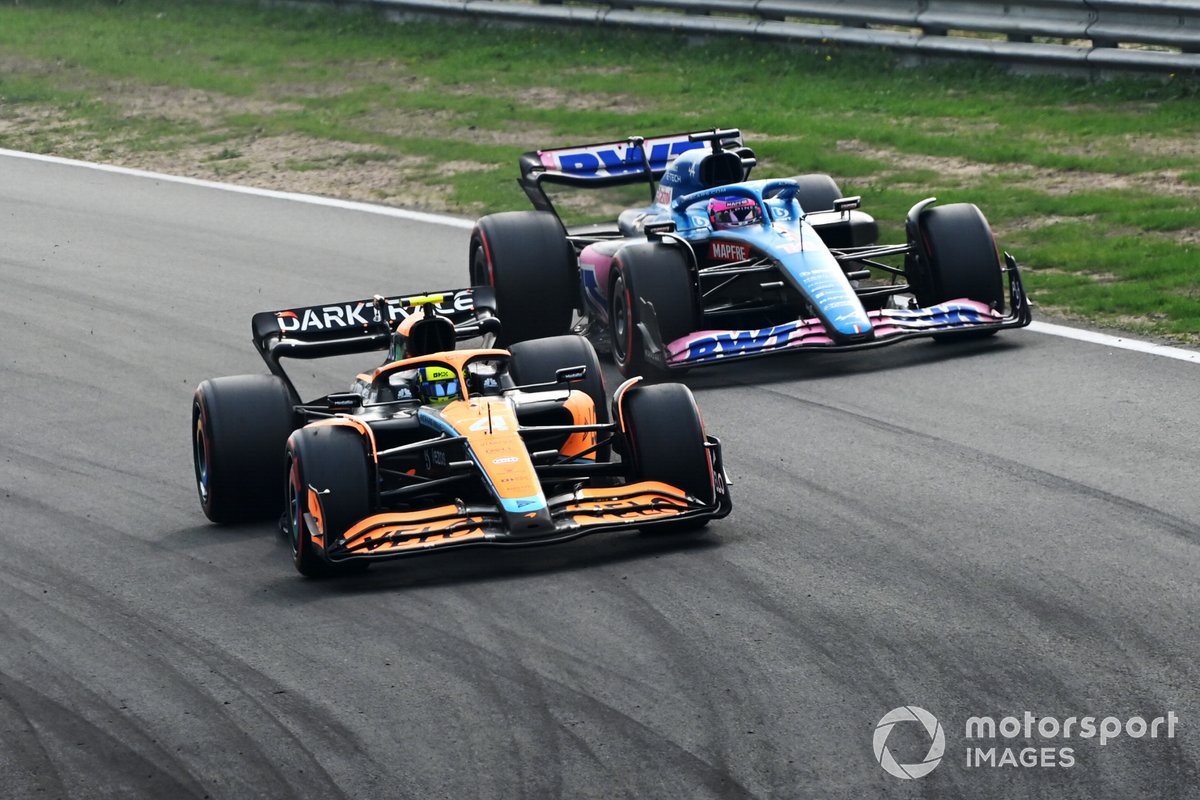 Alonso did manage to get close to Sainz and Red Bull’s Sergio Perez at one stage as they battled for position, but he was wary about it opening the door for anyone chasing him.

“I knew that Carlos had the five seconds penalty, so I didn't want that they fight too hard and they put me in problems with the car behind,” said Alonso.

“It was it was a good race and obviously I know the position gained at the end, we did it in Spa, one spot from Ferrari and one here also from Ferrari. So we gain always one position!”

Alonso revealed Alpine’s pre-race simulations only had him finishing as high as ninth, making the result a welcome boost for the team in its constructors’ fight with McLaren.

Alpine now sits 24 points clear in the battle to top the midfield and finish fourth in the standings, aided by Esteban Ocon’s run to ninth place.

But the Frenchman was left lamenting running the soft tyre too long in the opening stint, staying out six laps longer than Alonso who managed to get the undercut.

“We lost a good eight or nine seconds in the beginning trying to stay on that soft tyre for longer,” said Ocon.

“That was where we lost the race today. So it’s a bit of a shame, but it’s still a good recovery, coming back with both cars into the points from where we were. It’s a solid effort, but today there was much more possible on the table.

“Sixth was definitely my place today. That’s what we’re going to try and chase in Monza.”