The world championship leader had led the way after the opening runs in Q3 but did not make as big a gain as Bottas on his final effort. He missed out on the top spot by just 0.097 seconds.

Reflecting on what happened, Hamilton said that he simply failed to hook up things on the final lap, as he praised the effort that Bottas made.

"Valtteri did a great job and it was a pretty piss poor lap from myself,"said Hamilton. "These things happen, you can't always get it perfect.

While the gap with Bottas is small, Hamilton said he was mindful about the threat that Max Verstappen posed from behind in race, allied to just how difficult it will be to overtake.

"Yeah, they're very strong on their race runs," he said about Red Bull.

"So, what is unfortunate really with this track, and it's so beautiful to drive, is I'm pretty certain you are going to see a pretty boring race tomorrow. 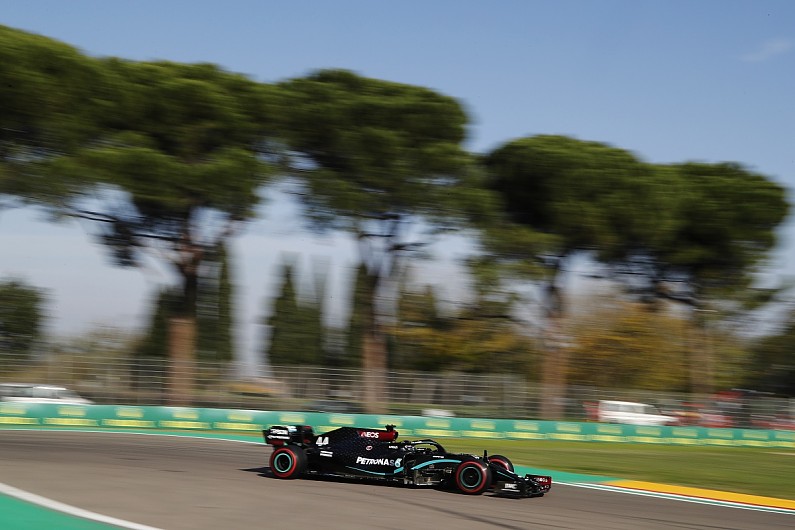 "You can overtake on this long [start-finish] straight but it's quite narrow, and you can't follow.

"Once you get into Turn 1, it's a train from there, there's no single place to overtake anywhere else. So it's going to be a challenge to the people following.

"But again, as I said, the DRS hopefully will give some overtaking opportunities into Turn 1 for people.

"For us, you see we're within half a tenth of each other. But to have an opportunity of overtaking, I think the gain has to be something like two seconds of speed or something to the car ahead to have a chance.

"Nonetheless, I'm gonna give it everything I've got tomorrow and fingers crossed."

With F1 returning to Imola for the first time since 2006, Hamilton said the track had been hugely thrilling to drive on.

"They don't build tracks like this any more," he said. "I don't know why the new guys can't build a track like this. I mean it's just a classic: it's got the history which helps."