Although both Hamilton and Valtteri Bottas had progressed to Q3 on the harder rubber to give themselves a strategic advantage at the start of the race on Sunday, not an uncommon tactic given the big pace differences between the teams in 2020, unusually they completed their final qualifying runs on the mediums.

Hamilton prevailed with his last lap right at the conclusion of the session, which came at the end of a rare double run, which he said he chosen to complete to get "an extra stab" at overturning the narrow advantage Bottas had held throughout practice and after the opening runs in Q3.

Both Mercedes drivers had initially set their Q3 times on the red-walled soft rubber, which is proving hard to warm-up on the front wheels and provide the usual advantage over the harder tyres on the new, low-grip Portimao asphalt.

"Combined with the smoothness of the track, the difficulty that we have with these tyres, and the battle that I'm having with Valtteri, it's making it hard and harder for me each weekend," said Hamilton.

"He's been quickest all weekend this weekend, all through practice, and even into some of this session.

"So, I didn't know whether or not I was going to get a lap that would be able to compete with his. 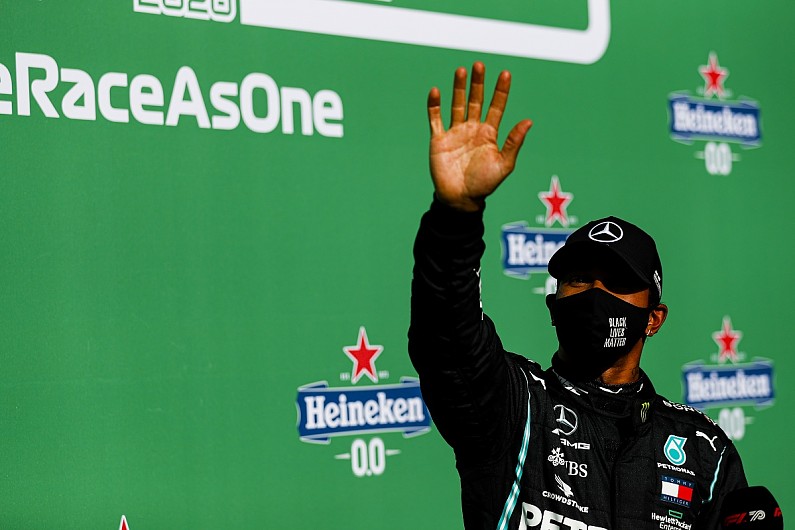 "I was always off by a tenth, half a tenth, whatever it is, but that last decision I took at the end is what I think really created the opportunity.

"We were both given the opportunity to choose between the soft and the medium tyre, which is kind of counter-intuitive going to the medium, because we usually just stay on the soft throughout Q3.

"But the idea of having an extra lap, an extra chance, an extra stab at getting pole looked good to me.

"So I chose to go that extra lap, and I think Valtteri chose the one. But he still did a great job.

"It was still very, very tough, I had to dig very deep - luckily I think I got the last sector just about right. But still, it was so close."

When asked by Autosport how pleased he was to be starting on the medium tyres for tomorrow's race, which may yet be impacted by wet weather in Portugal, Hamilton said: "I think it's going to be a very tricky race.

"Particularly [with] the harder tyre - it doesn't work for several laps, so it's going to be interesting at the beginning.

"We'll obviously lose a bit of performance to Max [Verstappen, who used the softs in Q2] and the guys behind on the softs.

"Really don't know what to expect tomorrow - it's supposed to rain. So that means it's going to be the hardest day for us all if it does.

"Wind and rain - that would really be ice [on the low-grip asphalt]."