On the day Renault truly arrived at Formula 1's top table, one of its drivers stormed to a maiden victory while the other contested one of the fiercest on-track tussles of that era against Gilles Villeneuve. Marking the 25th anniversary of the race in the 1 July 2004 issue of the magazine, Jean-Pierre Jabouille and Rene Arnoux recall the legendary race

One of them resembles a university professor, the other looks like a retired keyboard player from a demented 1970s progressive rock band. And it takes some time for it to sink in that tall, studious Jean-Pierre Jabouille, in smart jacket and jeans, is now 61 years old, and that short, stocky, wide-eyed Rene Arnoux, wearing a bizarrely-decorated sweatshirt, is rapidly approaching his 56th birthday.

It's even more amazing to think that we're here to celebrate the 25th anniversary of these two making history, Jabouille for scoring Renault's first Formula 1 win, team-mate Arnoux for playing a starring role in the same race for what is possibly the most celebrated battle of our sport. It can't possibly be a quarter-century, for anyone born early enough to have seen it recalls the 1979 French Grand Prix at Dijon as if it were only 25 minutes ago.

In today's homogenised world of F1, where the rules are so tightly-written and the theories so tested that thinking 'outside the box' is either illegal or just plain mad, an achievement like Renault's in 1979 would be almost impossible, for here we had a team drawn together from fragments of French motorsport, pioneering turbocharged engines and the use of radical-tyre technology (through Michelin) and with two drivers of unproven pedigree in F1.

Renault had made its F1 debut two years earlier in the 1977 British GP, although Jabouille, who had won the previous year's European Formula 2 title with an atmospheric version of the same engine in a car he had designed himself, retired early. The project stumbled on, but really began to be pushed by Renault after the manufacturer's success in 1978 in what, until then, had been its number one priority, the Le Mans 24 Hours.

Jabouille (pictured below at Long Beach in 1978) credits Elf's visionary Francois Guiter and Renault's Jean Terramorsi for the initial push into F1 with a 1.5-litre version of the two-litre Le Mans engine. 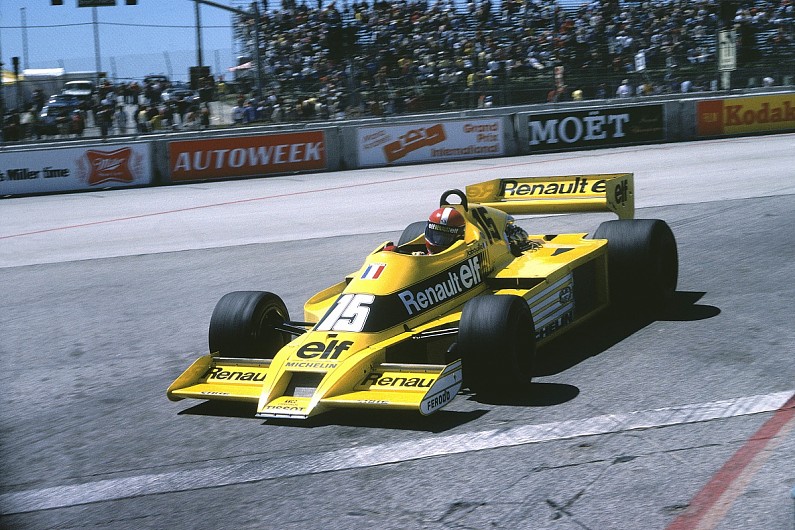 "Francois Guiter paid for two engines because Renault were not sure at the start," recalls Jabouille. "Two people were very important - Francois and Jean Terramorsi from Renault, who was very interested in new technology. The best engine at that time was the V8 Cosworth, and a V8 Renault would be nothing better. With new technology Renault was okay [interested in doing F1], but with an atmospheric engine? Non."

Turbo lag was the big problem, but things improved when Jabouille finally got his hands on the new RS10, a massive leap forward from the RS01 and the first Renault ground-effects 'wing car', in time for the Spanish GP, the fifth race of the 1979 season. Arnoux would have to wait two races longer until Monaco.

Also for Monaco, the team switched from a larger single-turbo unit to smaller twin-turbos. It was a big step in getting rid of turbo lag, although this was the worst track to prove it on, and Jabouille and Arnoux both qualified on the back row of the grid.

There was then a five-week gap until Dijon, where the two Renaults qualified first and second. There were a number of reasons for this. First, the new twin-turbo system kept the revs up better and diminished the turbo lag. Second, the new wing car cornered much faster, allowed the drivers to stay on the throttle in corners and therefore did its own job in reducing lag.

"If you have more grip you have less delay [lag] - they work together," says Arnoux. "When you didn't have grip, it was difficult to use the turbocharged engine and you suddenly had too much power."

Third, the fast, flowing circuit showed off ground effects and again minimised lag; Arnoux again: "You have 'big' bends at Dijon - it's not like Monte Carlo!" Fourth, the altitude of the track (500 metres) - turbo cars always benefit compared to atmospherics when the air gets thinner.

Fifth, work from engine chiefs Jean-Pierre Boudy and Bernard Dudot improved the effectiveness of the intercooler so the engine worked better in warm conditions. Sixth, with a power advantage, Renault could trade off some top speed and run more downforce, further allowing the drivers to use more throttle in the corners, and thus minimising lag once again. 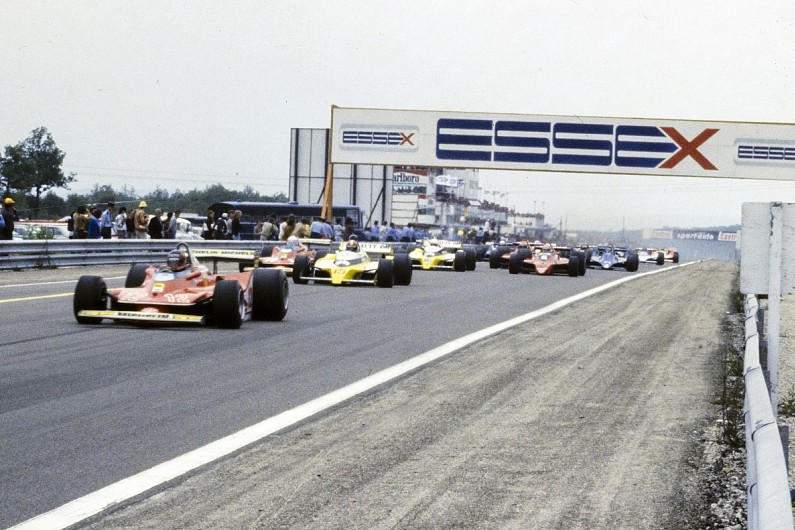 Only one car seemed to threaten the Renaults, and that was the Ferrari of Gilles Villeneuve, also running the Michelin radials and lying third on the grid. As expected, it was the Canadian who shot away at the start.

"The start was okay - it's difficult with a turbo engine when you start, because you balance the accelerator and the clutch just a little bit for the pressure to arrive."

Jabouille also had to be mindful of the front-left tyre, which was vulnerable on the Renaults at Dijon, and the heavy fuel load needed by the thirsty turbo cars. Therefore, he sat behind Villeneuve for the first 46 of the 80 laps before moving ahead into the first corner, immediately putting the hammer down and then conserving his advantage.

"Gilles pushed hard before the first corner and I said, 'Okay, okay'," he recalls. "For the last 10 laps I could feel everything in the engine! But there was no problem for me - Rene and Gilles were fighting and I was 20 seconds in front..."

If the engine didn't give a problem, the brakes did. Jabouille's right leg was numb by the end and he had to be helped from his car.

"The big difference is that with the V8 engine, when you lift the accelerator and don't touch the brake the car slows down," he says. "With the turbo engine you lift and... [he whistles and motions a car going straight on]. You use the brakes a lot compared with the V8 atmospheric. At this time they built the brakes all the same - we used the same discs and the same pads as the atmospherics."

When Jabouille struggled on to the end, Arnoux was making his own history. He made a terrible start and dropped to ninth: "If you use too many revs it's dangerous for your engine. If you have not enough the turbo stops and you don't start. I didn't start!" 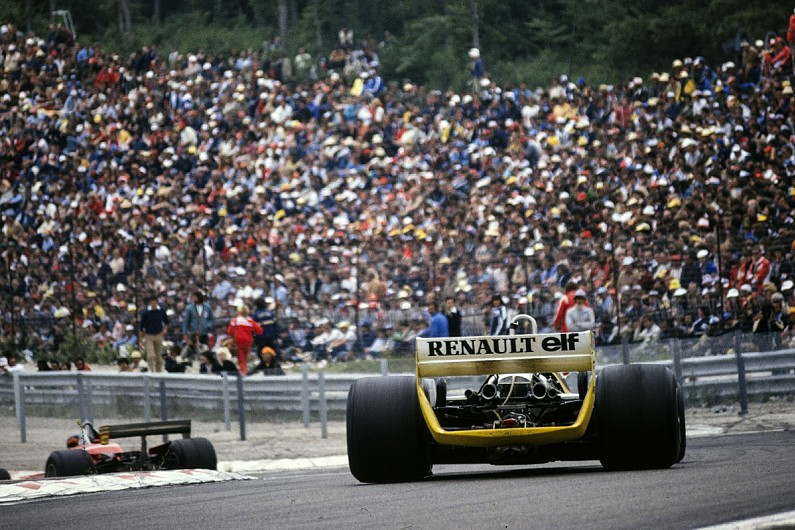 He charged through to lie third at 15 laps. The race settled down, but when Villeneuve lost the lead it became apparent his tyres were ruined. Arnoux responded to signals to go faster - big time. With nine laps left, he lapped more than a second quicker than anyone else in the race and with five laps to go they were together...

PLUS: The ups and downs of a French F1 trail-blazer

With three laps to go, Arnoux went past Villeneuve in the first corner, but the Canadian instantly detected a hiccup with the Renault - it was faltering with a fuel pick-up problem. Inspired by this, he wheelbanged his way around the last two laps with Arnoux in a battle of unprecedented ferocity, but fought out with maximum respect.

"My car was very good but I had a big problem with the fuel," says Arnoux. "It was very difficult for me and we had a very exciting bagarre, rubbing wheels together.

"Gilles was a very good friend of mine - we had the same character and this fight was only possible with him. Whether it was for the win or second place we always pushed very hard, and I remember one time on the exit of the first corner I was inside, he was outside, we had the four wheels like that [he makes an interlocking motion] and I see Gilles' eyes behind his visor!"

Is either jealous of the other's achievements? Jabouille? No: "I prefer to have won the race!" Arnoux? Surprisingly, yes, even though he went on to seven GP wins: "I preferred first position - when you race you always want to win!"

But what makes Arnoux and Villeneuve different from most of their contemporaries was that, if first position was impossible, they fought hard for whatever they could get. You can see that in the twinkle in the eyes of this 56-year-old man, looking back to when he was 31 and fighting for his career. And you can still see a measured approach in Jabouille.

Even back in 1979, F1 science could win out over passion. But wasn't the passion brilliant? 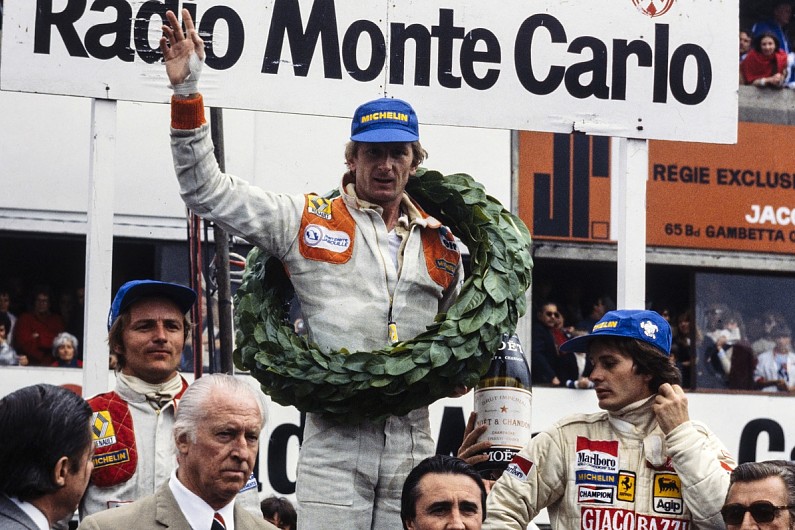