Valtteri Bottas says his second "to whom it may concern, fuck you" message after winning Formula 1's 2020 Russia race was a response to people telling him to "give up".

Bottas echoed the radio call he made after winning the 2019 Australian Grand Prix when he repeated the message after winning Sunday's race in Sochi, which be began with: "nice moment to thank my critics".

When asked to explain his words in the post-race press conference, and to explain if criticism of his results this year against team-mate Lewis Hamilton had been playing on his mind, Bottas said: "No, it's not been.

"But honestly, I just don't get the people who has the need to criticise people.

"There's been people telling me that I should 'not bother', I should 'give up', but how I am, I will never do that.

"So I just wanted to again send my best wishes to them. It just came out.

"But the main thing is I'm confident when I come to every race weekend and I believe I can do it and that's how I'm always going to be. You have to have that mindset.

"And I'm glad even [though] yesterday was tough, I didn't give up, I looked at the positives and I knew there would be opportunities. And things came to me today. 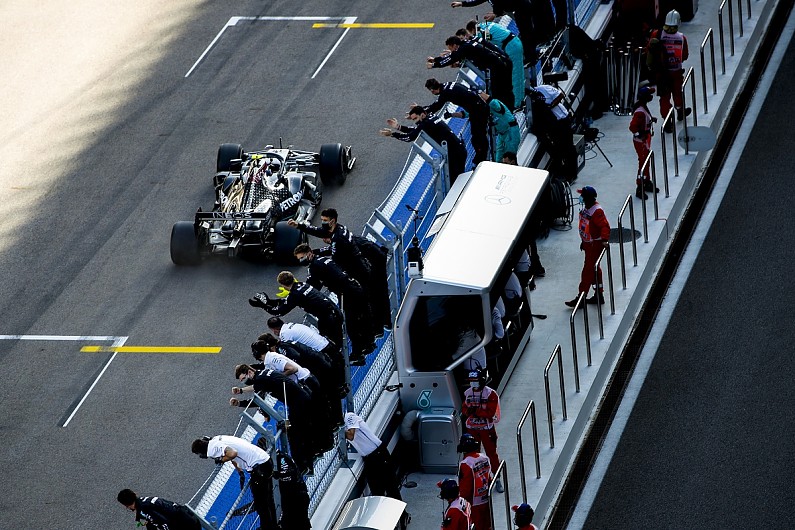 "So yeah, I hope I can encourage people not to give up because that's the biggest mistake you can do in your life."

Bottas won the Russian GP for the second time after controlling Sunday's race once early leader Hamilton had pitted on his inferior soft tyre starting strategy and after the world champion had served a 10-second penalty at that stop for a double pre-race practice start infraction.

The Finn said his result, which has cut Hamilton's points lead from 55 to 44, was a "good confident boost and good momentum for the next races".

"[My last win was] a while ago, but it's been so close many times," he explained.

"I feel my race pace especially this season has been quite a bit better than in any season before.

"I can't say it's been frustrating but it's been a bit annoying that it's been close but nearly there, but things definitely did go my way today.

"As I've been saying, things can't go against you forever. So definitely really satisfying today. To get the win, [it] felt like it was well earned, obviously consider myself lucky as well with Lewis's penalty.

"But otherwise it was a strong race."