Tyres play an enormous role in Formula 1 races and a good understanding from both the drivers and teams of getting the best from them is vital to success.

Across motorsport, different series have very different relationship with their tyres - from a key strategic tool to a mere functional component of the car.

Tyres are complex to design and produce, the rules surrounding their usage are complicated and they are even more bewildering to get working properly across a range of conditions.

How are F1 tyres made?

F1 tyres are produced by Pirelli and are a feat of engineering on their own. It all starts in the laboratories where research is conducted into different structures and compounds and computer simulations allow the engineers to come up with tyres that meet the correct specifications. From there prototypes are built and tested, undergoing much more severe conditions than they would be put through during a race. After that the tyres are tested on the track before going into production.

The first part of the process is to produce the bead wire and carcass of the tyre while simultaneously the belt and tread are made. Once all these components have been assembled the tyre undergoes vulcanisation where it is put in an oven and heated to define the characteristics of that particular compound. The tyres are made up of a mix of natural rubber, synthetic rubber and other artificial fibres.

Each tyre is subjected to strict quality controls including visual checks, x-ray scans and weight checked. A random sample is chosen for destructive tests to see how the tyre behaves under duress. Each tyre also has its own unique barcode so that it can be tracked from when it was made, to which team receives it to how many laps it does on track. The total manufacturing process for each tyre takes approximately five hours.

F1 tyres are filled with nitrogen as it is more stable than air and behaves predictably even when the temperature varies. 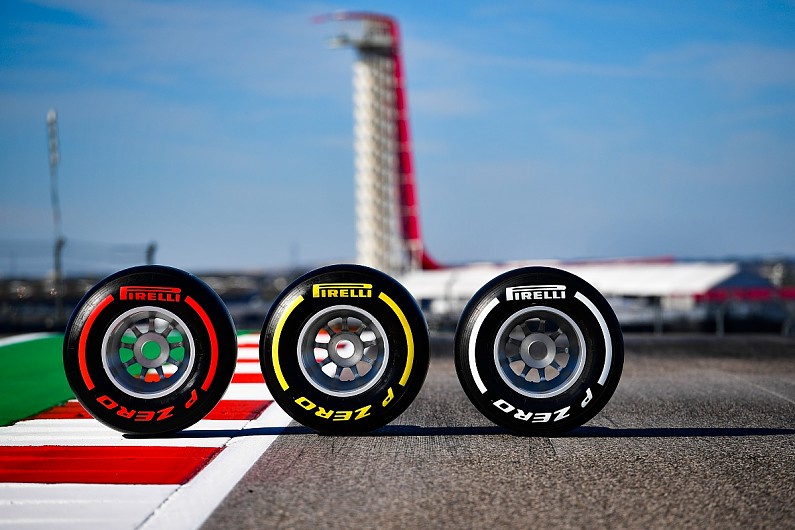 F1 uses seven different tyre compounds which comprise five slick variations, an intermediate and wet weather tyre. Three of the slick tyres are available per race, labelled as soft, medium and hard and each car must run at least two of those tyres during a dry race. The tyres are colour coded, with a white stripe on the hard, yellow on the medium and red on the soft.

The tyres range in softness, but the teams must balance the desire for soft, quick tyres with the resultant short lifespan with the durability of the slower hard tyres. This balance is the basis of F1 tyre strategy and often makes or breaks a driver's chance of success in a race.

The wet tyre is grooved and can disperse up to 65 litres of water a second when the car is going full speed. In comparison the intermediate tyre is more suitable when there is rain but no standing water or on a damp track and acts as a crossover tyre between slicks and a properly grooved rain tyre.

Drivers that qualify in the top 10 must start the race on the set of tyres that they used to set their fastest time in Q2, often giving the driver in 11th the slight advantage of being able to start on whichever tyre they like.

Each driver receives 13 sets of tyres per race weekend from Pirelli and although Pirelli decides which three tyre compounds will be used the teams get to decide how many they choose of each compound. For flyaway races the teams must make their selection 14 weeks in advance and for European races eight weeks before the race.

However for at least the first eight races of 2020 all the drivers will receive two sets of hard tyres, three sets of mediums and eight sets of softs in order to make it easier for both Pirelli and the teams to plan ahead during a condensed and changeable season. 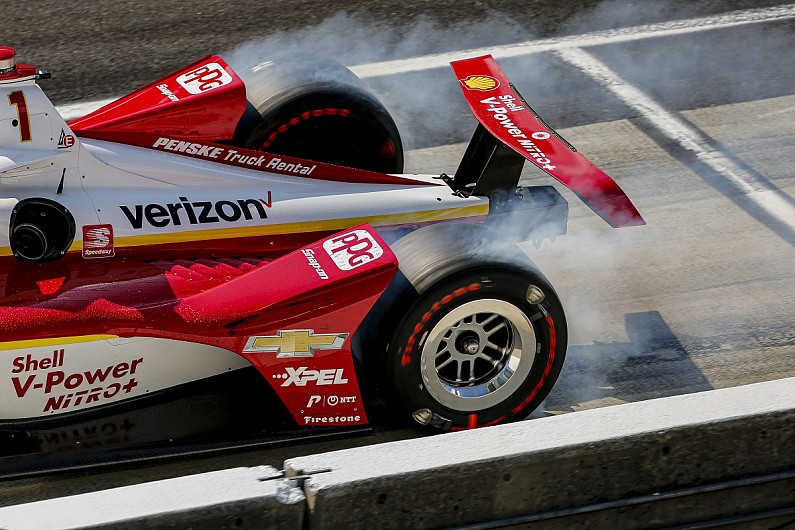 Firestone produces over 60 unique tyre specifications for each IndyCar season to perfectly suit different tracks and conditions. While for each oval race there is only one compound of tyre available, at road and street tracks there are primary, softer alternate and grooved rain tyres all on offer.

Depending on the type of circuit the tyres have to work differently to fulfil the maximum potential. At ovals and speedways the tyre camber is set up so that both tyres are leaning to the driver's right in order to remain balanced at speed when the car is only turning left. On road and street circuits the suspension is tweaked so that the tyres are turning inwards to help the car turn both left and right. 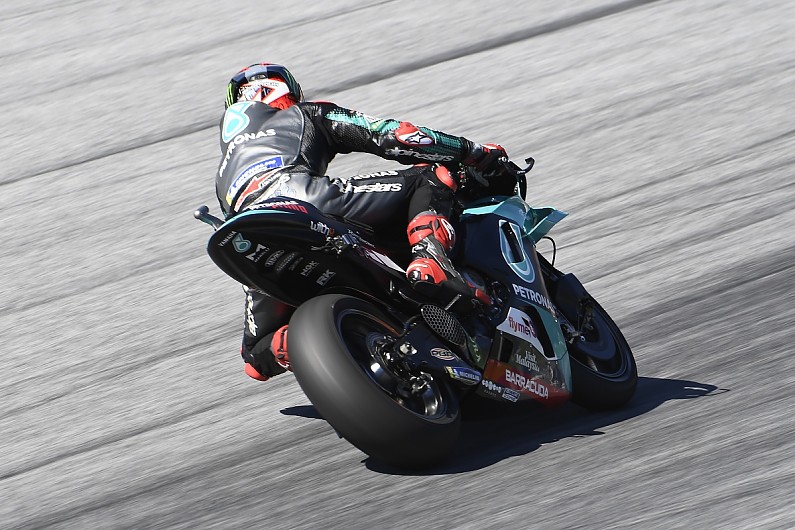 MotoGP's thin tyres are subjected to huge amounts of force around the race track. Along a straight the rear tyre is put under more than 2200 newtons of force which is the equivalent of 224 kilograms and during braking the front is subjected to more than 2500 newtons (254kg).

In dry conditions the front tyre reaches temperatures over 100 degrees and the rear tyre gets even hotter, exceeding 120 degrees. Official tyre supplier Michelin mandates that tyres are heated up to 90 degrees before the bikes go out on track.

Each rider has 22 tyres allocated to them per race, 10 front tyres and 12 rear, to use in dry conditions with an additional set available if they take part in both qualifying sessions. In the case of rain 13 wet weather tyres are also made available per rider.

Like F1, MotoGP has three different compounds of tyres available per race labelled as soft, medium and hard, although the actual durability of the tyre compounds vary from race to race. The different compounds can be told apart by the coloured stripes on the tyres, with white denoting soft, yellow hard and no stripe medium.

However, unlike F1, at some circuits MotoGP use asymmetrical tyres, which means that a different compound is used on each side of the tyre. If the circuit has more left-hand corners than right, or vice versa, then a compound that is slower to wear is used on that side without having to compromise the whole tyre. 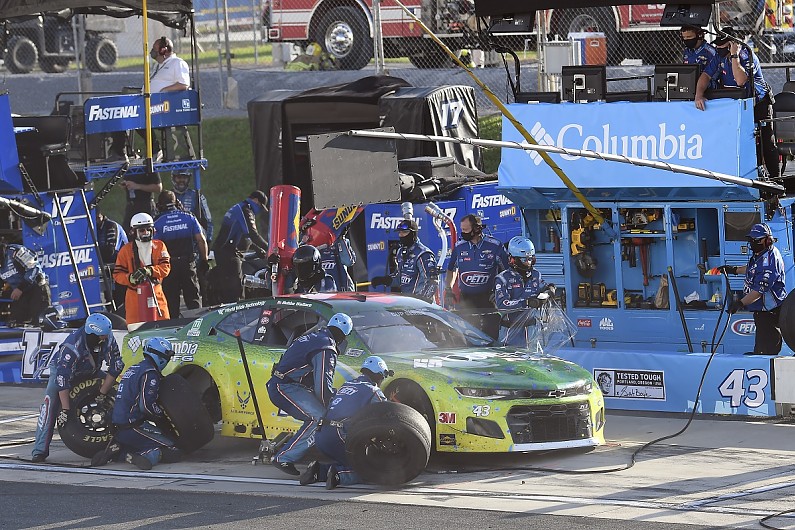 Goodyear produces 18 different types of tyre to use across the NASCAR calendar but the cars only have one compound of tyre to work with per race. The number of tyres allocated to each driver varies from race to race depending on the circuit. The tyres on the right side of the car are slightly more inflated than those on the left-hand side and are also larger by one inch in order to help the car to cope with constantly turning left.

On tracks that are longer than a mile, each tyre must contain an inner liner that is essentially a second tyre inside the first so that it is possible to keep the car under control even if the outer tyre blows. This safety feature helps to prevent serious accidents on faster tracks where there is no way of driving the car out of a dangerous position. 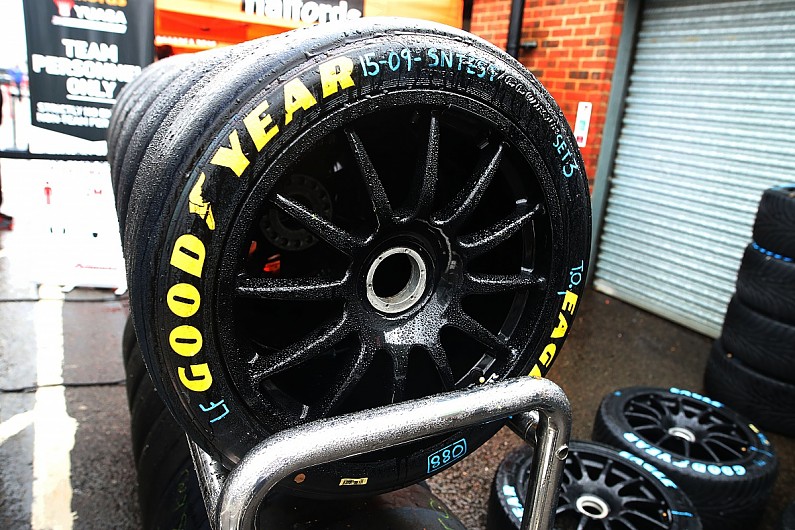 Under normal circumstances, the BTCC use three different tyre compounds plus wet weather tyres across a season, supplied by Goodyear. For each event it is mandated which two of the three tyres will be nominated as the option and standard tyres and must be used across the race weekend. The teams and drivers are then able to choose which tyre they will use for which race, according to their own strategies.

However, due to the coronavirus pandemic, for 2020 the cars must solely race on the medium tyres at all tracks except for Thruxton, where the hard tyres are to be used. The decision was made on the basis that with a condensed calendar removing the option-tyre format would make life easier for the teams. 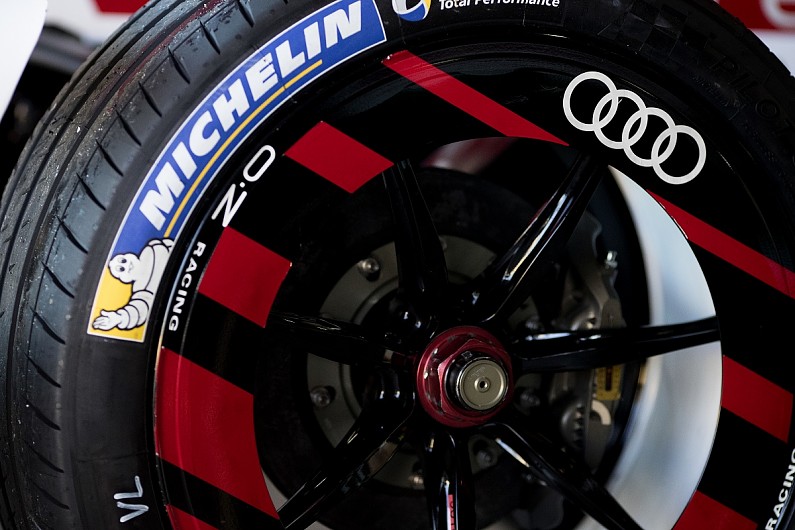 Formula E tyres are somewhat unusual in that they are grooved. Even though the cars would go quicker on slick tyres that provide a greater contact surface with the track, Formula E decided that it was more important to be road relevant and create technology that would be transferrable to everyday driving. The series also feels that it is wasteful to cart around separate tyres for wet weather and the extra resources that would entail. Over the years the tyres have been made lighter and lighter in order to reduce CO2 emissions from transporting them all over the world.

Formula E's low profile 18-inch tyres are designed to be as efficient as possible in minimising wind and rolling resistance in order to use less energy during a race. The cars do not usually change tyres during a race, and for the 2020/2021 season onwards drivers only have three front and three rear tyres to use per single event, with the allocation going up to four front and rear tyres for a double-header. Rather than creating varying race strategies through the use of different compounds, Michelin only makes one type of tyre for the series. 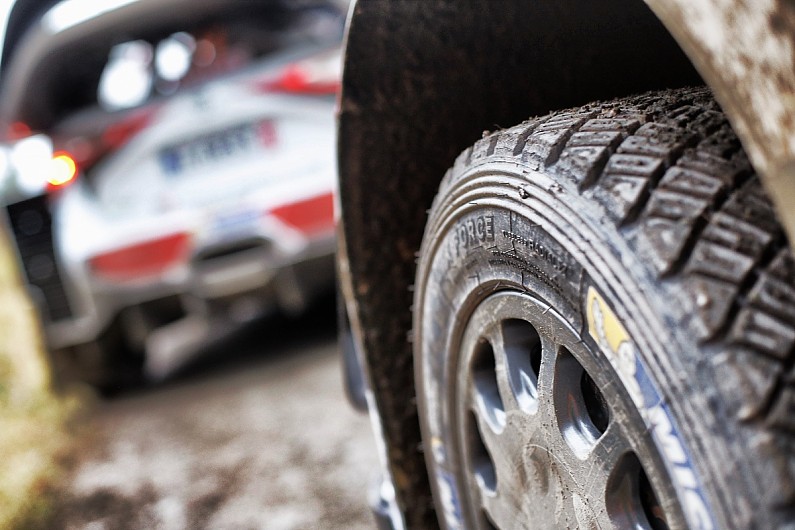 The World Rally Championship uses a variety of tyres for the very different surfaces the cars encounter across a season. Which tyres, and how many are allocated to each car, is decided for each individual event, depending whether the rally will be run on asphalt or gravel and if rain or snow is anticipated. For most events there are only two tyre compounds to choose from, although for Monte Carlo there are two compounds of asphalt tyres plus studded and non-studded snow options on offer.

Presently Michelin produces the tyres for the all the manufacturer WRC cars, although for 2021 Pirelli will take over as the control tyre supplier for the series. The tyre supplier places advisors with each team to properly understand how each compound works in different conditions.