Sebastian Vettel says something "doesn't stack up" over the struggles he faced with his Ferrari throughout the Formula 1 British Grand Prix.

While his team-mate Charles Leclerc finished on the podium on Sunday at Silverstone, Vettel endured a tough afternoon as he failed to make any progress up the order and came home in 10th spot.

Reflecting on his afternoon, Vettel said that he never felt comfortable in the car.

Furthermore, his inability to match the pace of those around him suggested that something out of the ordinary had come in to play.

"The car was very difficult to drive," he told TV reporters after the race.

"I struggled a lot to find my confidence and I don't know why, so we need to have a good look.

"But certainly, if I struggled for so many laps in the race, and it was from the beginning to the end, then there's something that probably doesn't stack up.

"It was not a very stressful race. I just didn't have a chance. People around me were faster than me. I got overtaken. It was very difficult to manage myself to stay on track.

"Physically it was not a tough race at all because I could never attack the car.

"It didn't allow me to do what I like so. Now we need to have a look why and obviously we have the next weekend so we can try and do better." 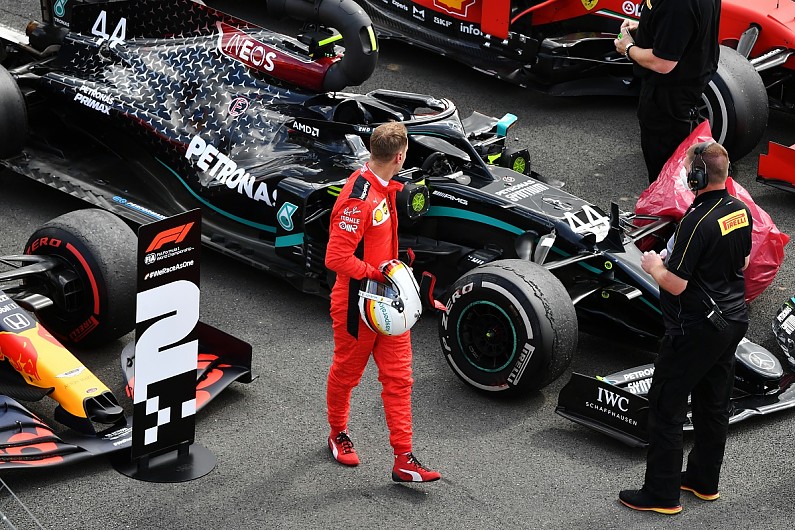 Ferrari team boss Mattia Binotto admitted that getting to the bottom of Vettel's struggles was the priority for the team now during the gap before next week's return to Silverstone for the 70th Anniversary GP.

"If you look at our race today, at least on Sebastian's side, it was a difficult race. On his car, we can do a lot more," Binotto told Channel 4.

"He lost some track time on Friday, which was not helping.

"But he was never confident with the car this weekend, so there is a lot of data to look at, to try to understand and to address it.

"So while eventually on Charles we will look at the data, and try to optimise and let's see what we can do, there is much to do on Sebastian."