The 2014 Formula 1 season might not be considered an all-time classic, but unpredictability during a predictable campaign gave the Hungarian Grand Prix a surprise winner, stunning overtakes and cranked up tensions between title protagonists

In my childhood, I always considered the Hungaroring one of Formula 1's most dispensable venues. I know that offends the sensibilities of F1's 'European Heartlanders', but let's face facts: mostly the Hungarian Grand Prix was dull, dull, dull.

There are some notable exceptions: Nelson Piquet's submission for the best overtake of all time at the first Hungarian GP in 1986; the man he passed, Ayrton Senna, narrowly beating his nemesis Alain Prost in 1988; Nigel Mansell winning from way down the grid in 1989; Thierry Boutsen pipping Senna to victory in 1990; Damon Hill's almost-victory for Arrows in 1997 and Jenson Button's astonishing 2006 win for Honda after starting 14th. The 2011 race - Button in mixed conditions again - was good too, but that's a handful of examples from 28 editions, spanning 1986-2013.

In general, the circuit's too narrow, too tight, too twisty - you basically can't overtake unless the conditions are changeable, or it's the late 1980s.

But since F1's hybrid engine era began, the Hungarian Grand Prix has taken on a new lease of life. Lewis Hamilton versus Max Verstappen in 2019; Sebastian Vettel hanging on in a broken Ferrari in 2017 (after Verstappen punted Daniel Ricciardo off); the Mercedes drivers finishing sixth and eighth in 2015 after Hamilton went off on lap one. It's become a race often full of drama and intrigue - one, dare I say it, to look forward to.

The best of the lot (so far) came in 2014. OK, I admit this not generally considered a vintage year in F1's lineage: new aerodynamic rules that spawned many ugly cars with those unsightly 'proboscis' noses; engines that sounded so crap that Mercedes earnestly developed an actual trumpet to stick on the end of the exhaust pipe. 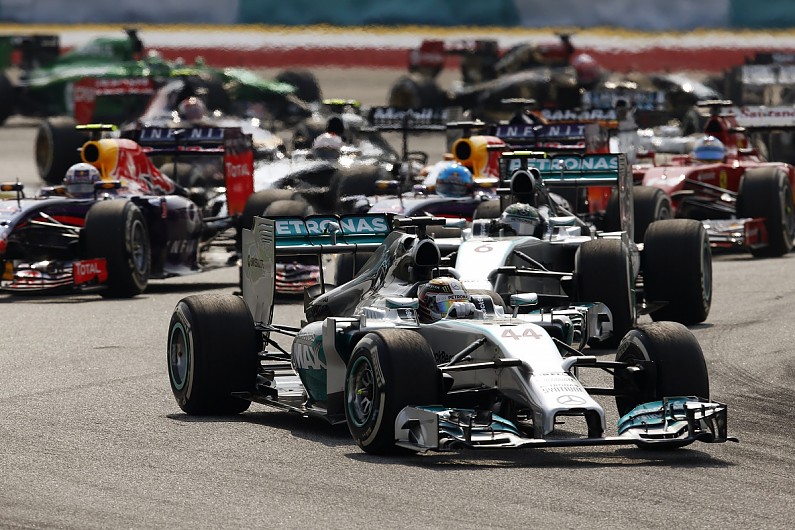 And while we're talking Mercedes, this team's almost total annihilation of the opposition that season also meant the results of most of the races were pretty much a foregone conclusion, making F1 a tough sell for even the most ardent of fans.

Canada's MGU-K-induced brake problems aside, by the time the circus reached Hungary Mercedes had been utterly unstoppable for the best part of six months, and honestly there was no real reason to suspect anything would change in Budapest; even less so once Nico Rosberg claimed pole position by almost half a second.

Even if this was to be another to add to the long list of Hungaroring dullathons, we at least had the prospect of watching the title favourite try to carve his way through the field

Had Hamilton's car not caught fire in Q1 it would likely have been another front row lockout for the Silver Arrows, probably with Lewis ahead considering he topped all the practice sessions.

But that fiery breakdown was the first sign this might turn out to be an extraordinary weekend after all. True, Hamilton had come from well down the grid to finish on the podium in the previous race in Germany, after a front brake disc failure put him out in qualifying, but surely he couldn't repeat the feat at the Hungaroring? Hamilton isn't Nelson Piquet, it's certainly not 1986, and this time Hamilton would be starting from the pitlane...

The spectacle of live sport thrives on the unexpected and feats of achievement against the odds. Even if this was to be another to add to the long list of Hungaroring dullathons, we at least had the prospect of watching the title favourite try to carve his way through the field.

As it turned out, this race had a bit of everything: a wet track to start the race on, some monster shunts, two safety cars, two world champions spinning off and almost crashing into the barriers, team orders controversy, a brilliant on-track dice for victory in the closing laps, and an unexpected winner.

The pre-race rain combined with those early safety car periods is what set this up to be a humdinger of a Hungarian Grand Prix. 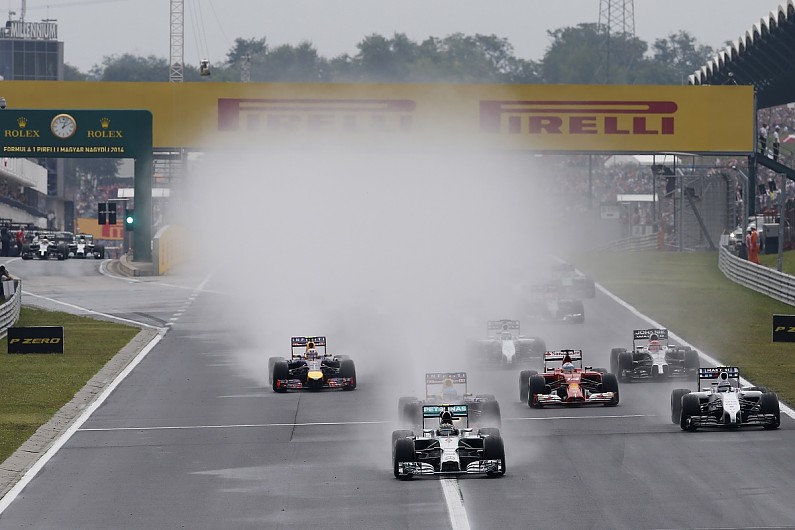 The first safety car, called after Marcus Ericsson piled that awful 2014 Caterham into the barriers at high-speed at Turn 3, was timed such that the top four drivers in the race at this point: Rosberg, Valtteri Bottas, Vettel and Fernando Alonso, all had to complete an extra lap before making their first pitstops.

The second, called after Sergio Perez spun on the damp final corner exit kerb and clattered into the pitwall, created yet more strategic confusion for those sat on the other side of it. Vettel did a similar thing to Perez, and was lucky the outcome was different, thanks to spinning 360-degrees instead of 90.

All that madness meant this race had five different leaders: Rosberg, Daniel Ricciardo, Alonso, Hamilton and briefly Button's McLaren. Hamilton's refusal to help his bitter title rival, by ignoring a team instruction to move aside in the middle portion of the race, also hindered Rosberg to the point where he was never able to get back into proper victory contention after that early misfortune.

Conversely, it helped Hamilton recover from his own pitlane start and first-lap spin at Turn 2, to the point where he had a genuine shot at winning the race; and it created the circumstances for a brilliant three-way shootout for victory between Alonso, Hamilton and Ricciardo in the closing laps.

Ricciardo's late pitstop for fresh soft Pirellis dropped him to the back of this trio, but of course gave him the freshest rubber for the final showdown. Alonso did an unbelievable job on ageing softs in the woeful Ferrari F14T to somehow hang onto the lead against Hamilton's superior - though slightly end-of-straight compromised - medium-tyred Mercedes, all while Ricciardo homed in on both.

Ricciardo joined the lead battle with eight laps left. Then we were treated to some magnificent racing - including the sort of brave and expertly judged overtaking that Ricciardo would make his trademark in F1. 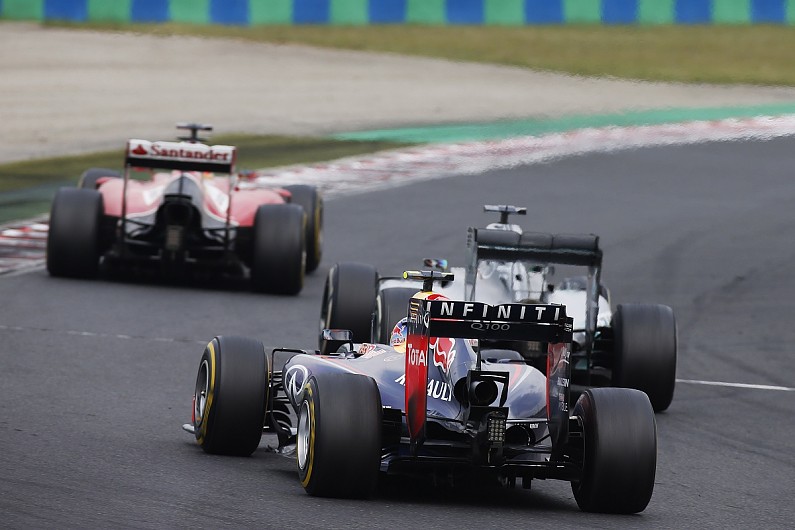 Ricciardo's first attempt to pass Hamilton failed - the Red Bull driver locked up at Turn 2 and ran wide. But two laps later, with just four left to run in total, Ricciardo dispatched Hamilton by flinging his Red Bull around the outside of Hamilton's Mercedes at Turn 2. Ricciardo locked his brakes again, but somehow made the move stick.

As Ricciardo swept to a second career F1 victory, we were treated to Rosberg attempting to pass Hamilton on the final lap. Hamilton ran Rosberg out of road and their mutual acrimony deepened further

That left Alonso a sitting duck in the lead, the Ferrari's tyres simply too worn to put up any real resistance when Ricciardo dived down the inside at Turn 1 at the start of the following lap. Alonso's hopes of victory had rested on Hamilton successfully fending off Ricciardo, but the Spaniard still did incredibly well to finish second in that absolute dog of a car.

As Ricciardo swept home to a second career F1 victory, we were treated to the sight of Rosberg also attempting to pass Hamilton around the outside of Turn 2, on the final lap. Hamilton ran Rosberg out of road and their mutual acrimony deepened further.

But there were no such negative feelings among neutrals watching this race. A popular surprise winner who had to do it by passing cars on a notoriously difficult track for overtaking; a 'peak Alonso' heroic drive to almost win in a terrible Ferrari; the two championship protagonists causing trouble for each other on track while deepening their brewing personal feud off it. What's not to like?

I think this must go down as my favourite race (so far), simply because it was all just so unexpected. Exactly how the best sporting spectacles should be. 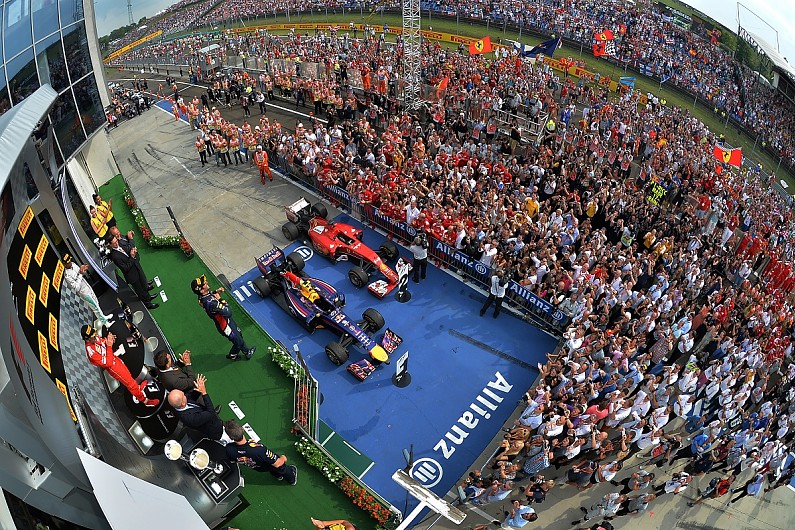