Ercole Colombo, one of the most prominent Formula 1 photographers of the last 50 years, has been made Cavaliere al Merito della Repubblica Italiana, one of the highest honours in the Italian system and equivalent to being knighted.

Colombo is from Monza and his passion for motorsport was ignited in 1951 by his father, who took him aged seven to watch Juan Manuel Fangio and Alberto Ascari racing at the legendary Autodromo near their home, which is the traditional venue of the Italian Grand Prix. He maintains his studio within a few hundred metres of the entrance to the circuit.

He served for many years as photographer to Enzo Ferrari, capturing countless behind the scenes images as well as racing action. Since the death of the Commendatore in 1988, Ercole has continued to supply the Scuderia with images from F1 grands prix.

In 2018 his image archive, the world's largest privately owned collection of Ferrari images, was acquired by Motorsport Network and today is part of the Motorsport Images collection, along with the work of Rainer Schlegelmilch, LAT, Sutton Images and Giorgio Piola.

"I'm humbled by this very unexpected honour," said Colombo. "I'm just a normal person who worked for 60 years and has always done the job with passion and commitment. My work celebrates the wonderful world of cars and racing. I'm proud that my images will live in the future and they can tell the stories I caught with my lens.

"You have to be curious to be a photographer. You have to try to capture the moments that you deem important. A photo, if it's taken well, if it's perfect, it doesn't need explaining and tells you what has happened." 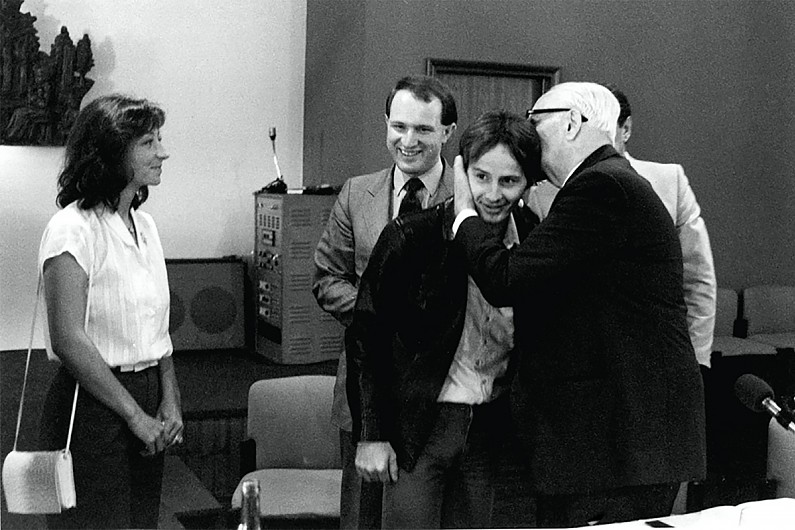 Ercole's favourite image from the millions he has taken is the much-celebrated one from 1980 of Enzo Ferrari embracing his driver Gilles Villeneuve (above), whom he considered almost like a son.

"We were in Casinalbo, near Modena, during the press conference for the presentation of the following year's team," recalled Ercole. "The day before, during the Italian Grand Prix, Gilles Villeneuve had a terrible accident. He arrived late because he had gone to the hospital for an X-Ray.

"As he got closer to Ferrari and reached out to him to say hello, they shook hands. There were two other photographers, but I did not shoot at that point, you know when you feel the moment is not relevant. Then Enzo pulled him in and gave him a kiss. I shot and the others were not ready. Enzo Ferrari liked this picture so much that he asked for a copy of it. I took it to him personally and he signed a copy for me."

Ercole was notified of his honour by letter, however the investiture ceremony will be rescheduled to a later date once it is considered safe after the coronavirus pandemic has passed.