Kubica's 1m16.942s lap, set during the morning session on a set of the C5 tyres, was out of reach for the drivers participating in the afternoon - in which only Haas's Romain Grosjean carried over from the morning.

Having suffered from a spin early on in the session at the last chicane, Kubica bolted on the softest tyre compound to post his quickest time of the day, which withstood the afternoon's siege as the focus shifted to race simulations.

Taking over from team-mate Alex Albon for the afternoon, Verstappen was the fastest driver in the final four hours of running, vaulting up to second on the overall timesheets with a 1m17.347s lap on C3 tyres.

Verstappen then locked up at Turn 10 with five minutes left on the clock, and was unable to get going once again - remaining stranded in the runoff area to trigger the final red flag of the day.

The afternoon's running had been largely incident-free before that, with most drivers conducting a flurry of long runs on the harder compounds to simulate race mileage. 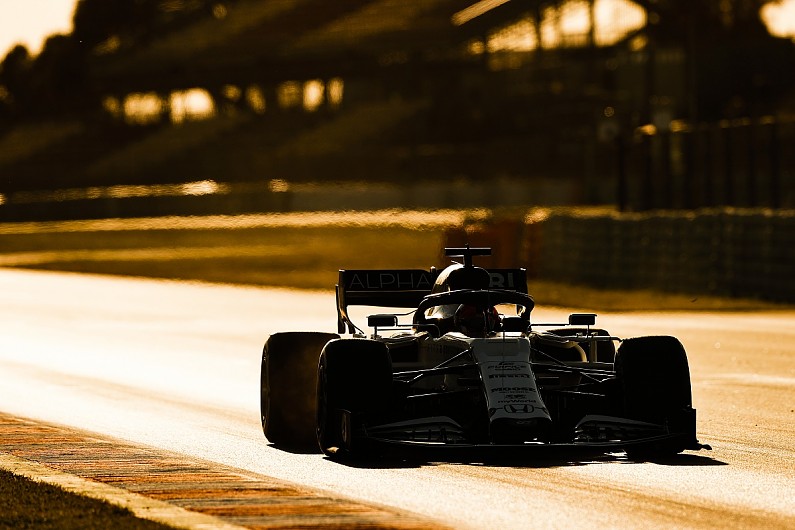 AlphaTauri's Daniil Kvyat also came to a halt at the end of the session, albeit in unrelated circumstances to Verstappen as he stopped next to Turn 4.

Racing Point's Sergio Perez got within a tenth of Verstappen on the same C3 compound with 20 minutes remaining, while Kvyat similarly produced a late fast lap prior to his stoppage, which was good enough for fourth overall.

Pierre Gasly filed in behind team-mate Kvyat despite only managing 25 laps in the morning session, having been stranded in the garage with a loose pipe aboard his AT01 car.

He was just one hundredth of a second ahead of Albon, who also had very little running in the morning due to suspension problems.

Lewis Hamilton recorded 89 laps in the morning - with the best among those a 1m17.562s - to slot into seventh ahead of Lance Stroll, who continued Racing Point's impressive testing pace and led a portion of the pre-lunch running.

Valtteri Bottas took Mercedes' total lap count to 179 for the day, ending up ninth, while Sebastian Vettel suffered an early spin at Turn 8 but completed the overall top 10.

Vettel's excursion prompted the first red flag of the day after the Ferrari driver kicked up a hefty amount of gravel onto the circuit, while the second came courtesy of Nicholas Latifi - who had to pull over at the exit of Turn 9.

Latifi later divulged that his Williams had suffered from an oil systems problem, which curtailed his running for the day before George Russell took over for the afternoon.

Grosjean racked up the most laps of the day with 107, although Mercedes completed the most miles overall.