Sebastian Vettel believes the cornering strength of Ferrari's 2019 Formula 1 car may have cost it straightline speed, but needs more data to be sure.

One of the traits of the Ferrari last season was strong top-speed performance, but Vettel and Charles Leclerc seemed to struggle in this area in the Australian Grand Prix.

Red Bull motorsport advisor Helmut Marko hinted this week that this could be a mix of Ferrari backing off because of cooling problems and being pegged back by closed engine loopholes for 2019.

Asked by Autosport if Ferrari had lost its speed advantage, Vettel said: "We were losing out everywhere. When I say everywhere, that means also down the straights.

"I wouldn't draw too much conclusion. Last year we had a very efficient car and maybe at the end of the year we were a little short in terms of downforce, so then you can be faster down the straights.

"So, I think this year's car, if it gives us the feeling that we know is a very strong car, is very fast round the corners, maybe then it's a bit slower down the straights.

"But I think we haven't had enough track time yet, [enough] races, to really give a fair answer."

Vettel evaded a question from Autosport about Marko's assertion Ferrari had a cooling problem and a need to save fuel in Melbourne.

"Well it always depends where you are compared to others," he said. "But I don't think that we are in a different ballgame to other people.

"After the race, on the plane, we had a few laughs.

"Helmut was sleeping so I'm not sure where he did his analysis!"

Vettel finished more than a minute behind race winner Valtteri Bottas's Mercedes in Australia, where Ferrari was much less competitive than in pre-season testing.

Ferrari has applied "corrections" ahead of this weekend's Bahrain GP based on what it learned from a difficult opening weekend but Vettel said the "answers" may only be partly useful. 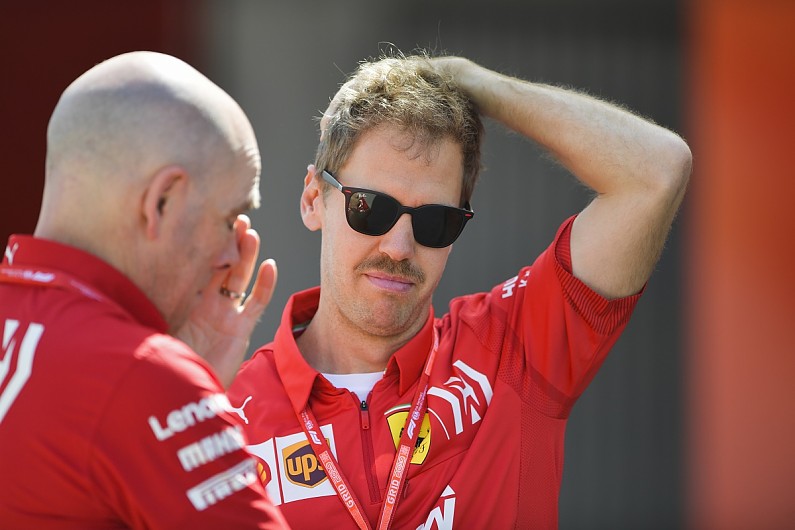 "The key factor for me is that I drove a car in winter testing that I really liked and felt really comfortable in, it was doing what I want, I didn't have much to moan or complain about - and we went to Australia and it wasn't there," he said.

"We have some answers in terms of the lack of performance for Australia. But we don't race in Australia again."

He added: "We'll never get the real answer because you don't go back until next year.

"You throw everything in the mix and we have reason to believe we should be stronger here, but I don't want to put a number to it.