The three-time world champion was again more than half a second quicker than his nearest opposition, which in FP2 came in the form of Sebastian Vettel's Ferrari.

Vettel was the first driver to dip below the 1m25s mark when he used super-soft tyres to post a 1m24.926s early in the session.

The German's spell at the top of the times was extended when the session was halted just over 20 minutes in by Jolyon Palmer's heavy crash at the final corner.

Palmer was set to complete a personal-best lap when he lost the rear of his Renault and slammed backwards into the tyre wall on the outside of Turn 16.

The front left of the RS17 was pulled round into the wall by the impact, before the car bounced off and came to a rest in the middle of the track with substantial damage.

Once the wreckage was cleared Mercedes put Hamilton - who had already lapped within a tenth of Vettel's super-soft time on soft tyres - and Valtteri Bottas out on ultra-softs.

Their first efforts were thwarted by yellow flags thrown for Felipe Massa's Williams, which stopped as a result of a suspected electrical problem.

Bottas went quickest on his second run but lost time in the first sector and limited himself to a 1m24.176s.

Hamilton then blitzed that with a 1m23.620s, less than a tenth slower than the fastest ever lap of Albert Park - Vettel's 2011 pole time. 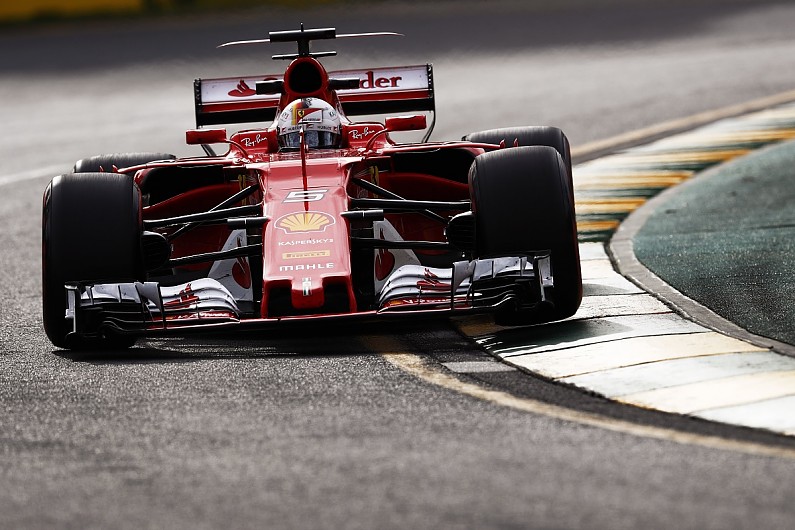 Mercedes' hopes of a second Friday practice one-two were dashed when Vettel squeezed ahead of Bottas on a 1m24.167s, but his 0.547s deficit to Hamilton is disappointing after Ferrari's impressive pre-season testing pace.

Kimi Raikkonen was a further four tenths adrift in the second Ferrari and only just ahead of the Red Bull of Daniel Ricciardo, the last of sub-1m25s runners on a 1m24.650s.

Max Verstappen ran wide exiting Turn 12 on his first lap on ultra-soft tyres and the bumpy ride over the grass and gravel damaged the floor of his RB13.

It meant his best time of the session, a 1m25.013s, was his earlier effort on super-softs.

Fernando Alonso gave McLaren-Honda further encouragement in 12th, 2.3s off the pace, while Stoffel Vandoorne was one of the busiest drivers of the session as the alliance's recovery from a terrible pre-season continued.

An unknown problem for Kevin Magnussen limited the Haas driver to just six laps, while Marcus Ericsson caused a late yellow flag when he beached his Sauber in the Turn 6 gravel.