Fernando Alonso was reminded of his test with Jaguar in 2002 when he drove the unbranded, green-livered Aston Martin Formula 1 car for the first time in Abu Dhabi.

Ahead of his move to Aston Martin for 2023, Alonso was permitted to complete a first run with the team earlier this week in the post-season test at the Yas Marina Circuit.

Alonso completed 97 laps in the Aston Martin AMR22 car, and said he was now “100-plus” per cent happy with his decision to leave Alpine for the British team after the first run-out.

But the car had to test without any sponsors due to Alonso’s existing agreement with Alpine, meaning it was stripped back to its base green livery, only featuring decals for Aston Martin, Pirelli and the FIA. Alonso also had to wear black overalls and a dazzle camouflage helmet design for the day.

When Alonso first walked in to the garage alongside Aston Martin ambassador and former grand prix driver Pedro de la Rosa on Tuesday morning, both realised it was similar to when he tested for Jaguar in 2002.

“We entered the garage this morning together, and we saw the green car,” Alonso said when asked by Autosport about the connection.

“We both said: ‘This is exactly as Jaguar in 2002!’ But yeah, this is completely a different project for sure.” 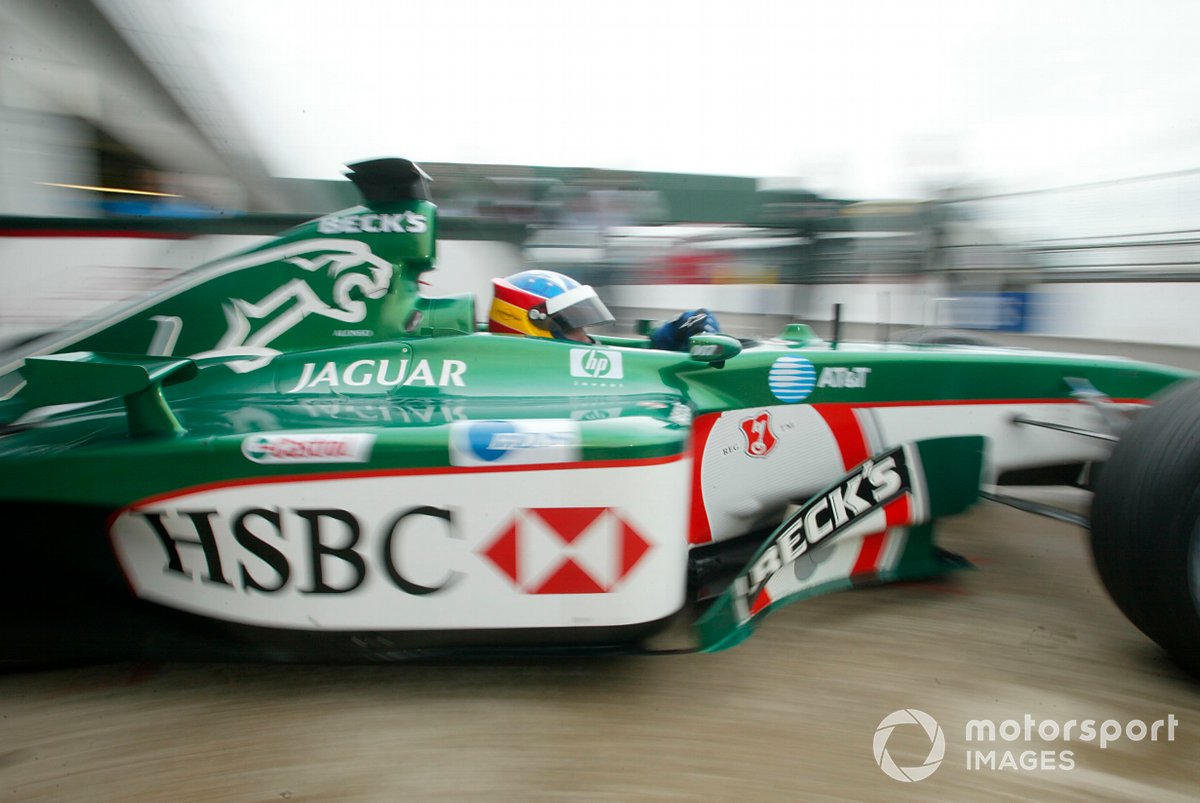 Alonso was working as Renault’s test driver through 2002 when he was drafted in by then Jaguar F1 boss Niki Lauda to complete a test in the R3 car at Silverstone at the end of May.

The season saw de la Rosa race for Jaguar alongside Eddie Irvine, but the team struggled for form, scoring just eight points and finishing seventh in the standings, its results only improving after introducing a B-spec car mid-year.

“This morning when Fernando came, we were looking at the car unbranded, and I joked with him because back in 2002, we did a test with Jaguar,” de la Rosa recalled in Abu Dhabi on Tuesday.

“I was racing there. They got Fernando in to say how quick can this car go, because Niki was starting to think myself and Eddie were just having fun there!

“The car was unbranded, green, he had a completely white overall, now he has black.

“I looked at him and he said you remember? And 20 years later, it’s exactly the same scenario: a green car, in unbranded overalls.”

At the time of his test in 2002, Alonso was being linked with a potential move to Jaguar in the Spanish media, and although he set the third-fastest time of the test at Silverstone, he maintained he was “only thinking about Renault” for the future.

Renault would ultimately hand Alonso a race seat for 2003, when he became the youngest race winner in F1 history before going on to win championships with the French manufacturer in 2005 and 2006.