As the resurrected Mercedes factory team floundered so often in its first three years back in Formula 1, it produced few truly successful technical developments.

But with its new lease of competitiveness in 2013, Mercedes' design has attracted renewed interest. One area that has piqued particular curiosity is its unique complex interlinked suspension, christened 'FRIC' by the media.

It isn't a brand new idea, merely a development of a system Mercedes has run since 2011, but it successfully offers the aerodynamic and low-speed benefits of the long-outlawed active suspension systems while staying within regulations that stipulate passive suspension.

An F1 car's suspension has to look after the chassis in two main modes: heave and roll. Heave is when the car is moving up and down vertically, when this occurs at just one end of the car, it's known as pitch. Heave tends to be caused by the car's aerodynamics compressing the suspension at speed.

Pitch is caused by braking or acceleration, anyone with a motorcycle or softly sprung car will know the nose down attitude the vehicle takes when the brakes are applied rapidly.

Roll is when the car tips over in corners from centrifugal force, one side of the suspension rises and the other side falls.

Lastly, with ground clearances at the front of the car being reduced to the minimum, any pitch will reduce the front ride height to zero and wear away the legality skid block (or plank) under the car, causing potential scrutineering issues after the race.

On a conventionally suspended car, the parts to control these movements are purely mechanical. Each end of the car may have: springs and damper for each wheel, then elements linking each side left-to-right together, such as heave elements with a third spring, an anti-roll-bar, a roll damper and sometimes an Inerter.

Tuning these parts requires a changing of the spring element or switching to a different damper specification. In terms of limiting each of the suspension modes individually with a fixed effect, mechanical suspension works perfectly well.

However, these suspension modes are rarely taking place individually and mechanical suspension does not link the rear suspension to the front. This limits the way teams' vehicle dynamists can control the cars' attitude, potentially costing tyre and aerodynamic grip.

In the eighties, Lotus found the solution in a fully active suspension, run by electro-hydraulics and featuring none of the conventional mechanical elements. This was followed by Williams's early reactive ride system.

These heavy and complex systems were ahead of their time and were soon dropped for mechanical suspension. There was a lull in active technologies, so teams started to look at simpler passive hydraulic systems. Many teams in the late-eighties and early-nineties investigated such systems. Adrian Newey recently commented that the Leyton House March team tried rear heave elements linked to the front dampers to reduce pitch under braking.

Only when Williams reintroduced its fully active suspension did the concept really take off. Active technologies such as this were subsequently banned and teams had to resort to passive suspension.

Many of the rules to outlaw these technologies remain in the rulebook today. The challenge for the current designers is to design a passive system that is legal within the regulations.

In the early nineties, Tyrrell tried a hydraulic system on its car, called hydrolink. This was initially a way to decouple roll and pitch at each end of the car. It was underdeveloped and the subsequent plans to link the systems front to rear were never realised.

Fast forward over a decade and no teams were known to be running any form of suspension-linking with hydraulics.

It was most likely Renault that reintroduced the concept back in 2009. Its system was simple, merely linking the front and rear suspension together with hydraulic elements. This set-up worked on top of the conventional mechanical suspension and only controlled pitch, preventing dive under braking and squat under acceleration.

Being quite a simple solution, it was widely copied and now most of the current teams use it. But this is far from the fully interconnected system that the active era allowed, as it does not provide roll control.

Mercedes then took on the simple front-to-rear interconnected system and developed it into a fully integrated system, totally replacing the car's conventional suspension.

It was introduced in 2011 and has been on the car ever since. The system has been dubbed 'FRIC' by the German press, but it's not clear if this is the team's own term. It's something of a misnomer as the simpler Renault-style systems are front to rear connected. Rather the Mercedes system links all four corners of the car, controlling roll and pitch, not just individually but combining the effect when the car is in both roll and pitch simultaneously.

In concept and layout the FRIC system is simple. At each end of the car there are three hydraulic elements: a pair of elements attached to each pull/pushrod rocker control roll and a centre element linked to both rockers' control pitch. Each of these elements is linked left to right and front to rear. 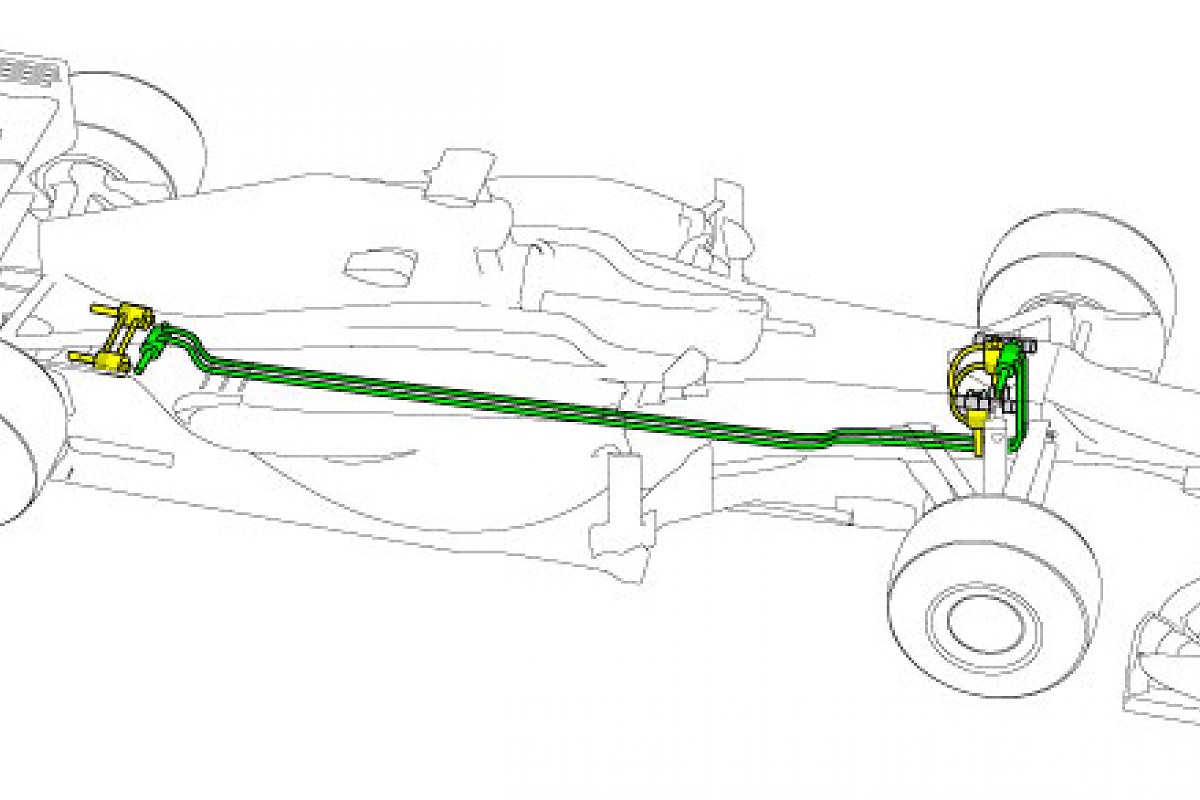 This increases the spring effect at the front and reduces it at the rear, which means the car will not dive nose down under braking. The car's ride height will remain more consistent for better control of the front wing and diffuser aero.

When the car rolls in a corner, the outer hydraulic elements will compress and the inner elements will rise. With the same effect as when the centre element is in pitch, the hydraulic fluid is transferred from one side to the other to increase the spring effect preventing the car rolling.

Both of these systems replace the springs and dampers of a normal suspension, so the system solely relies on the hydraulic fluid to hold the weight of the car. The fluid is therefore kept at high pressure within the hydraulic elements and pipework. Images of the front of the car with the nose removed show the ends of these hydraulic connectors to allow the system pressure to be topped up.

Although outwardly simple the system has far more complexity when the detail is looked at. The system needs to incorporate flow control valves to provide the spring and damper effect of conventional suspension; accumulators are needed to account for the change in volume of fluid in the system when the temperature varies.

But perhaps the biggest complexity is when the team starts to link the roll and pitch circuits together. It's possible that the system could be used simply to control pitch and roll separately, but the car is rarely in just one of these modes.

For example under heavy braking into a slow corner, the car will pitch from the braking and then roll as the steering is turned; this mode is known as warp.

In this condition you would want the pitch control to be good, preventing dive. But you would like a little roll to induce some mechanical grip.

If the pipework linking the centre elements could switch a valve to reduce the fluid transfer in the roll hydraulics, you could tune warp stiffness for slow corners. Conversely, the roll control in fast turns when braking is lighter so can be set to a stiffer setting for more aero control, which is critical in high speed corners.

With this sort of interconnectivity many different modes could be designed into the system's valving. As long as the valve switching is created by pressure differentials in the system then it is legal. The beauty of FRIC is that it is totally passive and beats all the rules introduced to ban active suspension.

It is of course quite easy to get lost in all of the potential complexity of the system. It certainly appears that Mercedes has spent some painful years setting up its FRIC system and its pace this year is probably as much to do with improved aero as getting the FRIC system tuned in.

AUTOSPORT understands that no other team has removed its mechanical suspension, as anti roll bars and torsion springs are still evident.

So Mercedes has the march on this technology. Its lap time advantage will vary by track but a couple of tenths is the likely gain. For many teams the investment is going to be hard to justify, compared to a relatively cheap proven mechanical suspension. 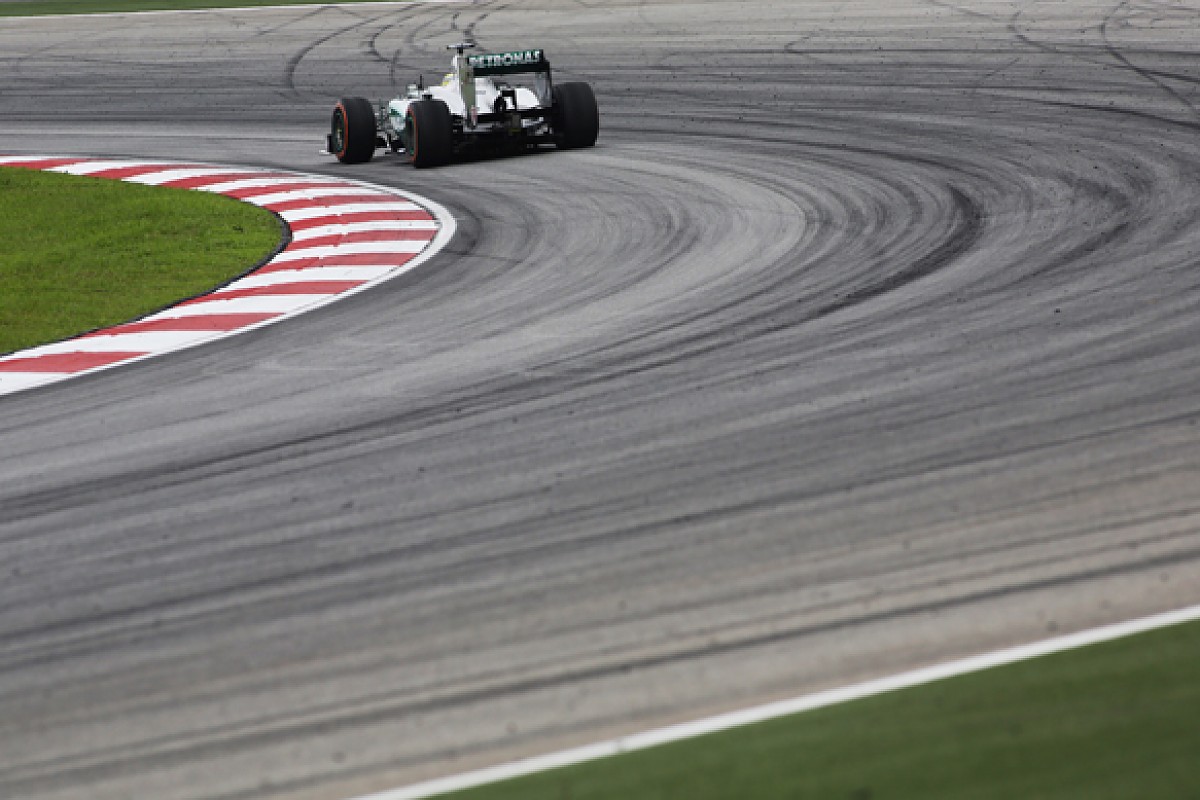