The 2013 Formula 1 field is present at Jerez and preparing to show its hand in the first winter test of the season.

Based on the previous campaigns form and any driver/technical moves over the winter, it's always possible to guess at a pecking order over the winter, only for those assumptions to be blasted away when the cars actually hit the track.

So last winter here at AUTOSPORT, we decided to trawl through our archives to unearth the shock moments of tests gone by.

What constitutes a shock? Well, in the context of our list, it can be anything from a hot favourite having a disaster to a super-fast time coming from an unexpected source. It could be a novel design proving genius - or stupid - or a top line driver turning out unexpectedly for a tiny team.

Nothing about the lead-up to the Brawn BGP01's first test inspired confidence.

There had been the Honda team's winter collapse. The 11th-hour rescue. The last minute arrival of the car at Barcelona in March 2009. Even the interviews were patchy - Jenson Button conducted his first press duties as a Brawn driver standing beneath an air conditioning unit in a walkway because the allocated suite was locked and nobody could find the keys.

Then he took to the track, and was immediately quick. Smirked references to 'glory runs' ended when nobody was able to get near him or team-mate Rubens Barrichello on the final two days. At the close, reality was dawning upon the rest of the paddock.

"I think we're f***ked," one rival driver confided. He was right.

2. McLaren raises the bar with the MP4/4 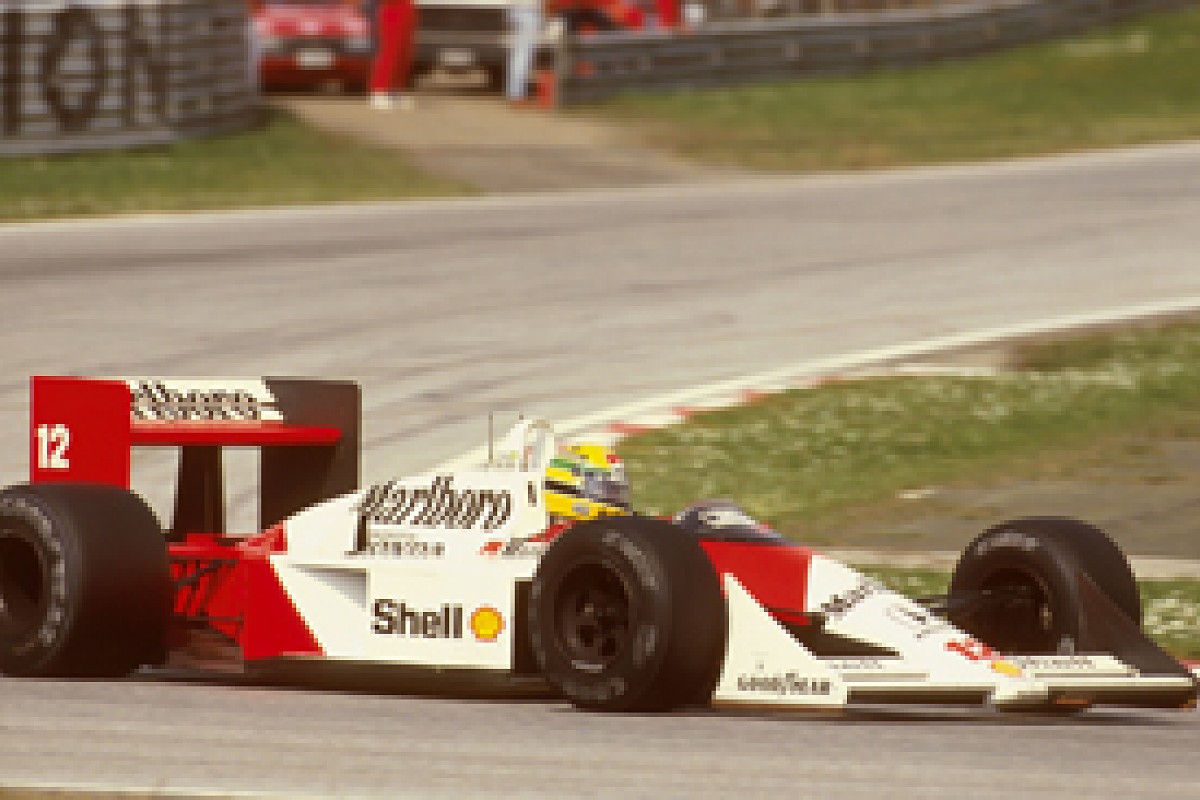 The final pre-season test ahead of the 1988 F1 season-opener at Rio was a week old when McLaren's new Honda-engined MP4/4 showed up and turned a wheel for the first time.

The car was late, as much says designer Steve Nichols because he wanted to 'leave no stone unturned' as anything else, but it made a big impact when it finally did arrive.

The best lap of the test, at which McLaren had been present with its MP4/3B test hack, was a 1m29.90s for Ferrari driver Gerhard Berger, yet Alain Prost put in a 1m28.50s on his first morning in the car. Ayrton Senna, despite his team-mate's urging to keep the true pace of the car under wraps, then went out and set a 1m27.86s, a full two seconds ahead of McLaren's nearest rival. 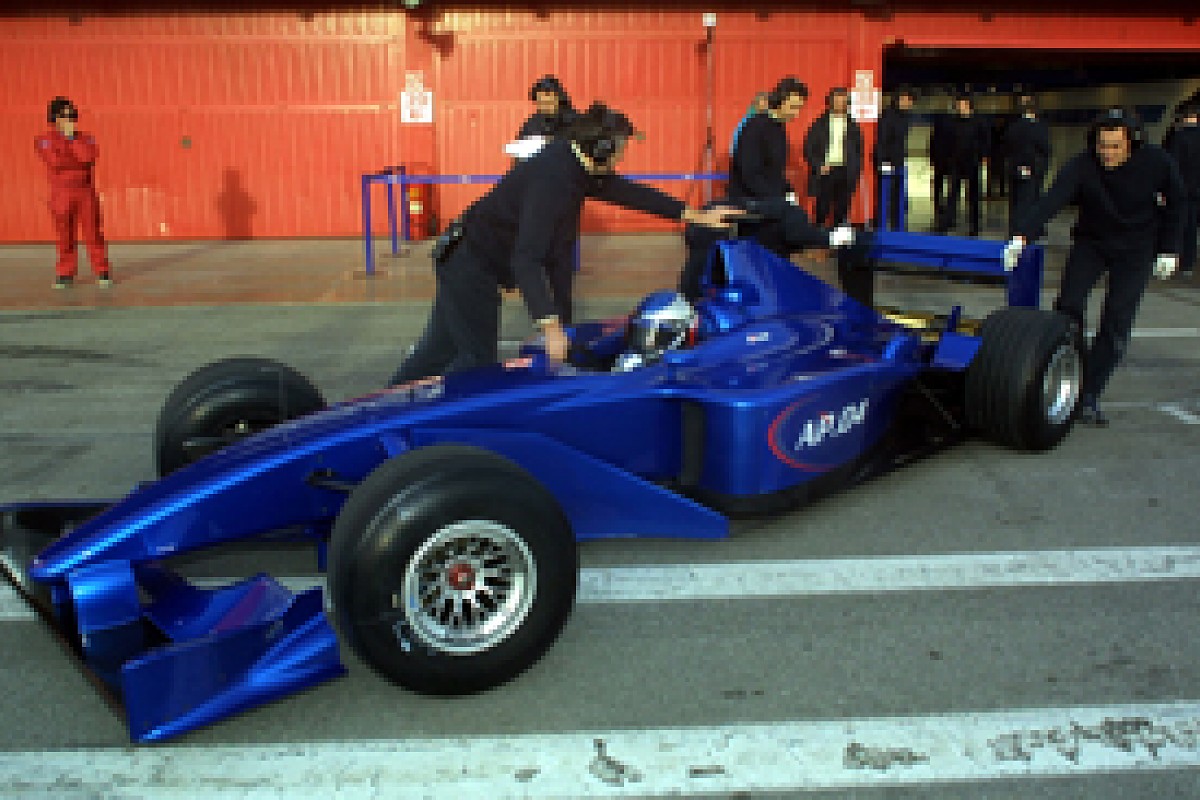 On February 14, 2001, the cash-strapped Prost team suddenly looked like the team to beat ahead of the F1 season.

Jean Alesi, having already topped two of the previous four days of testing at Estoril, lapped the Portuguese circuit over a second quicker than anybody else had managed - or would manage - during the winter.

The rumours of the AP04 running massively underweight in a bid to grab instant headlines and convince potential sponsors to part with their cash, flew instantly - especially as the car had also gone second fastest at Barcelona two weeks previously. The rumours were right too. Sponsors secured, the car showed its true colours, scoring only four points all year. 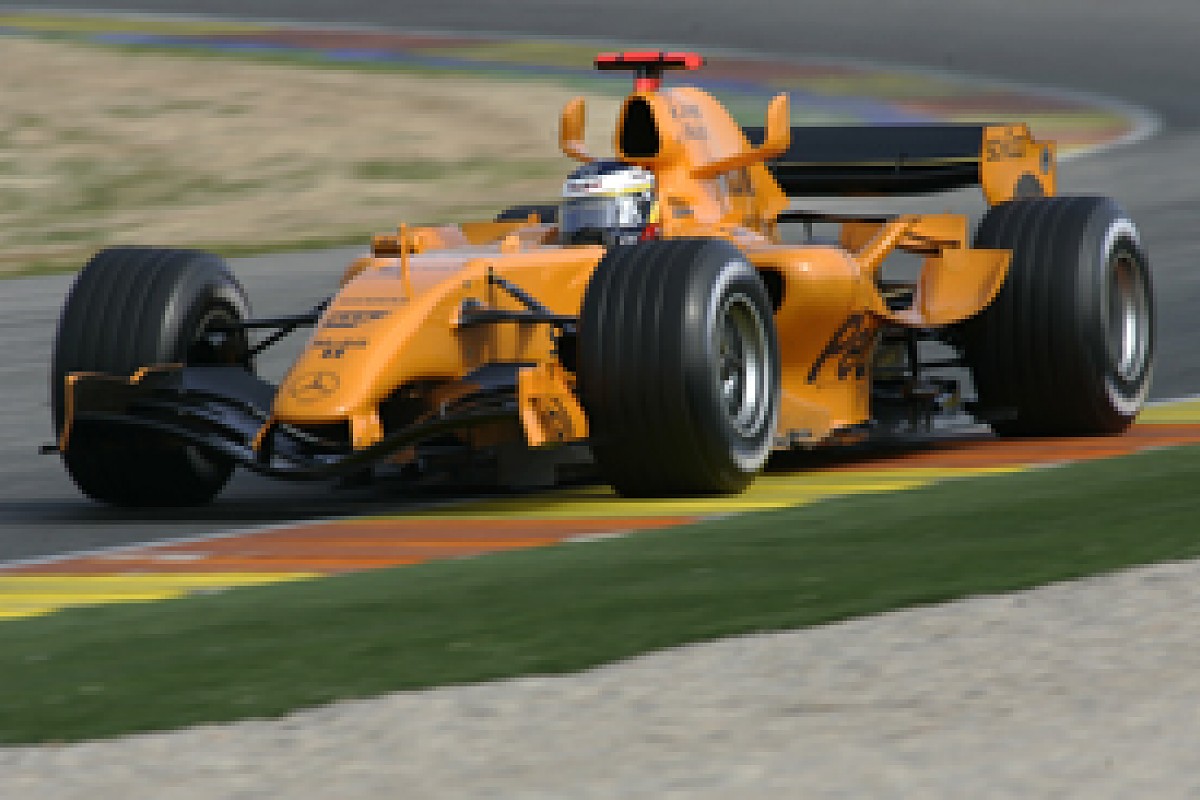 With McLaren's 23-year association with the Philip Morris tobacco company's Marlboro brand having come to its conclusion at the end of 1996, the MP4-12 of the following year was always going to look a little different when it first appeared on-track. But what nobody expected was a vivid orange livery reminiscent of the constructor's first few years in F1 during the late 1960s.

The purists loved it, and understandably so, but it was not to last; a glitzy London launch featuring band of the moment the Spice Girls, revealed that the car would instead run in a silver colour scheme that the team has retained a version of ever since. The orange did make another appearance, however, in early 2006 as both Valencia and Barcelona played host to the early-spec MP4-20 (pictured). 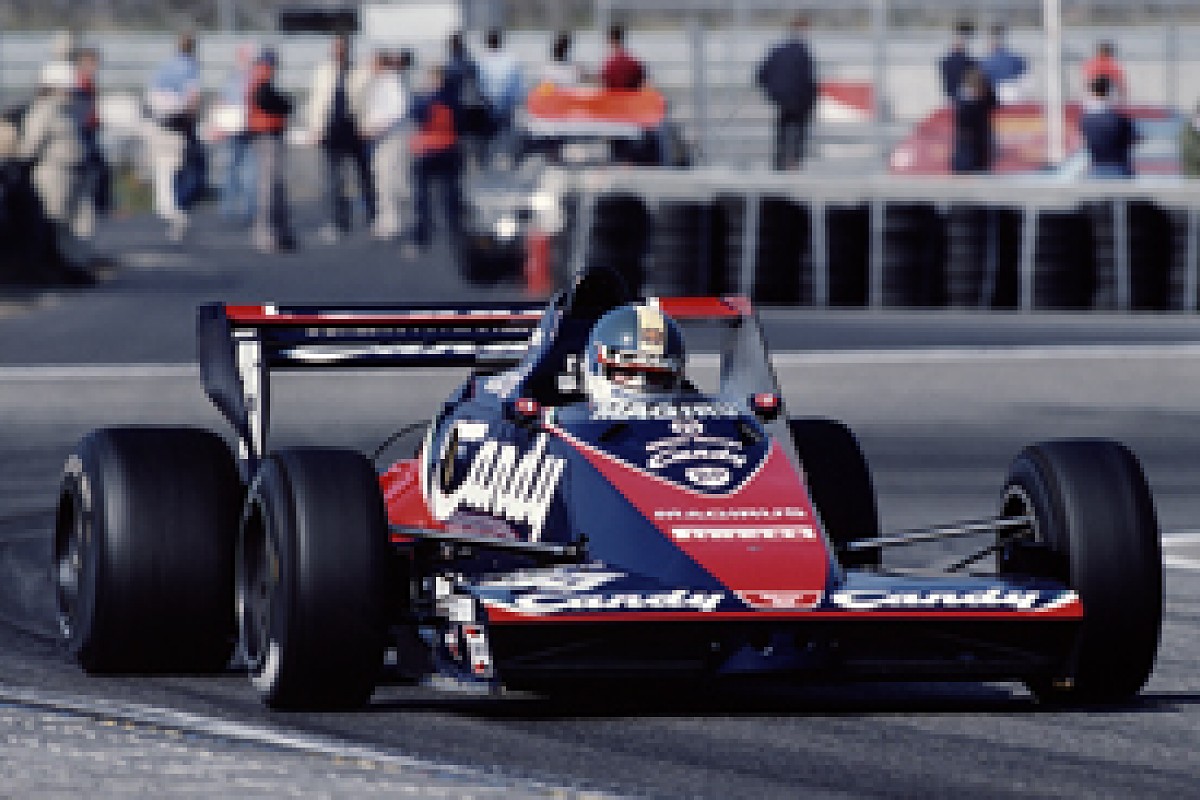 Not enamoured with 2012's stepped-nose F1 cars? Well, what about the Rory Byrne-designed Toleman TG183B?

Ice-scraper nose it may have had, but the Toleman stunned everyone at Rio in early 1983 when Derek Warwick matched Alain Prost's Renault at the top of the times. Next best, 1.5s adrift, was the Ferrari of Patrick Tambay - and the Italian team's mechanics clapped 'Delboy' as he drove down the pitlane after setting his time.

With a low budget, Toleman struggled to keep up the momentum. It was only later in the year, when the team switched to Holset turbochargers, that the cars gained the reliability to become regular points scorers. 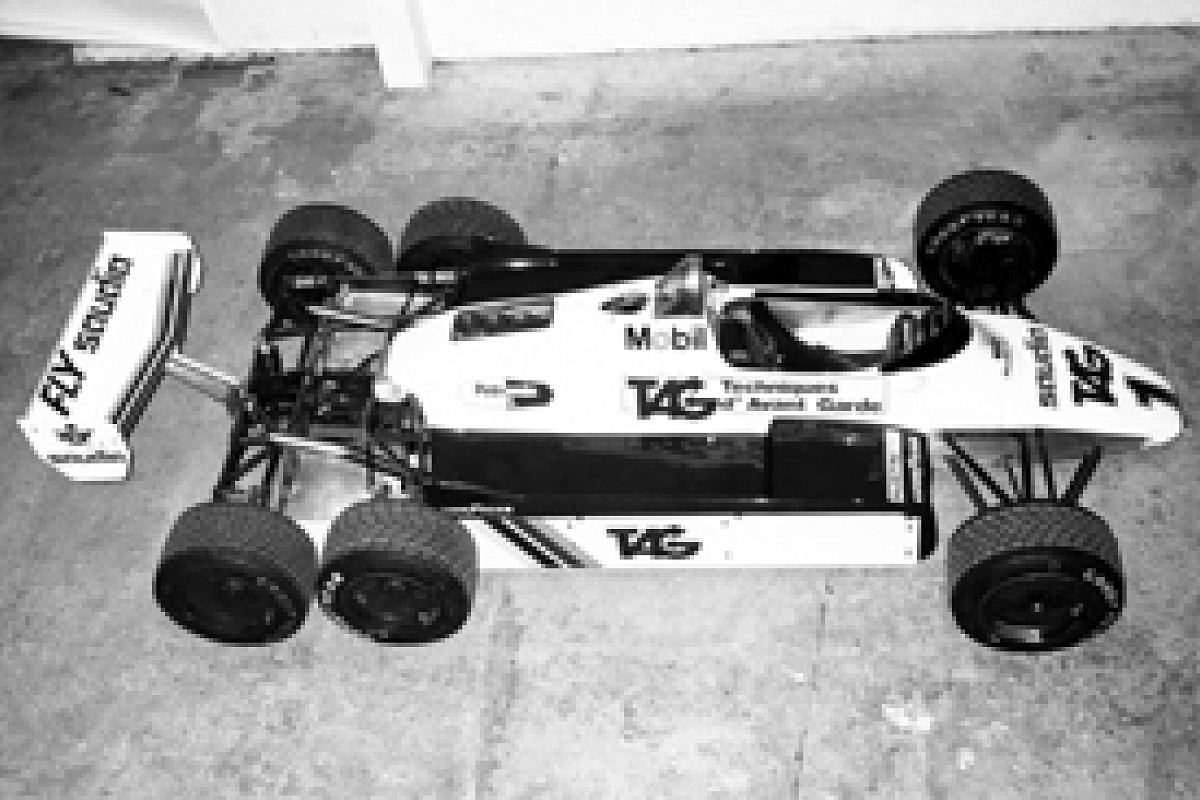 The concept of a six-wheeled F1 car was not new; Tyrrell won a grand prix with such a machine and March also tested the waters. But by the 1980s, the thought process was considered dead in the water.

It was with some surprise then that Williams, just after clinching its second constructors' world title, gave Alan Jones a car with six wheels to test at Donington Park in late 1981.

The FW07D was based on Patrick Head's assertions that the large rear wheels and tyres used in F1 were responsible for 40 per cent of a car's drag and that the extra contact patch afforded by six wheels could only be of benefit.

Despite excellent acceleration and mechanical grip, the concept looked flawed due to the difficulty of making the underbody aero work. After Keke Rosberg tested an updated car that would eventually become the title-winning FW08 four-wheeler at Paul Ricard three months later, the concept was abandoned. 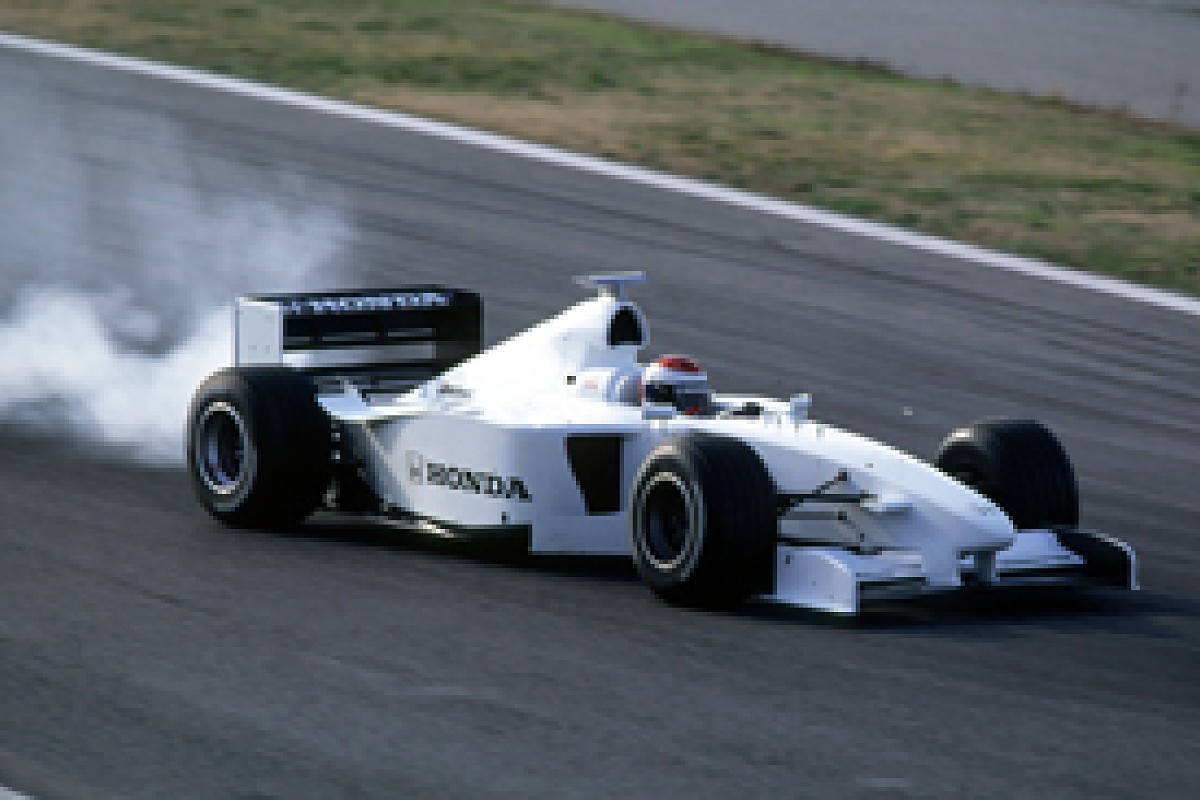 OK, so it wasn't a great surprise to see Honda take to the track with its own F1 car in early 1999, but the fact that during only its second test it set a time quick enough for 11th on the grid at the previous year's Spanish Grand Prix did ruffle a few feathers.

Led by Harvey Postlethwaite (who had also designed the Dallara-built car), with the management talents of Rupert Manwaring and the driving skills of Jos Verstappen, things looked set to move forward at a rapid rate, the RA099 car developing every time it ran. But Postlethwaite's shock death in April '99 led to the mothballing of a project that was barely eight months old. It would be seven more years before the full acquisition of BAR would lead to the Honda name becoming an F1 constructor once again.

8. The big cat fails to roar 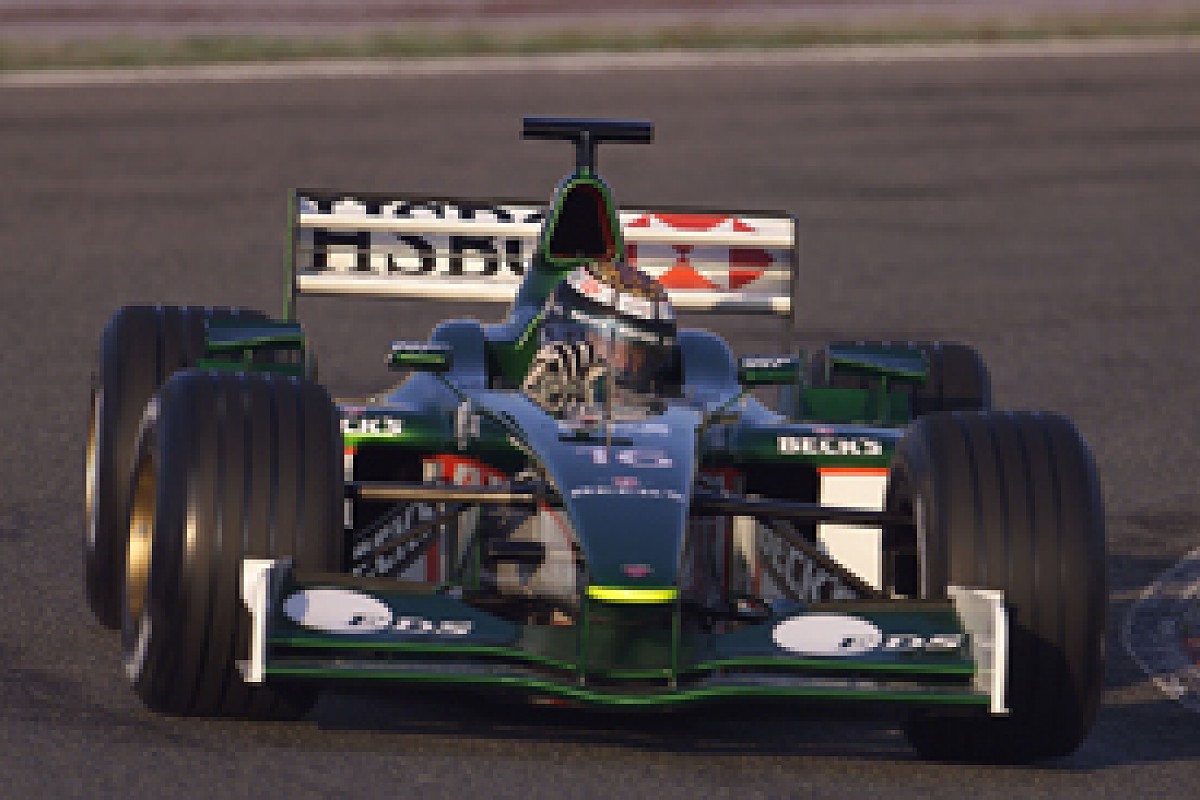 The pressure was on at Jaguar. Ford had purchased a race-winning team in Stewart Grand Prix and expectations were high for the green cars. The R1 was fast(ish) but fragile, the R2 shared the reliability problems but had little pace.

For the R3 the technical team had been rejigged with Mark Hanford brought in from the US to boost the aero programme. The new car hit the test track at Barcelona with Eddie Irvine at the wheel. As he came back to the pits, faces dropped quicker than the garage door. Irvine finally returned to the track in the afternoon with the R2's front wing fitted. Poor windtunnel correlation was blamed as the team endured yet another trying season - and yet another technical reshuffle... 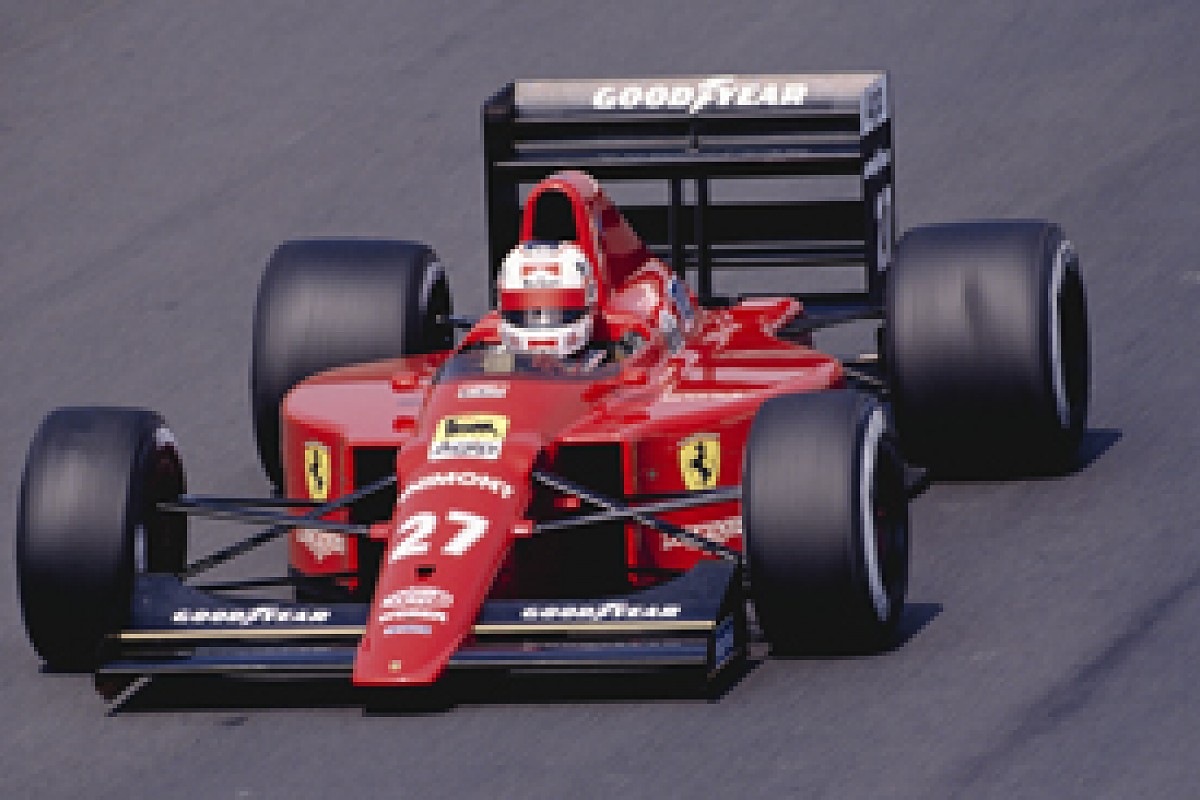 The big shock regarding the Ferrari 640 of 1989 was that it had completed just two days of pre-season testing before the season-opening Brazilian Grand Prix. It barely managed more than a handful of laps on each run, such was the flimsiness of the machine - in particular its semi-automatic gearbox, a pioneering innovation of new designer John Barnard.

That said, winter testing had been undertaken to a far greater extent by a pair of 639 Ferraris - prototype machines built specifically to put the new 'box to the test. Proving far more efficient at transferring the power of the car's V12 engine to the rear wheels, it was rushed into service at Rio and astonishingly won - giving Nigel Mansell a debut victory for the team - and paving the way for Alain Prost to give the team a genuine title challenge the following year, for the first time since '85. 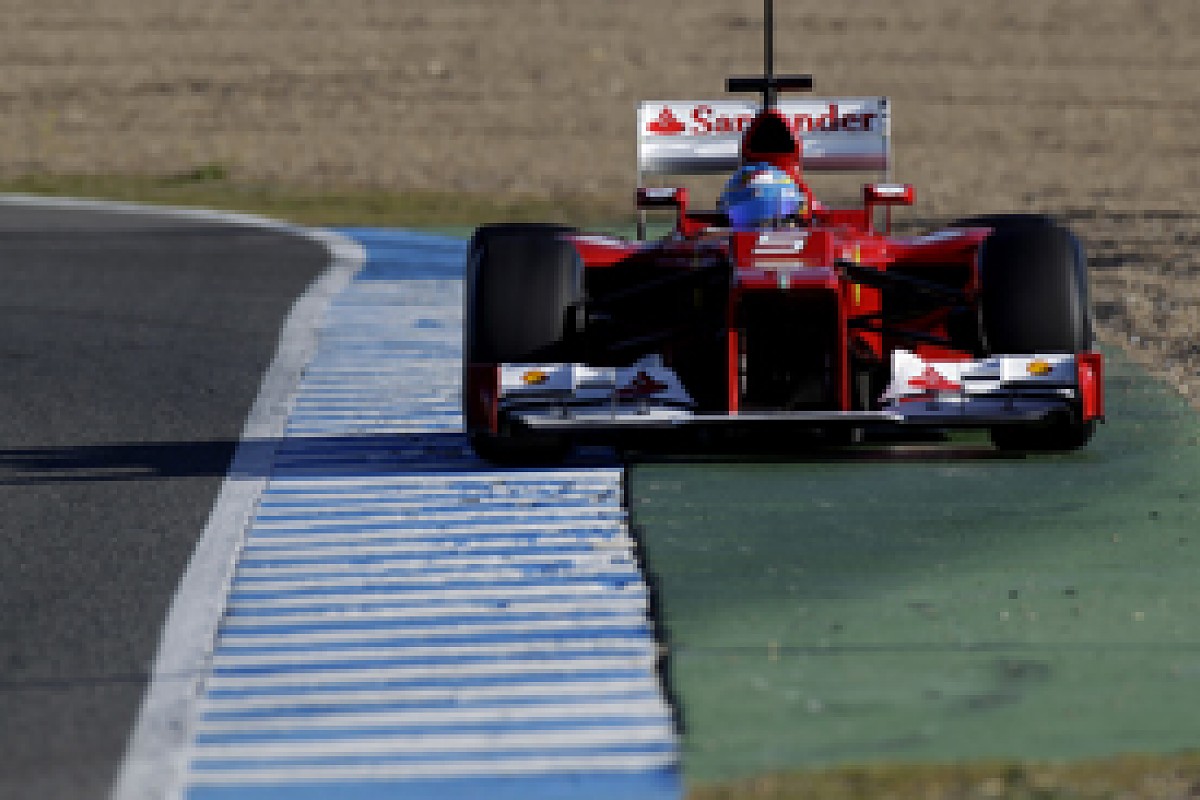 After spending the winter promising a bold and aggressive design that would allow Ferrari to take the fight to Red Bull, the Scuderia hit trouble during the first pre-season test of last season.

At Jerez, the team quickly realised that the car was not behaving as hoped, leaving technical director Pat Fry to conclude that performance was 'OK' and that he was not yet happy. That was an understatement... The F2012 duly started the season as an outsider even to make Q3.

The process of troubleshooting the car led to Ferrari concluding that its Maranello windtunnel wasn't offering the correlation to the track necessary to produce a top grand prix car.

The machine was tricky to drive during much of testing, and didn't take kindly to high-speed changes of direction early on, but to Ferrari's credit it was developed effectively enough to allow Fernando Alonso to fight for the championship.

But that first test outing at Jerez cast the die for what was a tough season for Ferrari, one that it has taken steps to prevent a repeat of in 2013.