It's the summer of 1992, when the whole of Britain it seemed, adored Formula 1, or at least its runaway world championship leader Nigel Mansell. The Williams man had won six of the season's first eight races and was overwhelming favourite both to take his first world title and to win the British Grand Prix for the second time on the spin.

Mansellmania was at fever pitch come race day at Silverstone and the sun was blazing - the atmosphere electric. Respected F1 journalist Peter Windsor was the Williams team's manager at the time, and in the second part of our special exclusive, AUTOSPORT goes back in time with him to relive his experiences at the centre of this extraordinary moment in British racing history, 20 years on.

I'm up early - 5:45 - and driving down empty country roads towards Silverstone before 7:00. There is an after-party feel to the air. AA signs. Some litter. Smoke mixed with a little early-morning mist. Traffic is light.

The boys have already opened the garage. I have a sniff around, wishing them all good morning. Robbie Campbell and the guys have worked wonders on Riccardo Patrese's car after his qualifying smash: it's all set to race. Out the back of the garage, Jim 'Jimmy Jock' Walter is shuffling fuel churns. RS84 fuel for qualifying, RS83 for the race. "Watch out for the RS85, Jimmy Jock," we joke. "If it can do that to copper and bronze imagine what it can do to you!"

And there's Steve Coates, already laying out his sets of Goodyears, ready for heating and pressures. "Morning Steve. Good day for a motor race."

In groups, the boys enjoy an English race day breakfast.

In the garage, Nigel's car sits calm and quiet, its new RS3C engine now mated to a three-plate clutch (the two-plate having been used for qualifying). I try to think of everything that might go wrong and of the order of business. Frank will arrive at about 10:00. He has all his spare VIP passes with him. There'll be sponsors' guests in the garage. The Drivers' Briefing. Nigel and Riccardo to sponsors' suites. Then the countdown on the grid. Then the pitstop. Assuming Nigel's leading, we're planning one failsafe for Nigel and possibly one for Riccardo, depending on how Nigel's tyres are looking.

I stay in the garage. The boys continue to fettle the cars. We put out the Tensa barriers in preparation for the Pit Walkabout. My Mum and Dad will be somewhere in the crowd; must watch out for them.

Nigel appears, wearing shorts, t-shirt and cap. He says hi to the boys and asks how the engine change went. The support races begin. One Dario Franchitti finishes third in the Vauxhall Lotus race (despite damaged front wing!) and Jeff Allam wins the BTCC round from Will Hoy and John Cleland. The drivers' briefing is short and sweet. As we leave, Nigel says, "Amazing, eh? All the people. Here. Today. We've come a long way..."

Soon it is time. Thirty minutes to go. I click my stopwatch. Nigel, in blue Sparcos, straps on his neck collar - the same one he has used since 1977. Next the Arai helmet. Then Nigel steps into the FW14C, with Stuart holding the belts before strapping him in tight.

The Renault engine starts. There is a pause; and then Nigel is easing smoothly onto the pitlane. In the background I can hear the grandstands roar.

Nigel pulls up to his grid slot on schedule. We remove the bodywork, fill the radiator ducts with dry ice and wrap the tyres in MA Horne's heated covers. David Brown speaks first.

"OK. There's a lot of paper and stuff. Check the radiators."

"Feels okay. David, give me another half pound on the left front."

David instructs Steve Coates to do exactly that.

Nigel climbs out and removes his helmet. I ask him if the balance feels okay.

"Not too bad. Different from yesterday." He looks strained; he has the look I know from hundreds of races past. It is the look of effort about to be applied. He isn't relaxed; he isn't joking. He just wants to get the thing done.

The pitlane closes. Fifteen minutes to go. Prince Michael of Kent is introduced to Nigel and I introduce some of the boys to the Prince. The Irish Guards prepare to leave. The crowd is huge, the atmosphere almost overpowering. I look up at the grandstands, where Mansell signs and Union Jacks predominate. Again, fleetingly, I think of the back half of '78, when Nigel couldn't even land a touring car drive. About the only thing he had to his name - apart from the Brush Fusegear FF Championship - was a 'Dish of the Day' award from the Silverstone lady marshals. 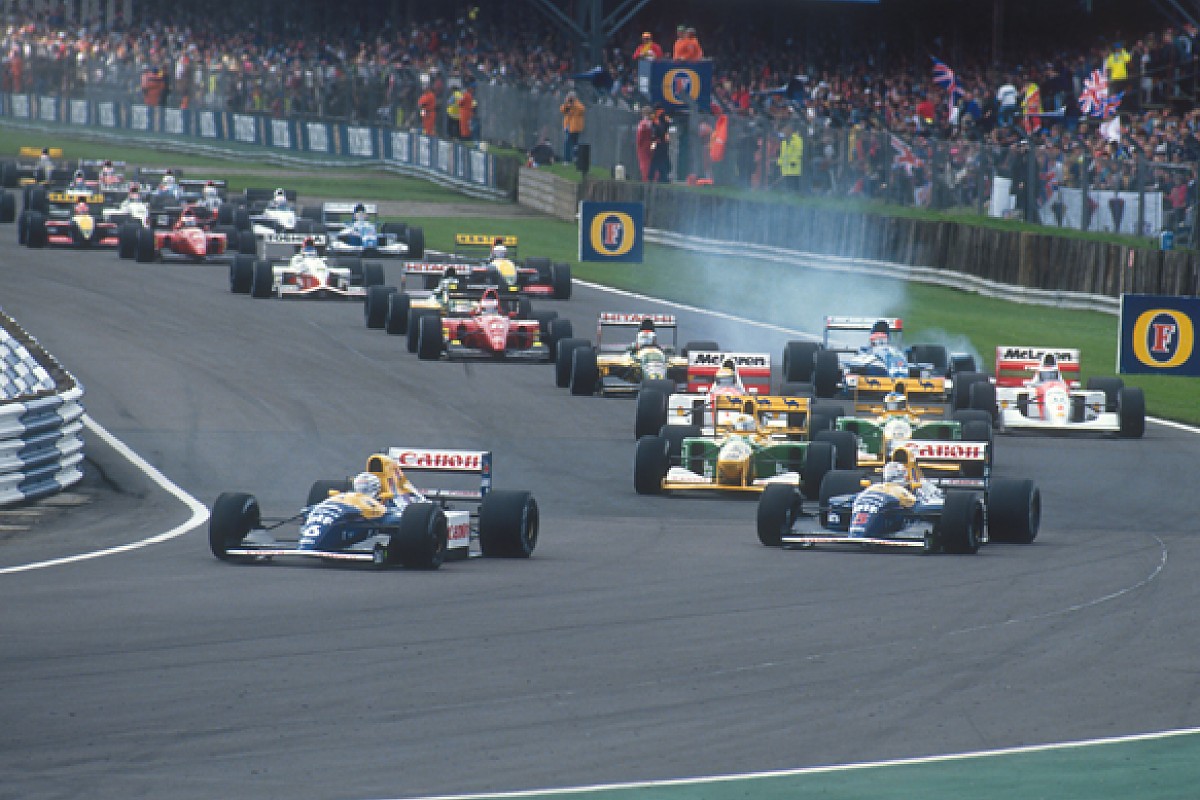 What can go wrong? The First Corner. The First Lap. My pulse rate is at about 120 and climbing. I carry a slave battery back to the garage. And then we wait, crowding around Frank's small TV monitor.

Riccardo makes a slightly better start and takes the lead into Copse from his inside line. Then Nigel, seemingly with grip to spare, darts to the right on exit and effectively takes the inside for Becketts - a move Riccardo doesn't expect and which causes him quickly to back away. By the exit of Becketts, Nigel is leading by three or four lengths. He's clear and safe.

Up on the pitwall, the race for me passes in a blur of blue, yellow and white. The laps go by quickly at Silverstone; you're at half-distance before you know it. I ensure that Colin Hessey, working the pitboard, knows exactly what DB wants him to say.

And so we go ahead with the planned pitstop for fresh tyres. Even if we're unrushed Nigel can still retain his lead. L3. L2. IN. It is lap 30 of the 59-lap race.

We take our time. There are no glitches; we ensure that everything is solid. Twelve seconds. Nigel accelerates away (no speed pitlane limits!) just as Riccardo is leaving Woodcote. Easy. And Nigel's tyres are fine. No need now for a Riccardo stop.

The last few laps take forever. We had a near miss with the fuel in race one, in South Africa, when Nigel finished the slow-down lap with only one litre of Elf on board, so from Mexico onwards we have been measuring the fuel in terms of weight (taking into account density and fuel temperature) in order to improve accuracy. The new system works well - but the last few laps of any race are always tense.

Now Nigel appears out of Woodcote. The chequered flag flutters. Nigel weaves over towards us, waving his arm high. The crowd can be heard above the Renault's trailing engine note - and I catch a glimpse of someone running across the track even as Riccardo bursts into view. It is close. Oh-so-close to disaster.

We all shake hands. I give Sheridan, who did so much to ensure Nigel's return to Williams, an extra big hug.

In the garage, we watch the track invasion both in awe and in fear. The reaction of the crowd is spellbinding but now we're worried about human injury or possible car damage. Squeezing through the safety gaps in the fencing to greet Nigel, fans pour onto the circuit, little realising that some mid-fielders are still racing. Nigel grabs a Union Jack from someone and waves both arms high, carrying the flag, as he heads slowly down Hangar Straight. Eventually the crowd brings Nigel to a halt. Helmet on, he is hoisted high - but someone has already been injured:

"He was a huge bloke," said Nigel afterwards, when we gathered in the garage. "He told me he was delighted to have been hit by me!"

Renault's Christian Contzen represents the team on the podium but Nigel is the conductor. He rouses the crowd - then he hushes them as the anthem is played. We stand below, caught in the throng. The relief and the emotion is indescribable.

Much later - long after the packing-up has finished, I join Nigel in his compound. We embrace for a while but of words there are few: this is a moment merely to savour and to remember. And we are all exhausted. Physically and mentally.

At around 11:00pm I drive home to West Ilsley in the Renault 19, soaked in emotion. Next stop: the Hockenheim test and then the German GP. An early start tomorrow. Must get the vans back to the rental company before Frank arrives. Frank hates to see rented vans or tractor units outside the race bay...

You can watch Peter Windsor's on-line F1 TV show, The Flying Lap, every Wednesday, and follow Peter on Twitter @peterdwindsor