Adrian Newey is an intense competitor but, other than those times when someone has sprayed champagne in his face, how often have you seen him with wet eyes?

At the end of the Belgian Grand Prix though - a Red Bull 1-2 - he sat quietly on his pit stool for a few extra moments, tears in his eyes. It wasn't delight, but relief.

Newey did not much enjoy his Sunday afternoon at Spa. His concern began post-qualifying, after which the option Pirellis of Sebastian Vettel and Mark Webber were badly blistered.

The top-10 qualifiers, of course, must start the race using the tyres on which they qualify. Pirelli told Newey that failures were imminent.

"Racing tyres have blistered since the '60s, but that wasn't the issue," he explains.

"The issue was the structural integrity and, because the blisters were so close to the inside shoulder where the tread meets the sidewall, Pirelli was telling us after qualifying that our tyres were very marginal.

"At five o'clock on Saturday they wouldn't say whether it was half a lap or five laps, but they were going to fail very soon.

"There was structural damage in the junction between the tyre wall and the tread.

"You can take the performance aspect on the chin; it's the safety angle that was worrying."

Red Bull wanted the FIA to consider the tyres damaged, which the rules say can be changed if, for example, you have a puncture.

There had been precious little dry running on Friday and this was a situation like Indianapolis '05, Red Bull claimed.

The complication was that they had run more than Pirelli's recommended maximum four degrees of camber.

That can afford you more tyre temperature to assist qualifying, but at the risk of damaging the shoulder.

Others, who had not blistered their rubber, would say that Red Bull's problem was therefore self-inflicted.

If they were permitted to change tyres without penalty, there would have been ructions.

"We were just a hair over," Newey says. "Four and an eighth or something [the FIA measured 4.36 degrees].

"But obviously if we'd known there was a safety concern we wouldn't have done it.

"We'd had dialogue with Pirelli, they were in full knowledge that we were slightly over and didn't seem concerned about it."

Red Bull could have changed the tyres and set-up if it had wished, but it would have put them in breach of parc ferme regulations and meant starting from the pitlane with all realistic chances of victory gone.

There was long discussion involving everyone - management, engineers and the two drivers.

Ultimately, though, it would be Newey as technical director who would shoulder responsibility. Not a nice position to be in.

You might think that in such a situation the solution is to leave the decision to the man whose backside is in the car when it's doing 200mph on a dodgy tyre.

But that's abdicating responsibility and it's not what happened.

"I don't think you can do that," Newey says. "I took the decision to make some changes and go to much higher tyre pressures to try to make it safer, and suffer the performance loss from that.

"Then do very short runs on those qualifying tyres. Mark's were more damaged than Seb's, which is why we brought them in after three and five laps respectively."

Newey added that the reason Red Bull didn't change the camber after it experienced blistering in the limited dry running in Friday practice was that it was quite prepared to live with the performance implications and didn't realise there were safety issues.

If that sounds doubtful, Vettel did record competitive lap times on another set of blistered option tyres later in the race.

The other thing the team did to help the situation was to limit the use of DRS.

"Damage is a function of speed and load and with DRS it's a similar load at the front and it's only the rear that loses load and you are going a lot faster," Newey says.

"We did some internal calculations combined with the results Pirelli gave us as to how an increase in pressure would help the tyre life."

Some of you may have seen the documentary Grand Prix: The Killer Years on BBC television recently.

If you did, you will recall the poignant words from Dave 'Beaky' Sims, who was looking after Jim Clark's Lotus when the Scot perished in an F2 race at Hockenheim in 1968.

While Sims was in no way responsible, he admitted it's something that's with you for the rest of your days.

Similarly Newey, a man of integrity, was deeply affected by Ayrton Senna's accident at Imola 17 years ago, when Adrian was chief designer at Williams.

Post-race at Spa, Martin Whitmarsh, Newey's old colleague from the McLaren days, put a hand on his shoulder and they exchanged knowing looks.

Lewis Hamilton's tyre had also been marginal at the start and they both looked like men who'd been places they didn't want to go.

"I have to say it's one of the scariest races I've ever been involved in," Newey says. "Heart in the mouth stuff.

"First and foremost, our duty is to driver safety.

"You're trying to make that call as to what's going to make the car safe without excessively handicapping yourself from a performance point of view.

"Frankly, at the end, I was just very relieved..."

This being Spa, it barely needed saying that had a tyre failure occurred, it would likely have done so at enormous speed - the run up from Eau Rouge to Les Combes, into Pouhon or, worse, Blanchimont...

Having endured an awful start when the anti-stall kicked in, and escaped the risk of tyre failure, he further risked life and limb by going down the inside of Fernando Alonso into Eau Rouge.

Surely the time to be doing that is when you're chasing a contract extension, not when you've just signed one!

They should sign him for the next 10 years after that...

"I was still charged with frustration from the start," Webber says, "and when I came out behind Fernando we were obviously very, very close going down to Eau Rouge.

"I knew Fernando would have been using some KERS, so I did as well. I got a tow and thought that if I could get down the inside I would have the line.

"Both of us are very experienced, we don't give much too easily, and it's even more rewarding when you can do it with someone like Fernando.

"He's a world-class driver and knows when enough is enough. My attitude might have been different with someone else.

"I was breathing in at the bottom. One of us had to lift and I had a slightly better line, so it was him..."

I think a lot of people breathed in when they saw what was shaping up. I'm sure there have been a few similar examples over the years in various categories, but I can't recall many.

The one everyone does remember involved a couple of Porsche Group C cars, driven by Jacky Ickx and Stefan Bellof.

And, in case you weren't following the sport in 1985, Bellof didn't quite get down the inside and he died as a consequence.

As Sir Alex Ferguson might have said, it was squeaky bum time at Spa on Sunday afternoon, a time for brave men.

And with a lot more at stake than just the three points. I'm happy it worked out for all concerned... 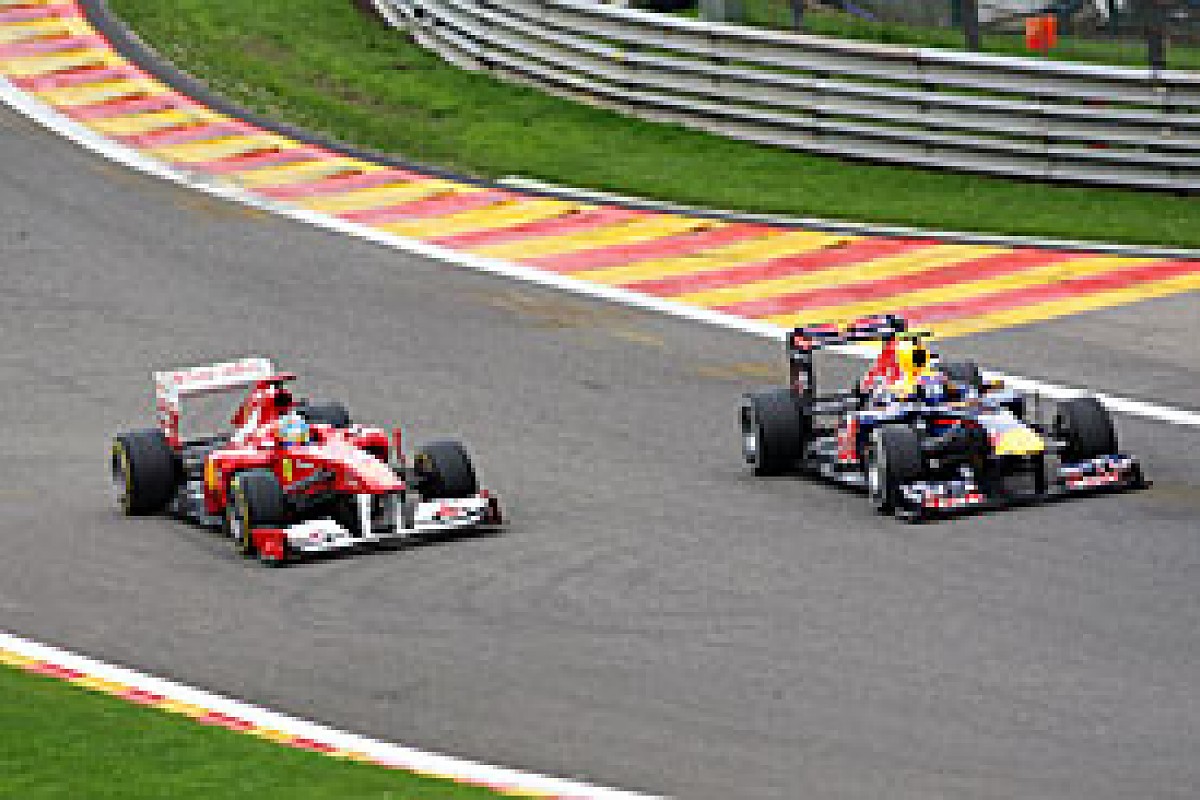