Not since the 1978 Canadian Grand Prix could many in the Formula 1 paddock remember a weekend where hats, scarves and warm winter jackets were a must.

The micro-climate that surrounds the Nurburgring did its best to produce a quite weird German GP weekend, with the elements ranging from glorious sunshine that left some with bright glowing faces, to the chilly race day morning where artic gloves were needed. "It's been colder than winter testing - and I just hope we don't need these big coats again this year," smiled Christian Horner before the race.

Thankfully the weather did nothing to distract from what was a pretty social grand prix - as teams and sponsors made the most of the impressive facilities at the revamped Nurburgring to throw on the entertainment.

There was a music party down at Virgin Racing; while Casio put on a launch event for a new watch with some media karting and truck simulator action.

But the highlight of the weekend for many was a welcome barbeque party hosted by Mercedes-Benz just outside the circuit on Thursday night. Having laid on some music; and somehow sorted out the weather to keep the rain away - a vast majority of the paddock made the trip over for a bit of a chin-wag ahead of the weekend.

As well as Mercedes-Benz team members - a host of drivers and bosses from other teams all spent their evening there. Mark Webber was seen in deep discussion with Pedro de la Rosa and Nico Rosberg; Stefano Domenicali was sharing jokes with Peter Sauber and Monisha Kaltenborn, and Norbert Haug was seen having a catch-up with Christian Horner.

F1 may be ultra-competitive when it comes to the on-track stuff, but there is something very cool about the fact than when the engines switch off, and the garages are shut, it's just one big community. 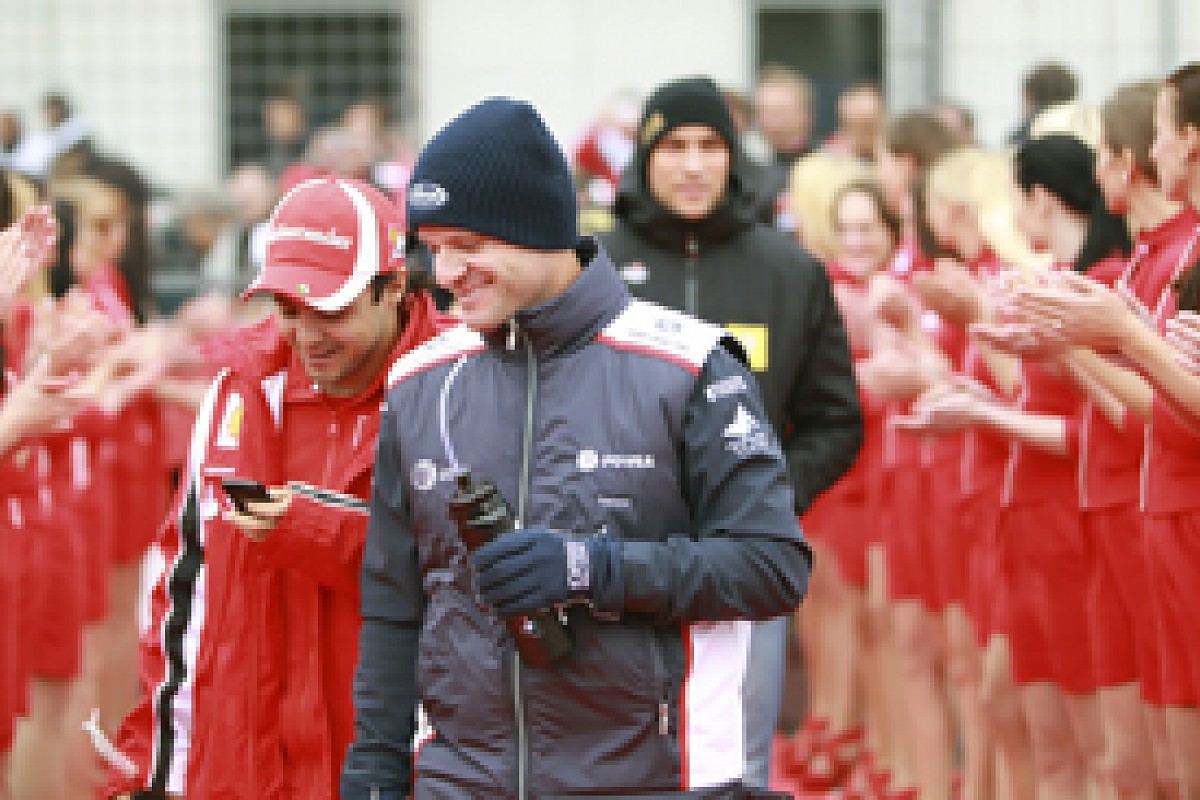 With the Formula 1 calendar having grown rapidly in recent years, and the number of flyaways now virtually matching the 'driveaways', one of the pleasures of following the crazy circus around is actually being able to get to a race and not need to get on an aeroplane.

The return of the Nurburgring to the schedule this year meant it was another one that was easily commutable - so the main mission for a lot of people in the build-up to the event was to try and secure a nice way of getting there.

For this trip I was lucky enough to get the chance to borrow a Lotus Evora S for the drive from home, through the channel tunnel and then on to the Nurburgring. Not only was it a great car for cruising down the motorway, and blasting through the German countryside, there was also something quite magical about arriving at the world famous track with a car that has a badge on the front featuring Colin Chapman's famous initials.

And the Evora itself remains such a unique car (we did not see another one on the whole 800 mile round trip) that everyone you met in the paddock was eager to find out what it was like to drive.

The simple answer each time was that it is a million times more fun than facing airport queues, security checks, cramped seats, passport control and the baggage hall - before picking up an under-powered and boring hire car. No brainer.

Now bring on Spa and the next road trip... 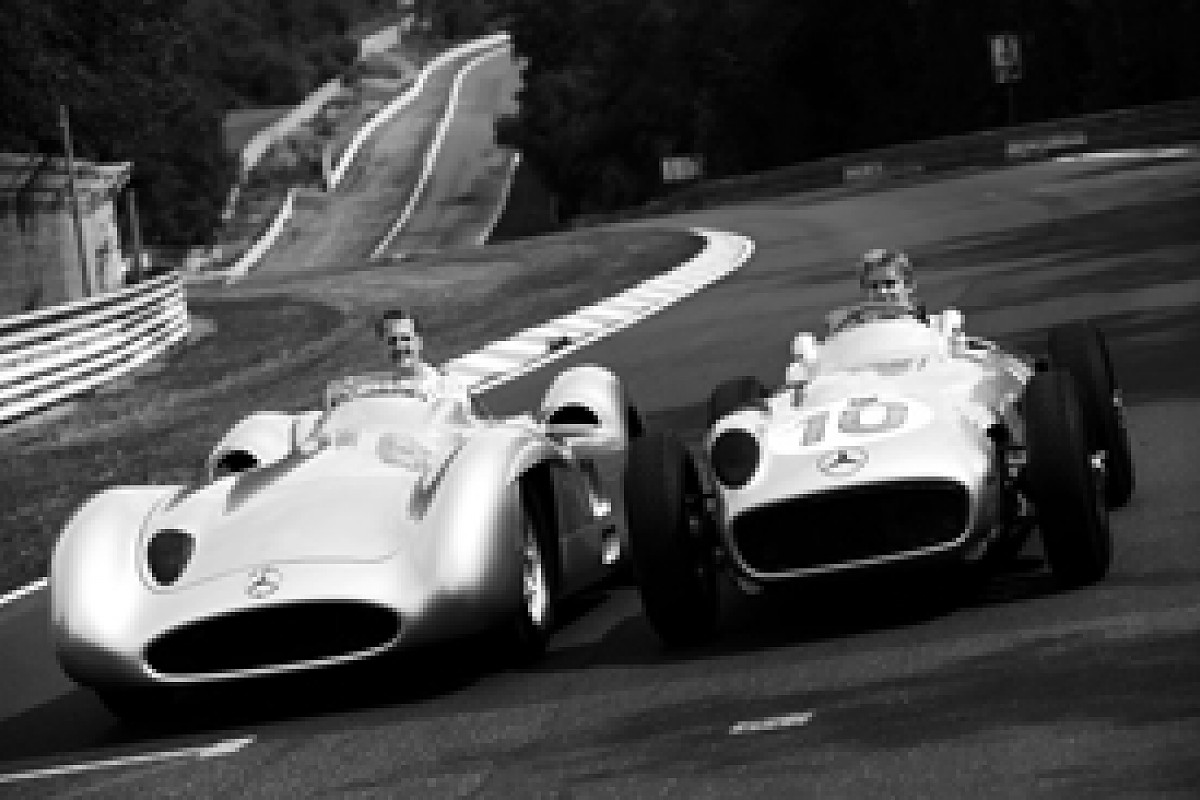 It was on the eve of the Goodwood Festival of Speed, where he was due to drive a 2010 W01, that Nico Rosberg had told me was desperate to get a go in an historic Mercedes-Benz GP car. When I suggested that if he was lucky he would get to do that at the Nurburgring Nordschleife this year, he laughed - and said 'no way!'

While Schumacher tried out the streamliner version, Rosberg got the chance to sit behind the wheel of the Mercedes-Benz W196 that Juan Manuel Fangio took to victory in the 1954 German GP on the Nordschleife.

Those familiar with the car know that one of the unique aspects of it is that, because of the large transmission tunnel that runs down the middle of the cockpit, the driver has to open his legs very wide to operate the pedals.

"Yeah, the driving position was very strange," said Rosberg. "A big steering wheel and the pedals completely right and left as there was the big gearbox in the middle, right between your legs, so it was quite strange."

But speaking to Rosberg later over the German GP weekend the thing that amazed him the most was not the technology of the day, but that racing drivers actually battled wheel to wheel with cars like these out on tracks like the Nordschleife.

"You just cannot believe they would have raced these cars, on a track like that, with no Armco barriers and just trees by the track," he said.

When I suggested to Rosberg that, had he been there in the 1950's then he would have been out there himself racing these cars, he reckoned not. Too dangerous he said.

Let's see in 50 years' time if there are mini Rosbergs telling Nico that it is crazy to think he raced his current W02, on tracks like they have today - with open wheels and open cockpits, and with loud petrol engines! Crazy!

Not everyone worships the Nordschleife - and the place can bite pretty hard if either something goes wrong or going fast is just not your thing.

On the Tuesday before the race, Adrian Sutil had a low-speed crash in a Gumpert Apollo thanks to a mechanical problem, and ended up nudging the barriers at little more than walking pace. However, the German media reports the next day suggested the crash had been much more dramatic.

"When I read the newspaper the next day, I was laughing really hard because they said I lost all my teeth and I just made it out of the carbon wreck of this car," smiled Sutil. "I thought, okay, well, that was lucky then!" laughed Sutil.

However, the best Nordschleife story of the weekend came from Kamui Kobayashi, who always makes the trek out onto the track whenever he is racing there.

This time, however, for a special treat for his girlfriend Yu he wanted to give her a high-speed lap of the Nordschleife - and it was going to be the first time she had ever been a passenger alongside him out on a race circuit. Kamui duly paid for four laps - but it didn't go quite to plan.

"We got out on to the track and after one corner she started crying," said Kobayashi. "I had to slow down and finish the lap very slow - about 60km/h. Very safe - but it was a very long lap. It took me nearly 20 minutes.

"I think I will have to sell my tickets at a discount price now. I paid 89 Euros for four laps - and only went around once!"